But those platforms aren't the only ones engaging users through video: Snapchat video views jumped to 10 billion per day, more than doubling in less than a year. And Snapchat users now watch nearly 800 hours of video content per second.

In an effort to keep that growth moving forward, Snap Inc. (Snapchat's parent company) unveiled Spectacles -- sunglasses with a built-in video camera to easily record Snaps and transfer them seamlessly to the mobile app -- in September 2016.

Looking for the inside scoop on this launch? You're in luck, because I just got my hands on a pair of Spectacles to experiment with for this blog post. I’ll tell you everything you need to know about Spectacles and their potential for impact on social media and content marketing -- featuring a few videos I recorded while taking them on a test run.

Spectacles are sunglasses with an integrated camera that records videos and syncs with the wearer’s Snapchat account via Bluetooth for easy capturing and sharing. Check out the video below of yours truly trying on the Spectacles for the first time (I was a little excited):

Users wear Spectacles like sunglasses and record video from their perspective in a new circular, interactive video format that lets viewers rotate their phones while viewing. As shown above, a white LED light will rotate to indicate that video is being recorded live. Check out the videos recorded using Spectacles below (and keep reading to see original footage I recorded using my Spectacles):

Spectacles battery life allows for an average of 100 10-second video recordings per day, and the device can charge inside of its case several times to allow for wireless charging on-the-go. Spectacles come in black, teal, or coral and can be adjusted for fit or prescription lenses.

Wait, Isn't This the Same Thing as Google Glass?

Spectacles might take you back to 2012, when Google announced Google Glass -- a wearable, hands-free computer system. That project was halted in 2015, after Google faced barriers to widespread adoption, including privacy concerns and pop culture mockery.

Luckily, Snapchat Inc. seems to be following a different playbook when it comes to the positioning of Spectacles. Most notably, the product is dedicated solely to video capturing instead of functioning as a wearable computer system like Google Glass. As a result, the cost is significantly less: Spectacles can be purchased for just $129.99.

Sure, the specs are certainly a bit silly looking -- the large lenses, bold frames, etc. -- but, at the very least, they align with the brand's colorful image. 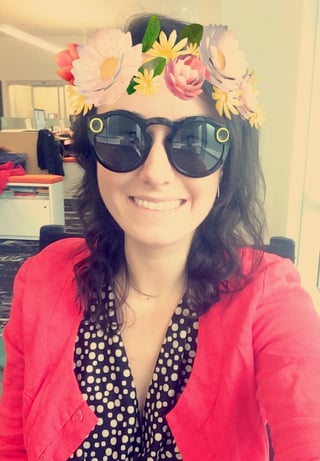 At the end of the day, they're far more wearable than Glass, which received plenty of less than positive feedback in terms of the design.

How to Get Spectacles

If you're chomping at the bit to get your hands on a pair, we've got some bad news: Spectacles aren’t sold at a traditional storefront. Instead, they’re available in limited quantity for $129.99 at Snapbot vending machines that spontaneously pop up around the country. Yes, that's right, a Snapbot.

Now there's a lot to be said about this unorthodox strategy, as Snap Inc. is disrupting both how video is recorded and how new technology brought to market.

Instead of shopping online or heading to a store, these Snapbots are being dropped without announcement or fanfare. Instead, buyers find out about Snapbot sightings via Twitter, Instagram, and word-of-mouth, then rush to queue in line in hopes that the Spectacles aren’t sold out by the time it’s their turn. Additionally, if you’re near a Snapbot, a Geofilter will appear in Snapchat letting you know: 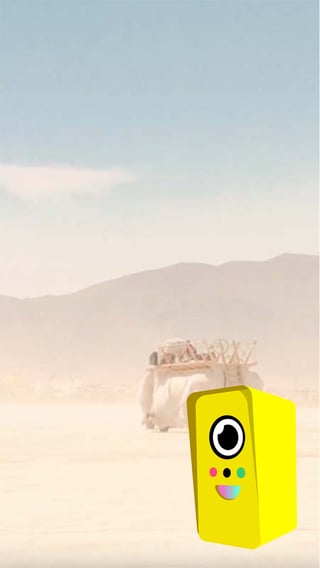 If you visit the “Find a Bot” page now, you’ll either see a map to the current location of the vending machine, or this image:

The strategy behind this interesting distribution method? Aside from the obvious appeal to exclusivity, "It’s about us figuring out if it fits into people’s lives and seeing how they like it,” Snapchat's CEO Evan Spiegel told the Wall Street Journal.

Spectacles are currently being resold for hundreds, and sometimes thousands of dollars on sites like eBay (admittedly, that's where we snagged ours) and Amazon, leaving the rest of us to wonder whether or not this approach errs more on the side of frustrating or brilliant. But if there's one thing we know, it's that the buzz -- both positive and negative -- around this launch has inevitably created an interesting sounding board for ideas and iterations.

Why Are Spectacles Such a Big Deal?

Between the unusual launch and the unique video perspective, it's easy to understand why Spectacles have the tech industry talking. But what does the introduction of a product like this mean for marketers? How might this launch shape the way brands approach their go-to-market strategies in the future? What impact will this have on the Snapchat app?

Let's walk through some of the biggest takeaways here.

A New Way to Watch and Record Video

Have you ever had a moment that you wished you had captured on video, but you didn’t have the time to grab your phone, open your camera up, and delete enough photos to make room for storage?

Spectacles allow for (almost) hands-free video recording, granting wearers the freedom to record from their point of view. This adds a new level of ease for the “videographer” to live stream an event, go behind-the-scenes, record a how-to video, or even interview someone. It also creates a new, interesting experience for the viewer: Imagine watching a video from the eyes of your favorite brand or personality.

Here are a couple of Snaps I recorded hands-free using Spectacles:

The camera utilizes circular video, which plays full screen on any device, in any orientation. And the lens is designed to capture the human perspective, offering a 115 degree field of view. This opens Snapchat to a variety of new video content: Previously, users had to record Snaps in vertical format, and the display wouldn’t auto-adjust if videos were recorded horizontally.

Here's a (very meta) video of me watching my Snapchat Story and experimenting with the circular video format -- recorded using Spectacles, of course:

I had fun experimenting with the Spectacles for this article, and I'm excited to keep using them to record unique video content. I especially love the battery-charging case that keeps the Spectacles safe and ready to record at a moment's notice.

If you’re a social media marketer, take note: Snap Inc. does a great job of turning its product into a viral social media moment. The secrecy and exclusivity involved in the rollout make Snapchat users excited and curious -- FOMO is real, people.

The larger lesson for marketers here? Use secrecy and exclusivity to generate buzz and make your audience more interested than ever in what you’re up to. For Snapchat Inc., that meant introducing wearable technology vending machines. For your company, that might mean serving up limited-time offers or creating an exclusive ambassador program.

It’s still too early to analyze how Spectacles will perform, but broadly, Spectacles could impact social media and video marketing in few big ways.

Consumers want more video content, especially on social media. Spectacles answered that call by creating a new video recording format that can only be viewed on Snapchat. Spectacles are effectively helping create more video content on Snapchat while increasing their user base’s engagement with their mobile app. (In 2016, four-year-old Snapchat overtook ten-year-old Twitter’s user base with 150 million daily active users.)

From a brand perspective, this could make Snapchat a more desirable channel for advertising, as shoppers are nearly twice as likely to purchase a product if they’ve seen a video first. (Think: Showcasing your product through the lens of an authentic, human perspective.)

Additionally, if you’re an event marketer, this new video format offers an interesting avenue for showcasing what it's like to actually be in attendance -- something that regular video content or photos can't capture.

We can’t tell you much more about data on the Spectacles ... yet. But we'll be sure to keep you in the loop with more circular videos on our Snapchat Story.

And while you wait in line to get your pair, be sure to check out our other Snapchat content, like this hidden features piece, this guide to Snapchat Stories, and this roundup of brands nailing their Snapchat strategies.

What’s your favorite feature of Snapchat? How will you use Spectacles in your Snapchat marketing strategy? Share with us in the comments below.