FINALLY. Following in Pinterest's footsteps, Twitter made an exciting announcement today: You can now share and view animated GIFs on Twitter.com and on Twitter's iOS and Android apps. (And HubSpot customers: Social Inbox supports it, too.) Before today, you had to upload GIFs via third-party apps -- but now you can upload and view them directly on Twitter.

The announcement was made in a tweet from Twitter's Support team -- and, appropriately, it included an animated GIF. (Click the image to animate it.)

Starting today, you can share and view animated GIFs on http://t.co/wJD8Fp317i, Android and iPhone. http://t.co/XBrAbOm4Ya

The GIF won't animate automatically in your News Feed, but all users have to do is click on the GIF for it to play right in the feed -- no new window has to be opened up. The white "play" button on the GIF indicates to users that it's animated, not just a still image. (As you can see in Twitter's example above, this means you should avoid a white background in your animated GIF.)

Why Marketers Should Care

You might be thinking to yourself, "Animated GIFs are cute, but they're kind of silly. How and why would I use them for marketing on Twitter?"

For many reasons, actually. Adding animated GIFs to tweets opens up a new world of content marketing opportunities on Twitter. Have you ever seen Home Depot's Vine profile? They've been posting short animated videos on their Vine account for some time now with promotions, quick tips, and other campaigns -- and people know them for it. I'm excited to see how they take advantage of Twitter's update.

So why can animated GIFs be good for marketing on Twitter?

They stand out in the Twitter feed. You may already know that adding still images to tweets catches your followers' eyes in busy News Feeds and makes them more clickworthy. A HubSpot A/B test found a 55% increase in leads when images were added to tweets. Animated GIFs kind of look like images on Twitter, except users can be prompted to click on them because of the white "play" button overlaying the image.

They're easily digestible. It's hard to capture people's attention nowadays, especially when they're scrolling through their Twitter feeds. Not only do users not have to open a new window to see the animation (this is huge), but also they're short in length, making them quick and easily consumable to your viewers.

They can elicit emotions. Have you ever watched a movie or television show and found yourself mimicking the facial expression of someone on-screen? This happens to me all the time. (Yeah, it's embarrassing.) Whether or not that exact phenomenon happens to you, you can imagine that seeing a video -- especially of a human face -- can make people empathize or feel some sort of emotion. Take a look at these two tweets and see which one elicits a more emotional response than the other.

Which tweet made you feel like my situation -- whatever situation that was -- was more dire? Probably the second. Animated GIFs help marketers make your viewers feel something. So think about how you can use popular GIFs or create one of your own to boost your Twitter presence.

Finally, a word of wisdom: When it comes to animated GIFs on Twitter, my advice would be to start slow, collect some data about your audience, and then increase the frequency of your tweets with animated GIFs over time if you find they're successful with your audience. Avoid over posting them on your brand's account, or you could lose some followers.

Tweeting a animated GIF involves the same steps as tweeting a picture. Here's how you do it:

Step 1: Compose a new tweet and put any text you want in there. 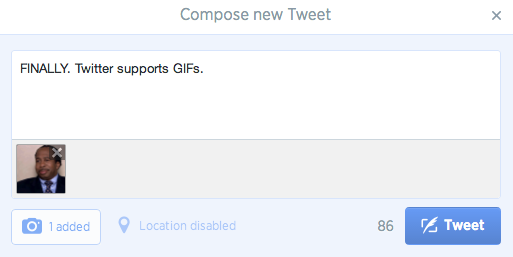 Wasn't that easy? Here's what it looks like. Remember, you just have to click the paused image to animate the GIF.

So, do all social networks support animated GIFs now? Nope, Facebook still doesn't -- they thought about it, but decided it would make the News Feed too chaotic. So if you're an animated GIF lover, you've got to hold tight on that platform.