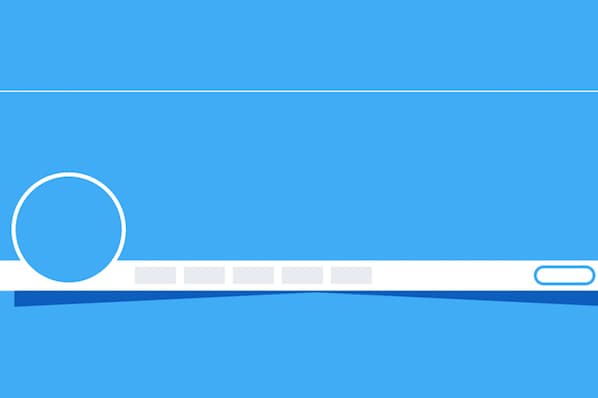 What do you think to yourself when you see someone's Twitter avatar is the default image of an egg? Chances are, you probably assume they are either inactive, a fake account, or someone not worth following.

While almost all businesses understand that the egghead approach isn't doing them any justice, they often fail to understand that a plain, flat Twitter cover photo can be equally as off-putting to potential followers.

Think about it: Would you rather engage with a company that has a header image featuring a dozen of their happiest employees working together on a cool project, or one that relies on a plain blue rectangle to do the talking?

Despite the prominent placement and size (the Twitter cover photo dimensions are 500 pixels tall by 1500 pixels wide), far too many companies are underusing this opportunity to express themselves. All they need is a little inspiration.

To give you a better sense of what a cover photo done right looks like, we've put together a list of 23 cool, funny, and cute Twitter header image examples from companies around the world. Check them out below.

Lyft's Twitter header image is designed to give you an emotional lift. The company has always been a positive face on the sharing economy, but now, it combines a creative use of the peace sign -- subbing in for the "y" in Lyft -- with an overall positive tone.

The company's header image also embraces simplicity, centralizing its text on a user's screen and ensuring consistency with its profile icon on the bottom-lefthand side.

Canva is an easy-to-use design app, and everything about their cover photo supports their brand. For one, their sub-brand, "Design School," is an inclusive campaign that encourages even non-designers to find their creative side -- thereby encouraging tentative customers to use their products. It's also fun, friendly, and colorful, all of which are characteristics consistent throughout their web presence.

Finally, and most importantly, it was probably made using Canva, which lets you create simple designs using images, text, and objects. Overall, very well done.

Target's creative cover photo is almost so mesmerizing that we don't want to look away. The red and white pattern, the man's white outfit, and the back wheel of the bike he's carrying all perfectly compliment the company's signature target logo. The image makes for a visually interesting look and feel. We're giving Target an A+ for coordination.

The collage SlideShare created for its header photo is an interesting way to show off what people can expect to see on the social presentation platform. While collage formats can sometimes appear cluttered, they managed to arrange this image strategically so it doesn't feel overwhelming. Not to mention, this approach doubles as a way for them to delight their users by highlighting real presentations for the whole Twittersphere to see.

British Airways' cover photo is perfectly simple. While the high-quality image of the plane dominates most of the space, our favorite part is the team of people on the ground, beneath the jet.

The company could have put the jet all by itself, but British Airways chose to keep the dozen neon-vested employees around it. This approach collectively reminds viewers how people-focused this airline is -- that the product is nothing without its employees. As a result, this cover photo tells a story that satisfies potential customers and potential job candidates alike.

Ahh, Taco Bell, the social media darling marketers can't help but love. They're rocking almost every social platform imaginable: Facebook, Twitter, Instagram, Pinterest, and even Snapchat. And while this Twitter header is fairly simple, we love that it's consistent with their other social media accounts, such as their Facebook cover photo below.

Plus, they always use fun, bright colors to create a unique, thematic experience across all of their accounts. This is a great trick for anyone looking to enhance their brand consistency.

Netflix's Twitter header image is a great example of a brand that knows how to capitalize on this prominently placed visual space. Here, they use the space to promote one of their latest original shows. And honestly, who doesn't love a good Netflix recommendation?

We also love how Netflix has localized its Twitter cover photos across its international accounts, dedicating each image to a different promotion that's relevant to the audience in that region. Check out the variations below from three different areas of the world:

When someone new arrives on your Twitter profile, something about your profile needs to compel them to stick around. If they can't easily figure out what your company does, you risk losing them pretty quickly. Why not tell them right in your cover photo? Animoto uses that precious real estate -- the very first place that draws the eye on your Twitter profile -- to nail its value proposition. While the business reiterates what it does in the Twitter description, putting it right out there in an attractive visual is a great way to communicate that value prop faster.

For those of us who don't have professional or stock photography at our disposal, here's a great example to inspire you. Basecamp, a project management software company, doesn't have a product that's easy to showcase through photos, either. Instead, the company uses a funny, captioned cartoon to portray what it does. The office supplies, written question, and of course the frantic employee in the center, all lead back to a single theme: the need for productivity.

This crisp image of an old tree, which Rio Tinto uses for its cover photo, above, catches your eye right away. And while it is impressive, what we're most interested in is the story it tells about the company. Rio Tinto is a pioneer of mining materials that, according to its Twitter bio, are "essential to human progress." The tree above could be considered a nice metaphor for how much success is rooted in the company's rich past.

If you're not already familiar with Etsy, it can be best described as a peer-to-peer ecommerce website for handmade and vintage goods. With that said, it's only right that the business would employ an artsy display of images to represent their do-it-yourself roots. But the juxtaposition of the left image and the one on the right is perhaps the best part: Etsy sells everything, from office supplies to beautiful flowers -- both of which are consistent in color with the Etsy brand.

Starbucks' Twitter header photo looks like a high-quality version of something you'd pull from a #Starbucks hashtag search on Instagram. For that reason, we're certain that this is something that will catch the eye of its loyal customers and resonate with them. No matter what your coffee is waking you up for, Starbucks should be seen as the comfortable pit stop during your day. This appetizing image will have any coffee lovers craving an ice-cold caffeine fix.

TOMS' entire business is based on the one-for-one business model that helps provide shoes, sight, water, safe birth, and bullying prevention services to people in need from all over the world. Its cover photo isn't laser-focused on these values, but it does showcase both the TOMS product -- the shoes themselves -- and the ordinary customers who make the TOMS cause possible.

It's hard not to smile at this adorable -- and real -- Twitter header from Danone. And with a hashtag on the bottom-righthand corner that reads "OnePlanetOneHealth," the image serves as the perfect compliment to the company vision. Between the proud mother on the right and her hungry daughter on the left, Danone celebrates the goofy, educational moments its yogurt is based on.

The Twitter header image of UNICEF, one of the world's biggest not-for-profits, isn't just consistent in color -- it's consistent in vision. When your business is dedicated to serving the underserved, the best thing you can do for your audience is put whom your fighting for front and center. As marketers, we talk a lot about calls to action (CTAs). The image above is the ultimate CTA, and it doesn't even need a landing page to capture your attention.

Known for their tomfoolery, Old Spice's Twitter cover photo is a great visualization of their quirky, charismatic approach to marketing. Between helicopters spouting laser beams to flaming lion and bear heads, this header image is both inventive and humorous, traits consistent with their brand.

Petzl is a developer of headlamps for all sorts of dimly lit outdoor activities. What we love about the company's cover photo, above, is that it works whether or not you know what the business does.

If you know about Petzl's product, the two lights on the far lefthand side of the image demonstrate just how powerful these headlamps are. If you don't know about Petzl's product, the image above makes you want to find out more. Either way, this cover photo tells a story about its customers, and the amazing adventures they might take Petzl on with them.

It's uncommon (and not often recommended) for businesses to feature their products in their social media cover photos. Garmin is a glaring exception. This GPS watch-maker takes advantage of its circular profile picture to promote its similarly shaped time-tellers in a truly natural way. All the while, its background image clarifies just who these advanced watches are made for, putting the company's core customer (an outdoors-person) in the exact center of the image. This artwork is unbelievably well-balanced from left to right.

Live Nation isn't just passionate about music -- it's passionate about the visual experience music can deliver. What better than to feature KISS, one of the most experience-focused bands in history, as the company's header image? Not only is this artwork consistent in color, but it is true to the business's commitment to an amazing live experience. This is why the header image of a company like Spotify, another music-related brand, might be more focused on the audio, while Live Nation is focused on the artists behind the sound.

Chloé is an upscale fashion brand from France, and its Twitter header image truly lets the clothes do the talking. With a light, understated profile picture to the lefthand side, the superbly dressed models in the cover photo are what draws your gaze. In addition, all of these women are walking leftward toward the profile picture, subtly driving your attention back to the brand name that makes it all possible.

Your Twitter header photo is a valuable piece of real estate -- and it's a great space for promoting various marketing campaigns associated with your business. Vodafone reiterates its logo in the cover photo, but just differently enough to draw interest and drive engagement with the clever written copy inside the logo. The image also maintains a consistent color scheme, especially with the reds and whites of its logo.

We've written about Maersk Line's Twitter presence before. We especially admire how its social media team has found a way to find the beauty in a stereotypically "boring" industry -- container shipping -- through brilliant photography. The company's cover photo, which shines light onto an abstract, seemingly remote landscape, is a perfect example of the gorgeous imagery found throughout their Twitter page. It also casually reinforces its commitment to the industry: No matter how distant or unexpected the destination is, Maersk is en route.

Colleges, even specialized ones, can be hard-pressed to show the essence of who they are in a single image -- much less in the few seconds they have to capture a person's attention on social media. The American College of Sports Medicine defies the odds with this simple, brand-aligned cover photo, above. Sneakers, water, and weights -- you don't need any other information to know what this institution is all about: sports.