Every time you post a new tweet, it has only minutes in the spotlight before getting drowned out by newer tweets. In fact, every second, 9,100 new tweets are posted by Twitter users around the globe.

Until last week, there's never really been an easy way of finding those great tweets. But now we have Twitter's brand new feature called "Moments" to make news updates and other quality content more easily findable, browseable, and shareable. Twitter calls it "the best of what's happening on Twitter in an instant."

You can find Moments in a new tab next to the Notifications and Messages tabs. It's marked by a lightning bolt icon.

Here it is on the web: 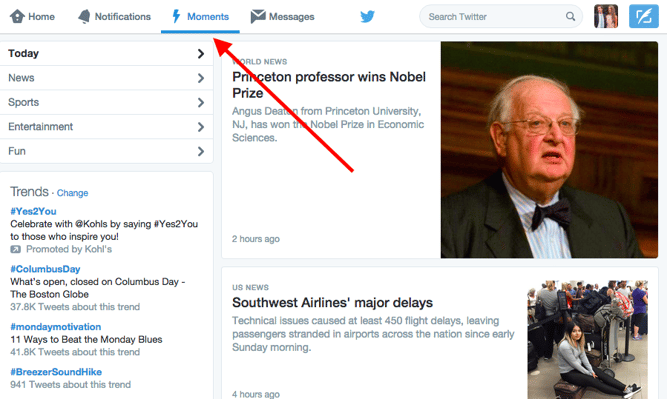 And here it is on mobile: 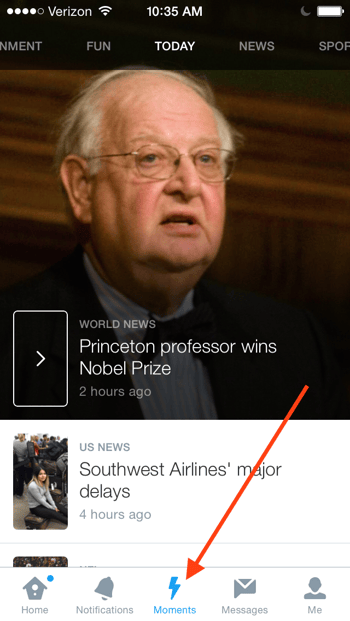 So what's the deal with Twitter Moments, anyway? What is it, whom was it made for, and how do you use it? Let's dig in.

Twitter Moments is a new feature (announced on October 6, 2015) that helps users quickly find some of the trending tweets and stories of the moment.

These "best tweets" are called Moments, and they're a collection of tweets curated by a small editorial team at Twitter, covering local and global news stories, sports updates, and entertainment news, as well as "fun" content like this curation of tweets featuring pictures of fall foliage. In fact, Moments are divided into those four categories: News, Sports, Entertainment, and Fun.

Again, all of these Moments are tweets, not articles. In fact, many tweets within Moments don't even include links to articles. Here's what a Moment about the Princeton professor who won a Nobel Prize looks like, for example:

Most Moments are handpicked, organized, and updated throughout the day by a small editorial team led by Andrew Fitzgerald, a former Al Jazeera and current TV journalist. Using real-time data, Fitzgerald's team can see which tweets are going viral -- and from there, find the best and most representative tweets of a given story. According to The Verge, the team tends to choose tweets that come directly from the source: "People who are on the scene, or are directly involved in the news story."

Some Moments are contributed by Twitter partners like Bleacher Report, Mashable, The New York Times, and Washington Post. The posts contributed by partners are marked clearly, as you can see below. 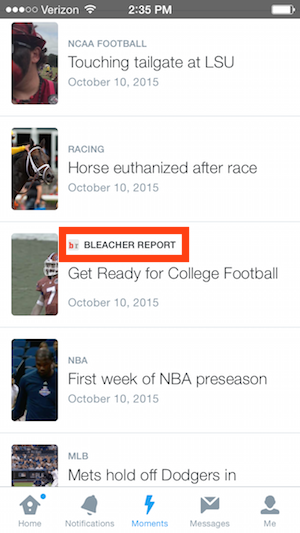 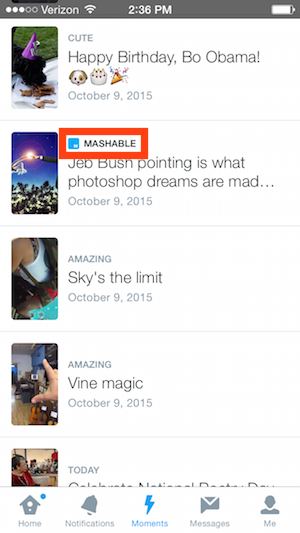 For now, access to the entire Moments tab is only available to users in the U.S., but those outside the U.S. can view direct links to individual Moments. The folks at Twitter are working on rolling Moments out to people in other countries over the next few weeks.

Whom Was It Made For?

Since the content for Moments is handpicked by the small editorial team and isn't personalized to your individual interests, it's especially helpful for Twitter newbies, casual users, and the less tech-savvy folks among us. It works even if you don't follow a single person on Twitter or have never tweeted yourself.

"We’re looking for people who have either tried and kind of given up, or people who use it and know there’s good content there but for one reason or another they haven’t really gotten the experience that we all get out of it here," says Madhu Muthukumar, the product manager for Moments.

The goal? To eliminate the extra steps that some users might have trouble with, like trying to figure out what to search for and how to find it. Moments does that work for us by surfacing popular and newsworthy content, says Muthukumar.

How to Browse Moments

To browse Moments, you'll first need to go to the Moments home screen. Get there by clicking or tapping on the "Moments" tab, marked by a lightning bolt on both the Twitter website and the iOS and Android apps.

The home screen is called "Today," and it features a collection of the day's top stories across all four categories: News, Entertainment, Sports, and Fun. If you're looking for stories in a particular category, all you need to do is click into the category to find more relevant stories. 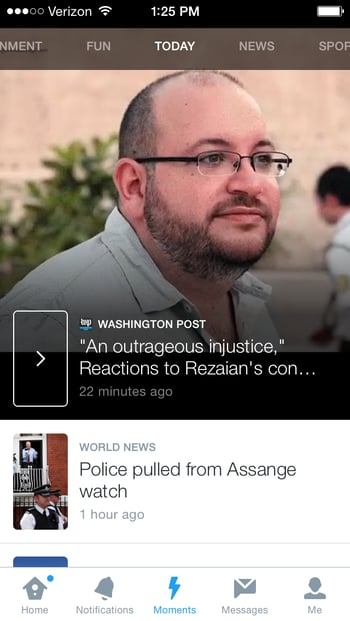 Find a story that interests you? Great! Click on it to see the Moment. Each Moment features ten or so tweets handpicked by Twitter's editorial team. These tweets are mostly a mix of plain text, photos, and videos, with only a smattering of tweets that link to full articles.

Want to share the whole Moment with others? You can share the link to the Moment or get the embed code for the Moment by clicking the ellipsis icon, which is located on the top right-hand corner on the web or at the bottom-right corner on mobile. (You can embed a Moment on your website or blog the same way you would embed a tweet. Learn how to do that here.)

Want to share an individual tweet you see in the Moment? You can take any action you could for a normal tweet, like "favoriting" it, retweeting it, following the person's profile, and so on. 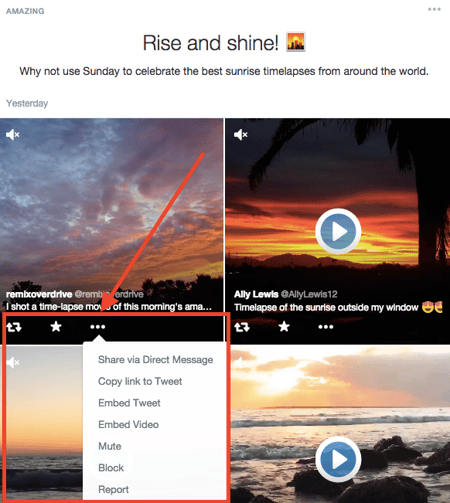 The Moments editorial staff updates Moments as new information is added or more great tweets on the subject are published.

You'll know new content has been added to a Moment since you last viewed that Moment if you see a blue dot appear in the top right-hand corner of the Moment's featured image.

Twitter gives you the option of following a Moment for the stories that update frequently, like a live football match or the Oscars. If you see that option and click "Follow," any tweets added to the Moment will appear in your Twitter timeline in real time.

Unfortunately, because Twitter's editorial team controls all the content on Moments right now, there's not a whole lot marketers and publishers can do to get their content on Moments. They aren't taking pitches from anyone else at the moment.

One way of getting around that barrier? Write guest articles for one of Moments' partners, and then request they pitch your piece to Moments. Keep in mind the topics Moments features are mostly current events and other popular, newsworthy topics.

Moments' partners include Bleacher Report, BuzzFeed, Entertainment Weekly, Fox News, Mashable, New York Times, Vogue, and Washington Post -- and Twitter plans to expand that program in the future. To get you started, here's a list of guest blogging guidelines for top media outlets, including Mashable and New York Times.

Right now, the team of people choosing and writing short descriptions for each and every moment is quite small. The company says it has plans to expand that team in the future, especially as it makes the Moments feature available in other countries and languages.

But it's likely that, at some point, this will have to scale to a point where Moments can't always be handpicked. What then?

To prepare for that possibility, marketers should pay close attention to the types of tweets getting featured in Moments. It's a vastly visual platform, and the majority of tweets include photos and videos -- especially Vines. (Don't underestimate Vines -- here's a simple guide for how to use Vine in your marketing.)

When it comes to Moments that cover specific events, it seems as though Moments' editorial team might be finding a lot that content through an event's official hashtag, like #corgicon below.

We have yet to see Periscope videos included in Moments, but that could be only a matter of time. (Here's an introduction to Periscope for those of you who are new to the platform.)

The folks at Inside Pitch PR predict users will eventually be able to create a personal Moments section to tell their own stories to their followers. A move like this would mean brands could curate their own Moments to showcase a news story about them, tweets about an event they're hosting or sponsoring, or what a day in the life at the office looks like.

Does Twitter advertising have a place in all this? Fitzgerald says they're "still working on the revenue piece for Moments." But sponsored tweets could easily have a place in Moments' future as a way for Twitter to generate more revenue. For marketers, it might be worth trying to experiment with Twitter advertising now -- that way, if the possibility of sponsored posts for Moments rolls out, you know what content you should promote to generate better ROI.

Though Moments doesn't immediately add ton of items to your to-do list, it hits at the future of Twitter -- one with a focus on wrangling the social network's firehose of content.

What do you think of Twitter Moments? How do you think marketers should be thinking about it? Share with us in the comments below.