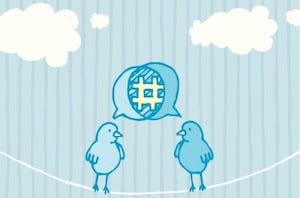 One of the cool things about working at a popular tech blog like Mashable is that you're really in-the-know about industry news. 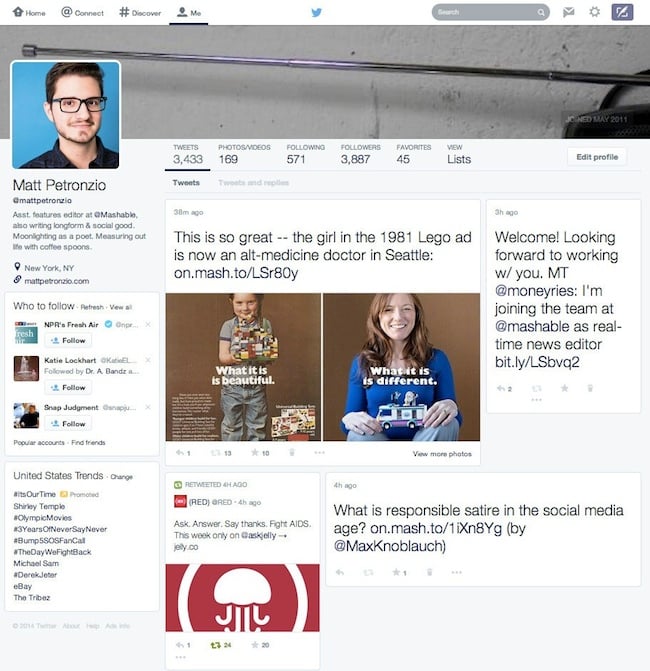 As Mashable pointed out ... it looks a lot like a Facebook profile, doesn't it? With that left-aligned headshot and bio?

But also ... it kind of looks like Google+, too. And as this Pinnatic knows (that's a portmanteau for Pinterest + Fanatic) it kinda looks like your feed when scrolling through new pins.

First of all, there's probably nothing different for you. This hasn't rolled out to everyone yet, and there isn't even an official statement from Twitter about this new design. This is probably just one iteration Twitter is testing before it rolls out a larger redesign.

But in terms of what this redesign changes -- well, not much. All the same information you could always get from your Twitter account is available, just shuffled around a bit. Arguably, in a more user-friendly way (I'll let the UX experts speak to that).

Possibly no one. But I care because I've noticed something over the past couple years:

One of my jobs is to stay on top of social networks' various platform updates. And the trend I've been seeing is a progressive mashing together of features and layouts such that they all look more and more like each other.

Whatever happened to differentiation? It seems like the go-to-market move for social networks is disruption, but they stay alive through feature homogenization and monetization through ad spend. From a business' perspective -- the people who are going to spend the money on these things -- it's getting harder to tell what the unique value for each network is. Why choose, say, Twitter over Facebook? Or vice versa, for that matter?

The closer these networks get to each other on features, layout, and audience size, the harder it'll become to establish that competitive differentiation to their target customers -- the businesses they want to hang out (and spend money) there.

Editor's Note: More people have been seeing the new layout appear in their Twitter accounts, and it looks like the recommended header photo size is now 1500 x 500 pixels, instead of 1252 x 626 pixels in the current design. It might be wise to get your new image ready for when the new layout appears for your own account!