To actually grow your business with Twitter, it's not enough to merely tweet for the sake of tweeting -- you've also got to measure your efforts, and analyze them to see your performance. 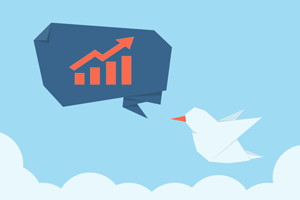 While the latter may not seem like the fun part, it's actually where all the magic happens. By figuring out what's working (and what isn't), you make more informed strategic decisions -- and hopefully work your way to be more successful down the road.

This post is all about what that magic can tell you. Below are five takeaways I've found from analyzing HubSpot's Twitter account. Try out some of these strategies on your company’s Twitter account, and run your own analyses to see if they work for you, too.

(Tip: If you want establish some benchmarks for your Twitter presence and get some ideas for what types of things to test out, check out Retweet Lab.)

Every month, I export Twitter data on date and time tweeted, tweet copy, link included, and the number of clicks/retweets associated with that tweet into Excel. In Excel, I calculate the average monthly clicks and retweets per tweet to use as a baseline comparison. I then run several filters through the Excel data. With the filter feature, I am able to group tweets by content type or by certain aspects of tweet copy. I compare groupings to each other and to the monthly average.

Below are the most important takeaways I've found from these analyses.

If it makes sense for your account to tweet about social media -- do it. People who will be reading these tweets are already interested in social media because they're using social media to find this information.

For @HubSpot, when we tweeted blog posts or offers about Twitter and other social media topics, those tweets received, on average, 22.5% more clicks than the average clicks for a tweet in the month of May.

2) Use both "title tweets" and "copy tweets." [Tweet this takeaway.]

"Title tweets" start each word with a capital letter -- just like a headline. They are tweets with just the title of a blog post or article and the link to that article. There are no extra words. However, a "copy tweet" presents the article or blog post as a sentence or question.

There is the belief that tweeting titles of blog posts or articles is a huge Twitter no-no. As long as your titles don’t put people to sleep, I found this belief to be false. Mixing up title tweets and copy tweets gives your Twitter timeline variety.

3) Tweeting a statistic is great for reach, but not clicks. [Tweet this takeaway.]

4) Be very clear about what you're offering. [Tweet this takeaway.]

As I mentioned in another blog post on the psychology of Twitter engagement, people are extrinsically motivated to click on tweets that offer something of value for them. It is important to make it clear what you are offering. People want to know exactly what they will receive once they click on that link.

Example of a clear offer:

Example of an ambiguous offer:

On @HubSpot, I found that the clearly stated offers received 18% more clicks and 29.8% more retweets than the tweets with a more ambiguous copy.

Tweets have fairly short lifespans, so don't feel guilty for reposting a tweet. Chances are, not all of your followers got to see it the first time around, anyway.

On @HubSpot, these two tweets are exactly the same, and received almost the same amount of clicks (140 clicks vs. 132 clicks).

So figure out how you can recycle your tweets in a non-spammy way -- it could pay off.