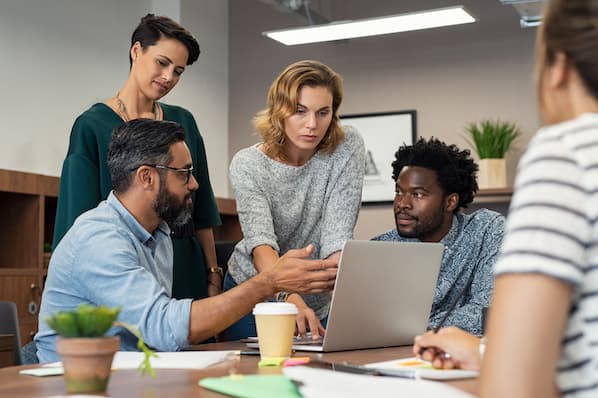 Closing deals involving complex price modeling, a need for extensive product knowledge, varying potential discounts, or any other atypical standards and practices isn't exactly intuitive. It might require some insight, expertise, and materials beyond a conventional sales org's reach.

In those cases, it can help to have something called a deal desk in place — a resource that can smooth out the harsher, more convoluted sides of highly complex deals.

Here, we'll get a better understanding of what a deal desk is, an overview of how to put one together, and a picture of some of the metrics to measure one's efficacy.

What is a deal desk?

A deal desk is essentially a centralized location to consolidate information and representation from multiple departments — specifically, ones with a significant stake in facilitating high-value, complex deals. It might involve any team that can help conduct that process, including legal, sales, product, and finance.

A deal desk is essentially a sales-supporting brain trust. It's a forum where multiple departments within an organization can contribute their expertise and perspective to help close highly complex deals that might be beyond most sales reps' skills and know-how.

Aspects of the deals most commonly passed off to deal desks can include components like atypical contracts, the need for extensive product knowledge, and intricate pricing structures. A deal desk provides a way for a salesperson to reference the information, resources, and advice they might need to cover those bases.

For instance, say you — a salesperson — are on the brink of closing a massive, high-value deal with a SaaS giant. The deal itself is for a new, complex product as it's being released. You've discussed offering a sizable discount to this company in the hopes that its support will boost your new product's prestige.

With a well-constructed deal desk, you could have a readily accessible location for documentation and insight that can inform how you negotiate the deal, the proper price modeling you should use, what kind of discounts would be appropriate to offer, the degree of product knowledge you can bring to the deal, and the how you need to approach the deal from a legal perspective.

Putting a Deal Desk Together

What do you want your deal desk to do?

What do you need your deal desk for? In some cases, a deal desk is solely a resource for reviewing factors like pricing and deal structure, but many desks extend beyond that.

As I touched on earlier, a deal desk might have a role in other aspects of the deal-closing process, including providing advice on negotiation strategy and insight about product knowledge. So if you want to put a solid, productive deal desk together, you need to establish exactly what you want from it.

Who do you want to involve?

A deal desk can incorporate input, expertise, and materials from a variety of sources. Again, you might include stakeholders from departments like sales, legal, product, and finance.

Anyone who can smooth out and expedite the deal-closing process can have a presence in a deal desk. If you're putting one of your own together, you need to tap the right, relevant people to carry out the responsibilities you defined in the previous step.

Which deals will it cover?

This point is central to ironing out a deal desk's purpose. You need to have a firm picture of what kinds of deals you want your desk to cover. How big, complex, or important does a deal need to be to warrant attention and effort from the team?

You also have to pin down where in the sales cycle where you see it fit to involve your deal desk. Understanding the point in the buyer's journey where your deal desk should come into play will help you get the most out of that team without exhausting too many of the resources it takes to maintain it.

This is one of the more straightforward metrics you can use to measure the efficacy of your deal desk and the value of the deals it touches. Profit can tell you whether the data and insight from the stakeholders at your deal desk are actually paying off.

If the highly complex deals your deal desk informs aren't as profitable as you'd like them to be, you might want to reevaluate the strategies and materials that come from it.

At its core, a deal desk is a resource to support the process of moving highly complex deals through a pipeline. Its primary purpose is ensuring that as many of those deals are closed as possible.

That's why win rate — the percentage of closed deals that involved contributions from the deal desk divided by the total number of deals the desk was involved with — is such a relevant, important metric when gauging a deal desk's efficacy. It's the purest measure of how efficiently and effectively a deal desk operates.

Typically, the kinds of deals you tap a deal desk for are larger than most. So, naturally, it helps to understand the average size of those deals when trying to gauge the efficacy of and need for your deal desk.

If you're noticing the deals you close with the help of your desk aren't as significant as you think they should be, you might need to adjust how the various stakeholders involved are communicating with your sales team.

You might also need to determine whether the desk's materials are thorough and up-to-date enough to help your closers get larger deals through the pipeline.

A well-constructed, active deal desk can be a major asset to your sales org. Having that kind of resource — one that incorporates the know-how and skills of a variety of stakeholders — can help push highly complex deals through your pipeline more consistently and efficiently.

If you're interested in incorporating one into your org's broader sales efforts, be sure to pin down its ultimate purpose, who should be involved, what kind of deals it will address, and the most relevant KPIs to tell you if it's doing its job.

Use These Sales Manager Resume Tips & Templates to Get the Job