How Vulnerability in Sales Can Help You Close More Deals, From a Sales Training Expert

I've made this comparison to sales skills before, but for me, it always rings true. Salespeople, just like Liam Neeson in "Taken," need a particular set of skills to be successful. 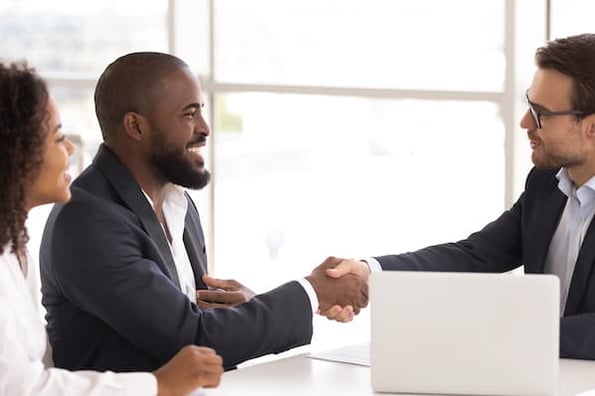 One of those skills is vulnerability.

After researching how vulnerability can impact sales, I decided to talk to CeCe Aparo, Vice President and GM of Corporate Training at Hoffman, a sales management training organization.

Aparo has a unique perspective on the importance of vulnerability in sales because she spends half her time selling and half her time training clients.

In fact, in her own words, "Everything we teach at Hoffman, we do ourselves."

In this post, we'll discuss Aparo's point of view on the importance of vulnerability in sales and how to be vulnerable as both a sales rep and manager.

The Importance of Vulnerability in Sales

In sales, it's important to take stock of and innovate your sales techniques when the opportunities arise.

Aparo says, "One thing that's changing in sales is vulnerability. We're humans selling to humans. A part of being human is being vulnerable."

So, what does it mean to be vulnerable in sales?

It means that you have the confidence to recognize that something is scary, but do it anyway.

"It's the moment you decide to go all-in," Aparo adds.

To be vulnerable on a sales call, you need to show up authentically in your actions, whether you're on a cold call, running a sales meeting, or conducting a training session for your reps.

Whatever you're doing, to be vulnerable means you show up authentically and are genuine and honest in your approach.

However, you might be wondering, "Why would I want to be vulnerable in a sales meeting?"

According to Aparo, "If you're vulnerable, inevitably you're going to try something new. It allows reps to close bigger deals and advance deals in ways they never thought possible."

Additionally, being vulnerable will give you more opportunities to ask for the things that you want.

On the management side, it's important to be vulnerable in front of your team so you allow them to try something new.

"Managers need to live and breathe vulnerability, or your reps will call you on it," Aparo says. "Jeff Hoffman has a great line -- ‘Demonstrate the behavior you wish to inspire.'"

One way to demonstrate and coach vulnerability at the same time is to do round-robin cold calling. For this activity, you can pull your reps in a conference room and conduct cold calls together -- including you, the manager.

While this might feel scary, it can help your team bond because you'll all know you're going to mess up, but you can have a good laugh and practice being vulnerable together.

After all, the best teacher of sales skills is experience. That's why coaching vulnerability is all about letting your team practice and talking about the anxiety you might be feeling.

"It would be weird to talk about vulnerability without talking about some of the anxieties. Anxieties about numbers to hit, opportunities, deals, etc. We're dealing with humans, which means there comes an unknown element we can't control. But we can control, in those moments, where we decide to show up and be vulnerable," Aparo remarks.

Aparo added that vulnerability ultimately starts with the diversity and culture of your team.

With a diverse team, your employees will be able to learn more from each other because of the range of experiences, skills, and even vernacular.

Now that we've discussed what it means to be vulnerable and why it's important, let's dive into the nitty-gritty of how.

How to Be Vulnerable in Sales

In the sales industry, it's known that cold calling is a great way to engage with a potential prospect. However, it's also one of the most vulnerable things a sales rep can do.

Picking up the phone as often as possible is one way to display vulnerability through your actions.

Aparo says that scripting someone is the worst thing you can do. "When I coach vulnerability, it's less about what you say, and more about your actions," she explains.

Again, being vulnerable means that you understand that cold calling is scary, but you do it anyway.

While you shouldn't script yourself, an example of expressing vulnerability on a cold call might be saying something like "Hi -- we've never met … "

With this statement, you're addressing the vulnerability of cold calling.

2. Communicate how you're feeling.

Right now, you're probably thinking, "How can I communicate how I'm feeling without losing credibility?"

The answer is vulnerability.

When you communicate how you're feeling, you don't have to show your hand. All you have to do is name the emotion you're feeling, whether that's nervousness or excitement.

"You can say something like ‘I want to do something a little different today' or maybe something like ‘I'm more nervous than I thought I was going to be,'" Aparo notes. "Naming the emotion or the inherent challenge of that moment gives you an opportunity to be vulnerable."

At the end of the day, authentically naming your emotions helps you relate to your prospect as a human being. Again, we're humans dealing with other humans.

Do you remember being a student? It was a great time because you were able to ask questions and request clarification when you didn't understand something.

On your sales calls, you shouldn't show up as a salesperson, but actually as a student.

Buyers appreciate it when you ask questions.

"We're so focused on building rapport or being the most knowledgeable or credible, when in fact, the only thing you can really be an expert on is your own product," Aparo says.

You don't need to understand your buyer's industry better than them. The vulnerable thing to do is to let them educate you.

Additionally, being a student means showing up prepared to ask the right questions. Being a student doesn't mean that you won't come across credible.

"It's the level of sophistication of your questions. That's how you come across as prepared, but still vulnerable," Aparo adds.

Sophisticated questions show that you did your research and aren't trying to show off how smart you are.

"Focus less on credibility and more on the sophistication of your questions," Aparo mentions.

4. Close for what you want.

Aparo's example of this was a recent sales call she was on with four senior leaders, seasoned in their career.

While they were on a video conference call, she was the only one on video.

She had to ask for what she wanted, ask them to turn on their cameras, and wait in the silence while they decided whether or not they would do it.

"The vulnerability came in two moments -- when I asked the question and the silence after," Aparo says.

But it paid off. They turned on their cameras.

After she did that, Aparo said she had more power and authority and changed the social paradigm.

A part of being vulnerable is asking people to do things you want.

As Aparo notes, "We have preconceived notions about how a sales conversation is going to go."

However, one thing you can do to be vulnerable is to change your narrative.

As a sales rep, you might be used to people saying no.

"When you hear a no, it's not because they hate you. There are a million other reasons that have no bearing on who you are as an individual," Aparo adds. "Instead, expect that they're going to love you and be excited to talk to you. That will give you the confidence to go all-in."

Being vulnerable in sales can be difficult, but it's an important skill to get what you want. It can help you build more authentic relationships with prospects and even close more deals.