What is a Hamburger Button — and How Does it Work?

It may sound tasty, but a hamburger button doesn't contain anything worth eating. Instead, this three-line symbol holds menu options to help make website layouts cleaner and easier to navigate while taking up less page space on its own.

Now a familiar feature on websites worldwide, there's an ongoing debate about the benefits and potential drawbacks of this burger-like button in website design.

So, in this guide, we'll dive into the details and put the burger button under the grill: What is a hamburger button, exactly? What should it be used for? Why bother with this button style, and how do you make one in CSS? Let's dig in.

What is a hamburger button?

A hamburger button, named for its visual resemblance to the food item, is a type of button common on websites and applications, especially mobile environments. It is an icon that consists of three parallel horizontal lines, often rounded at the ends. 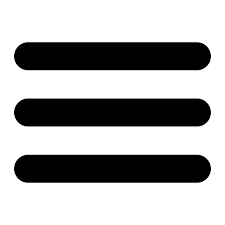 Hamburger buttons are usually placed in the top corner of the user interface. When pressed, the button reveals a previously hidden menu (also called a “hamburger menu). This menu may “drop down” from the location of the button, appear as a modal, or slide in from the top, side, or bottom of the screen.

The main purpose of the hamburger button is to preserve screen space by hiding navigational elements. The icon itself is small and implies a hidden list that can be revealed with a click or press.

The burger button got its start in 1981 when designer Norm Cox did some work for the Xerox personal workstation. He tried other iterations — including a downward-pointing arrow, asterisk, and plus symbol — but none offered the same ease-of-use as this simple hamburger helper.

Users quickly got the concept: Click on the button to get a drop-down menu of navigation or feature links. Beyond its initial run at Xerox, however, designers didn't really bother with the burger — until Twitter started using it in 2008. It showed up in iOS a year later and today it's a staple of web design, often appearing in the top-left or the top-right corner of webpages and providing an easy place to store larger menus.

Not everyone is sold on the role of hamburger buttons on websites. Detractors say this bun is overdone, sighting concerns such as:

But there are also benefits to deploying bun-based menus on your site, including:

Hamburger buttons are all over the web — here are a few examples to demonstrate how they might look.

Hamburger Button in an Android App

Let’s start with a standard example of an in-app hamburger menu. The Gmail app home screen looks like this — notice the hamburger button at the top left. 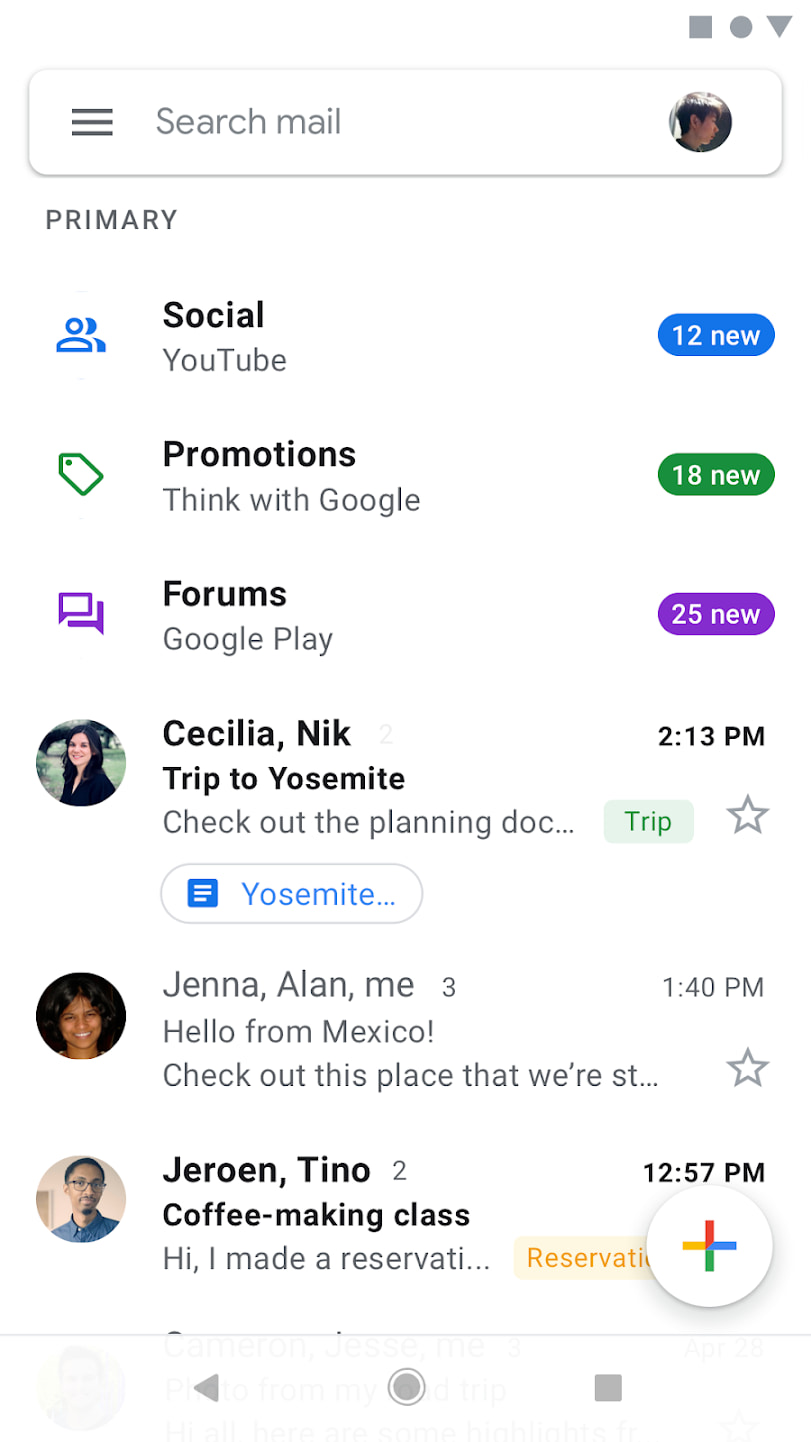 When you tap the icon, a menu slides in from the left side. 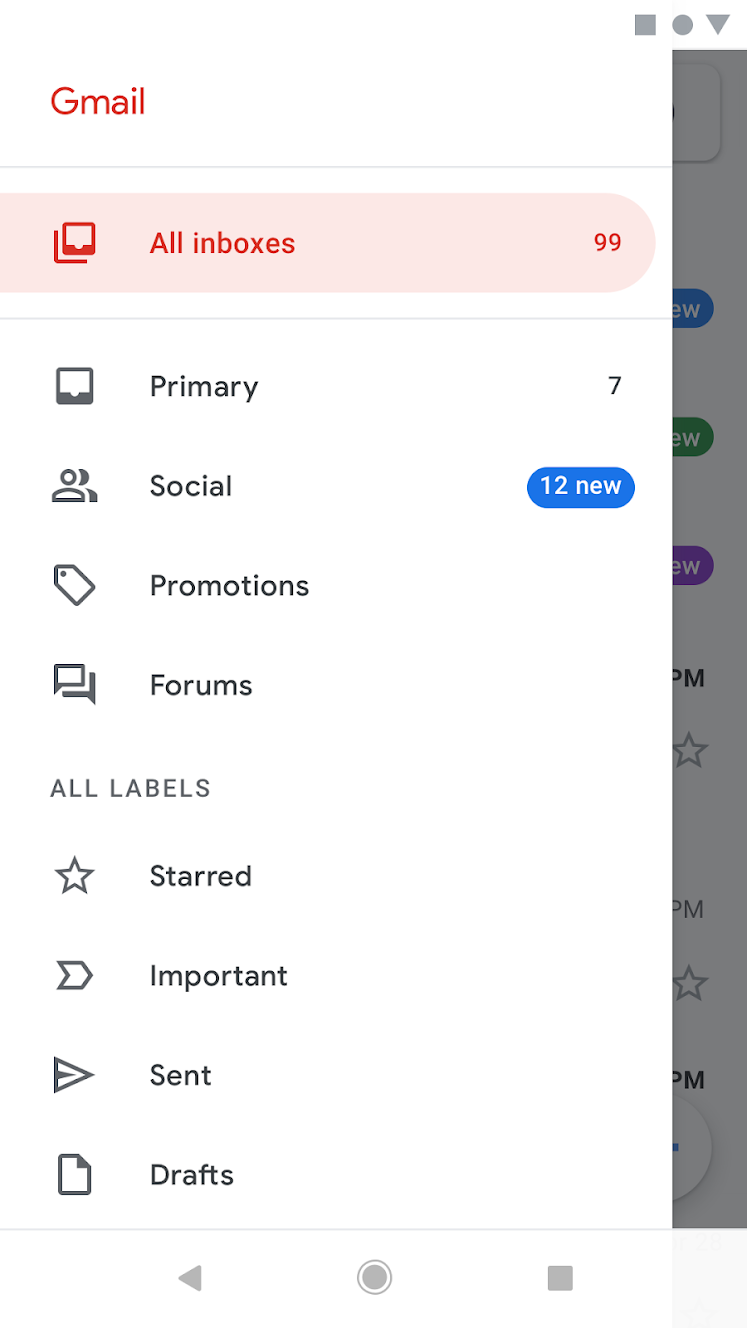 Next, food brand Pipsnacks makes creative use of a hamburger menu on its mobile website. On page load, the button displays in the top left corner of the screen. 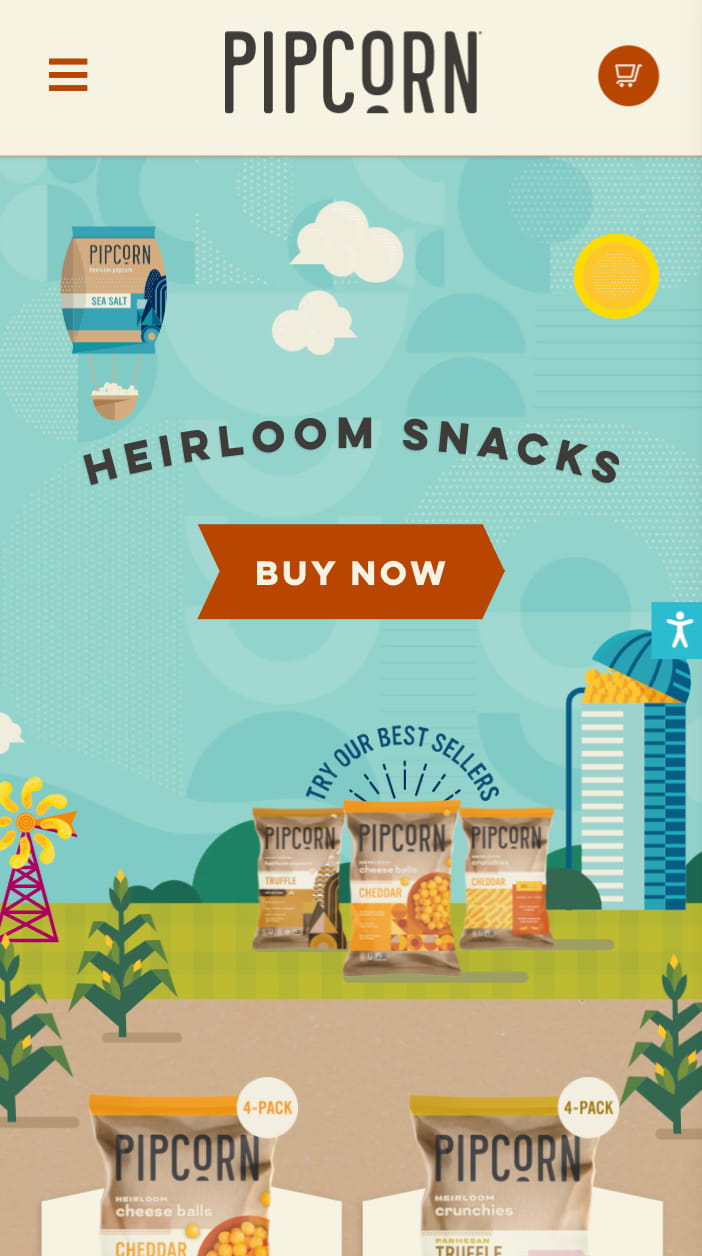 Tapping the icon reveals a navigation menu that appears to fold out from the top of the screen. It’s a fun, clever effect that adds to the site’s artisan feel and immerses mobile users in the experience. 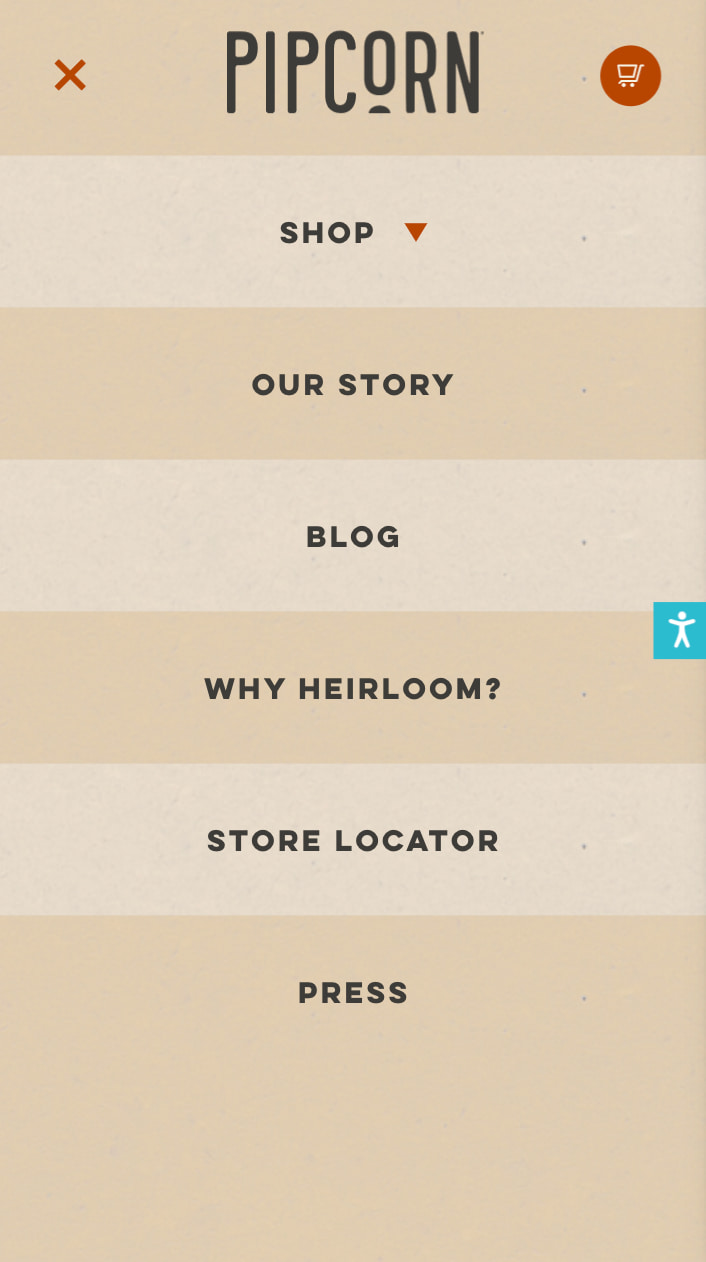 There are also numerous creative iterations of hamburger buttons you can find online if you want to add a pinch of extra detail. Here’s one excellent animated button icon from CodePen user Danilo — try clicking the icon in the example below and seeing what happens.

See the Pen Animated menu by Danilo (@Danilo06) on CodePen.

How to Make a Hamburger Button With CSS

Thankfully, creating a hamburger button in CSS isn't terribly complicated. If you'd prefer to create CSS code in a standalone editor, try options like RapidCSS or Stylizer. RapidCSS is quick, lightweight and well-suited to users with some CSS experience. Stylizer offers a more GUI format and comes with immediate preview options to ensure the code you write delivers the results you want.

If you'd rather code in-platform, one of the simplest options is WordPress. First, log into your account, find "Appearance" on the left-hand sidebar and then click "Customize".

Head to the bottom of the new left-hand side menu and select "Additional CSS". 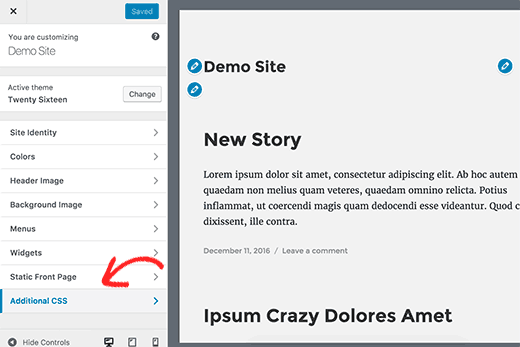 Finally, you'll see a CSS editor page that lets you enter and test CSS code before pushing it to your site. 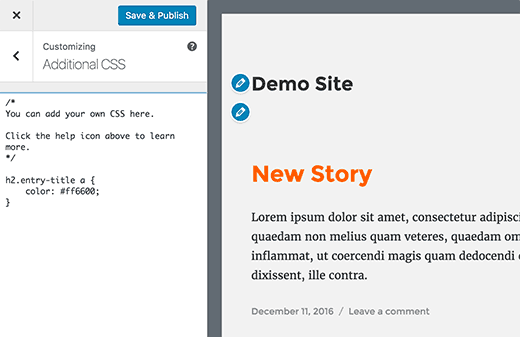 Now it's time to build that burger. Let's say you want to build a static icon. The best place to start is with HTML:

This code provides the basis for your hamburger button.

Next, add your CSS:

The result is a standard, static hamburger button that leads to a menu once clicked. 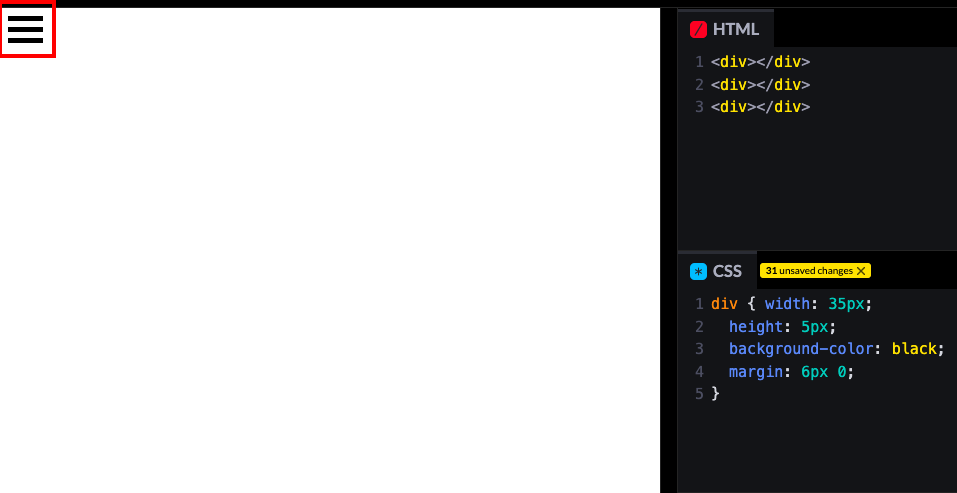 Cooking Up a Dynamic Hamburger Button Icon with CSS

If you'd like to try your hand at something a little more complicated, consider an animated menu button that converts into a "cancel" icon when clicked. Here's how it starts:

Click to open the menu, and it turns into this:

The benefit here? Users not only get access to your burger-based menu, but understand how to make it disappear using the universal "X" for cancel.

To cook up this dynamic option, start with your HTML. Note the class attributes that we are targeting within each div element. This will help style each line in the hamburger menu as it transition through the animation:

Now, add your CSS. For this example, there are classes that target both before and after the change for each element:

Finally, toss in some JavaScript to make the action execute upon a click:

Building a Burger Button Without Code

Of course, not everyone wants to spend time and effort creating a hamburger button that may or may not get clicked by users. Some website owners simply aren't comfortable with CSS and HTML coding, while others prefer to prioritize content creation or main page layouts. 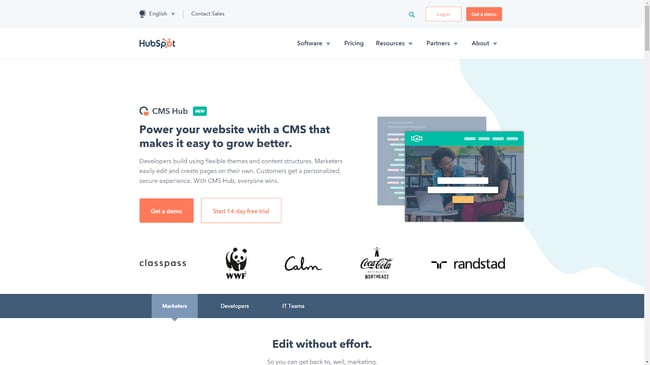 With CMS Hub, you can build a great website that suits your needs and captures your target market. Make sure everything is working as intended with traffic monitoring and marketing campaign integration. Hamburger buttons come standard. 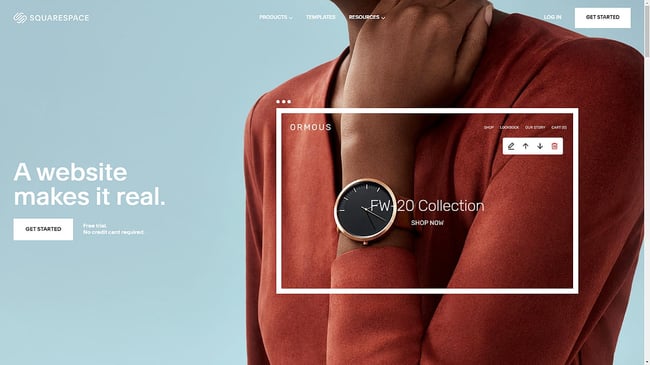 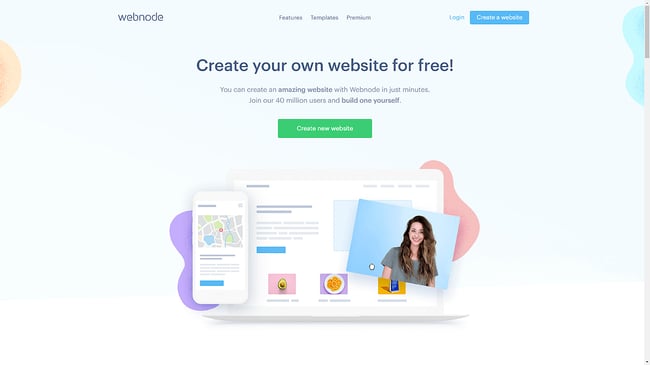 40 million users have built sites with Webnode — add or change content with just a few clicks, and quickly customize the placement and drop-down options of any hamburger menus. 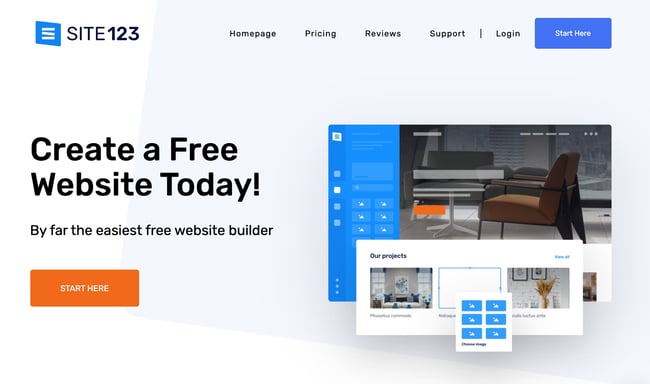 Simple is the name of the game for this website builder. Site123 isn't fancy — it's free and makes it easy to integrate hamburger menus into your web design.

Not everyone loves the hamburger button.

It makes sense; the menu can cause confusion or put critical navigation options just out of reach. But there are burger benefits: Building your own button or using a website builder tool lets you decide where this menu makes the most impact and gives you total control over navigation on your site.