How to Set Opacity of Images, Text & More in CSS 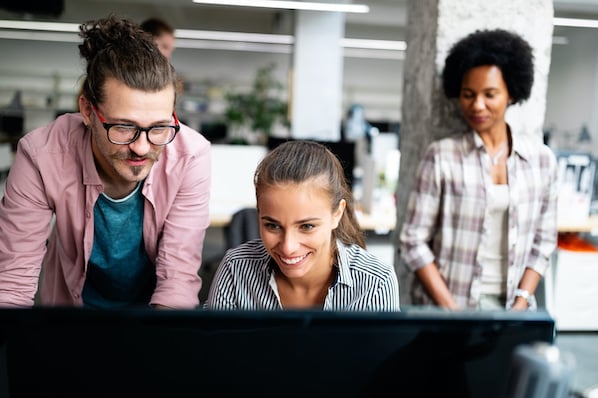 Opacity — and its opposite, transparency — can be used in website design to create contrast and reinforce a brand’s identity. For example, Bellavista Building Group’s homepage features a slightly transparent background image with text overlay. This design technique reflects their brand values, which include transparency as well as integrity and accountability.

Like horizontal scrolling, web textures, and many other web design techniques, opacity and transparency are best used sparingly and intentionally. Below we’ll walk through how to control the opacity of different elements, including:

How to Set Opacity in CSS

See the Pen How to Set Opacity in CSS by Christina Perricone (@hubspot) on CodePen.

Another way to set the opacity of an element is using RGBA color values. We’ll take a look at this method below.

In other words, if I style a div that contains text with the opacity property, then both the div and the text in the div will be transparent. That can make the text really difficult to read, as in the example below.

If you’d like to set the opacity of an element without affecting its child elements, then you need to use the CSS shorthand background property and RGBA color values instead.

RGB color codes is one way you can change the text color or background color of a web page in CSS. There’s also HTML color names and hex color codes, among other color models. What’s unique about the RGB color model is that you can control the color of an element and the opacity of that color.

To do so, you simply add an “a” to the rgb() prefix and add four values inside the parentheses. The first three numbers represent the intensity of the respective primary color (red, blue, green) as an integer between 0 and 255. The fourth value — ranging from 0 to 1 — sets the transparency of the color. 0 is completely transparent and 1 is completely opaque.

Let’s re-write the example above using the background property and RGBA color code.

To learn more about this and other color models, check out CSS Colors: What You Need to Know About HTML, Hex, RGB & HSL Color Values.

To set the opacity of text and only text, then you need to use the CSS color property and RGBA color values. Below, I’ll set a paragraph to be slightly transparent against a dark solid background color.

When adjusting the opacity of text, make sure you maintain a color contrast ratio so that all users — including those with disabilities related to vision — can see and read the text. The current Web Content Accessibility Guidelines (WCAG) require a ratio of 4.5:1 for normal text and a ratio of 3:1 for large text such as headings. Large text is defined as 18.66px and bold or larger, or 24px or larger. Large text is defined as at least 14 point bolded text or 18 point text.

For more information on color accessibility, check out How to Identify Web Accessible Colors for Products & Websites.

Below, I’ll set the border of a div to be black and very transparent so it provides a shadow effect.

See the Pen BaWwYVw by Christina Perricone (@hubspot) on CodePen.

You can set the opacity of an image in CSS as well. The opacity property is frequently used with the :hover selector to style an image. That way, the opacity of the image will change only when a user hovers over it. You have two options.

See the Pen CSS Image Opacity [With Examples On Hover] by Christina Perricone (@hubspot) on CodePen.

You can also combine the opacity property with the animation or transition property to create a fade-in image transition in CSS.

To create this type of gradient, you can’t use the CSS opacity property. Instead, you’d use the background property and RGBA color values. The process is similar to changing background opacity but instead of defining the background property with one set of RGBA color values, you’ll set the property to “linear-gradient.” Then specify the direction of the gradient and at least two color stops in parentheses. Below is an example.

See the Pen bGqoLmL by Christina Perricone (@hubspot) on CodePen.

HSLA is a color system that allows you to specify the hue, saturation, and lightness as well as the transparency of color.

HSLA is formatted similarly to RGBA color codes. It is composed of three numbers separated by commas. These numbers are then wrapped in parentheses and preceded by a lowercase “hsl.” You can add an “a” to “hsl” and a fourth value between 0 and 1 to set the transparency of the color.

While the first three numbers of RGB color codes represent the intensity of the respective primary color, the first three numbers of HSL color codes represent Hue, Saturation, and Lightness. Hue is measured in degrees on a scale of 0 – 360. Setting hue to 0 or 360 is red, 120 is green, 240 is blue. Saturation and Lightness are measured in percentages on a scale of 0 – 100. Saturation set to 0% is a shade of gray and 100% is the full color. Lightness set to 0% is black and 100% is white.

In the example below, I set the color of one div but don’t add an alpha parameter. As a result, it’s fully opaque by default. I set the color and opacity of the other div so it’s 50% see-through.

Notice that the text contained within the div is not affected so it is easy to read. That’s why you can change out the RGBA values used in any of the examples above for the respective HSLA values and achieve the same result.

If you want to create contrast and make text pop on your website, then you can use the CSS opacity property — or RGBA or HSLA color values —  to control the opacity of different elements on the page. You’ll just need to be familiar with some HTML and CSS.