What Is GitHub? (And What Is It Used For?) 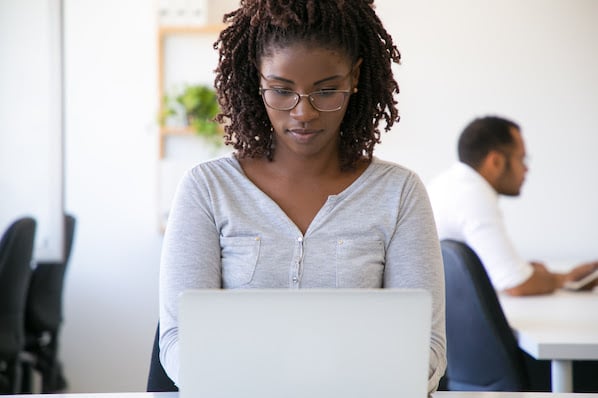 There’s a good chance you’ve heard of GitHub if you’re in the tech space, even if you’re not a developer by trade. You might have even stumbled across a GitHub repository or two when learning about software or web development.

Still, GitHub can seem perplexing if you’ve never used it. Is it a cloud storage site? A social networking site for programmers? A code-sharing site? As it turns out, the answer to all of these is yes, and more.

Today, GitHub is one of the most popular resources for developers to share code and work on projects together. It’s free, easy to use, and has become central in the movement toward open-source software.

If this all sounds like something you should know, read on — we’ll explain what GitHub is, why it’s popular, how to get started, and, perhaps most importantly, what “Git” actually means.

GitHub is an online software development platform used for storing, tracking, and collaborating on software projects. It enables developers to upload their own code files and to collaborate with fellow developers on open-source projects. GitHub also serves as a social networking site in which developers can openly network, collaborate, and pitch their work.

Since its founding in 2008, GitHub has acquired millions of users and established itself as a go-to platform for collaborative software projects. The service is free and comes with several helpful features for sharing code and working with others in real-time.

On top of its code-related functions, GitHub also encourages users to build a personal profile and brand for themselves. You can visit anyone’s profile and see what projects they own and contribute to. This makes GitHub a type of social network for programmers and fosters a collaborative approach to software and website development.

We’ll discuss GitHub in more detail in a bit. But first, we’ll need to understand the technology that GitHub is based on, Git.

Git is open-source version control software, used for managing and tracking file revisions. It can be used with any file type, but is most often used for tracking code files. Git is the most widely used version control system in software development, and GitHub leverages this technology for its service, hence its name.

You’ve likely worked with some form of version control before. For example, Google Docs (as well as other Google Workspace tools) has a “Version History” tool where you can view changes to the document at different points in time. Microsoft Office has something similar with its “Track Changes” feature. Or, you might prefer saving multiple copies of a file and labeling them “v1”, “v2”, etc.

Advanced version control is necessary for software projects, especially collaborative ones. When building software, developers are frequently and simultaneously updating the code to add features and fix bugs. It wouldn’t make sense to make these changes to the source code directly, since any issues would affect users. Instead, developers work with their own copies of the code, then — after the code has been thoroughly tested — add this code to the main codebase.

That seems all well and good. But, with multiple contributors, things can get very messy very quickly if there’s no way to combine everyone’s contributions into one unified codebase or see who contributed what changes. These changes also must be tracked and stored in case something breaks and the developers need to backtrack and restore a previous version.

This is what Git is for. When a developer wants to make a change to the software, they download their own copy of the source code from its central storage location (called a repository, or “repo” for short) to their local system, make modifications safely to their own copy, then merge their revised copy back with the source files in the repository along with comments explaining the changes. Git tracks all of these modifications and stores previous versions as backups.

What is GitHub used for?

GitHub allows software developers and engineers to create remote, public-facing repositories on the cloud for free. Once you’ve set up a repository on GitHub, you can copy it to your device, add and modify files locally, then “push” your changes back to the repository where your changes are displayed to the public.

So, why would you prefer GitHub over developing with a private repository? Here are the key reasons why GitHub is such a big player:

The single biggest selling point of GitHub is its set of project collaboration features, including version control and access control.

To illustrate what’s possible with GitHub, imagine this scenario: You want to code up an online game, and you enlist your friend to help you. You create a repository on GitHub that stores all the files, including current and past versions, then give your friend collaborator access to this repo as well.

You decide to work on the main gameplay and screens while your partner tackles the game’s menu and settings screens. In order for you both to push your changes at the same time without interfering with the other’s work, you create a branch — a separate development area — where your teammate can build out their screens. Meanwhile, you continue work in your branch.

Once your friend finishes their work, they can make a pull request asking to combine their work with yours. If you approve, you can merge your branches, and thus your code.

Now, say another developer sees your game’s repository and has an idea to add multiplayer mode. They can fork — or make their own copy of — your repository, then add their new features. Once finished, they can submit a pull request to you. If you approve, this forked repository merges with yours, and your game is now multiplayer! Note that anyone can fork a public repository, but it's up to the repository owners to accept or reject pull requests.

Of course, no software is perfect on the first go, which is why your GitHub repo also has an Issues section for listing to-dos and reporting problems with your game, discussing them, and marking them resolved. To address these issues, you might look back at a file’s changelog to see when and where things went wrong.

To sum up, GitHub provides a centralized space where several, dozens, or even thousands of developers can seamlessly contribute to a project, without worrying about overriding anyone’s work or losing track of changes.

GitHub adds a sleek graphical user interface (GUI) layer on top of Git. On its own, Git operates through the command line (a computer’s text-based interface). Developers know how to use the command line, but for many, it’s not always the most efficient way to interact with files.

GitHub’s interface provides a clean and user-friendly means to perform Git actions as well as view file history. This is more convenient for developers and more accessible for beginners getting the hang of Git.

Another benefit that makes GitHub more accessible is its cloud-based infrastructure. A GitHub user may access their repository from any location and any device, download the repository, and push their changes. Using GitHub means you’re not limited to one device or environment.

Any GitHub user knows the platform is more than just a place to work on code. All GitHub users have profiles to display their projects, contributions, and activity on the site, and can see anyone’s public-facing profile and repositories. 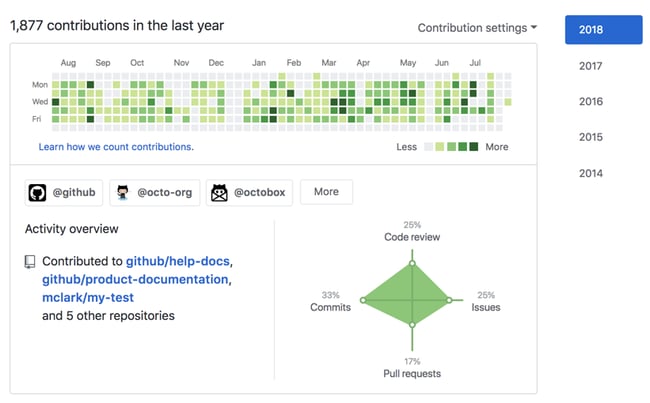 GitHub’s social network is critical to its success, as it encourages developers to explore and contribute to open-source projects of all kinds. Previously, aspiring collaborators would have to personally reach out to project owners asking for permission to contribute. With GitHub, it’s as easy as forking a project and then making a pull request. A project owner can then vet someone’s profile and past contributions before accepting their request.

GitHub also serves as a way to showcase projects for employers, acting as a portfolio of sorts. For example, recruiters often use GitHub to scout talent, since prospects’ code is available for anyone to review.

Thanks to the benefits we’ve learned about, GitHub has fueled a surge of open-source collaboration, leading to the creation of many widely used software technologies. From CSS frameworks to data visualization libraries to a game you might spend too much time playing, a lot of impressive feats wouldn’t be around without open GitHub repositories.

As has been a trend with Web 2.0, GitHub has also opened up software development to anyone who wants to learn programming, fostering an engaged, innovative, and productive community.

Sure, that’s all great, but how does GitHub make money if everything is free and open-source?

The answer is that GitHub provides paid services as well, including private repositories. On a paid plan, teams can collaborate on GitHub while keeping their code behind closed virtual doors. GitHub also offers enterprise solutions that equip organizations with internal collaboration tools.

How to Get Started Using GitHub

Sold on GitHub? Here’s how to get started. Just a heads up: You should be comfortable using the command line before working with GitHub, as Git uses the terminal as its interface.

1. Install the latest version of Git on your device. You’ll need Git installed to work with your GitHub repository. There are various ways to do this, so follow the recommendations on the Git website. The Git software is free.

3. Once your GitHub account is set up, you’ll be taken to your dashboard. To start your first repository, click Create repository on the left side. 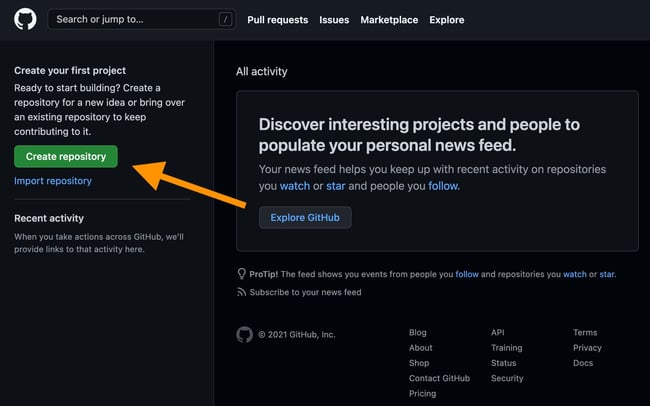 4. On the Create a new repository screen, enter your repository name and an optional description (you can change both later).

5. On the same screen, add a README file (a text file that describes your project, and a best practice in development), a .gitignore (which removes irrelevant files like .DS_Store), and a license for your project. 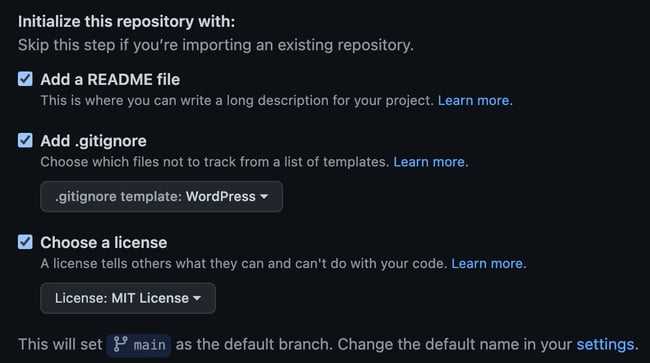 6. Click Create repository. You’ll be taken to your main repository page, which lists your files.

7. You’ll now create a local copy of your GitHub repository (or in GitHub terms, “clone” your repository) where you’ll edit your files and push your changes. On your main repository page, click the green Code button, then copy the HTTPS URL of your repository. 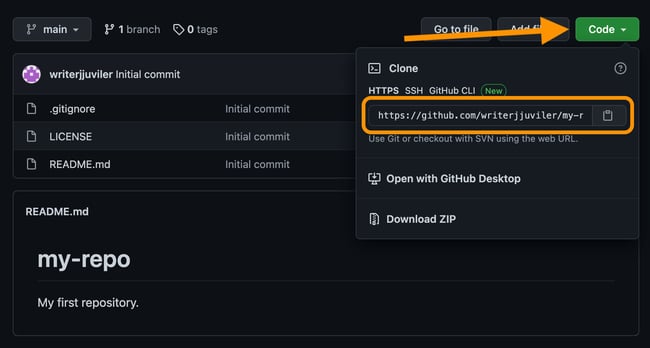 8. Open your terminal and navigate to the directory you want to place your repository copy.

9. In the terminal, enter git clone. After this paste in the repository URL that you previously copied. Your command should look like this:

11. Let’s end by creating a new file in your cloned repository, then pushing it to GitHub. In your local clone, create a new text file called hello.txt. In it, paste the text Hello, world! and save the file.

12. In the terminal, navigate to inside your cloned repository.

13. In the terminal, type git add . and press Enter. This prepares all files in your cloned repository to be pushed.

14. In the terminal, type git commit -m “added hello.txt” and press Enter. This commits your changes to the changelog. The text in quotes is a comment briefly describing the purpose of the commit.

16. Back in your GitHub repository, you’ll see your new file added.

GitHub: The Platform Behind the Software

When we think of technological innovations, it’s sometimes easy to attribute everything to one person — think Steve Jobs or Bill Gates. Of course, the reality is that software advances thanks to the millions of professional and amateur developers working together to develop new things in new ways.

That’s the beauty of GitHub: It lowers the barrier of entry for collaboration, so anyone can pitch in their ideas toward projects of their choice, or start a project of their own. It’s difficult to imagine the world of open-source software before GitHub — indeed, there sure was a lot less of it. Now, it’s ready for anyone to explore, including you.

How to Use Inspect Element in Chrome, Safari, and Firefox

How to Hire Remote Developers in 2022