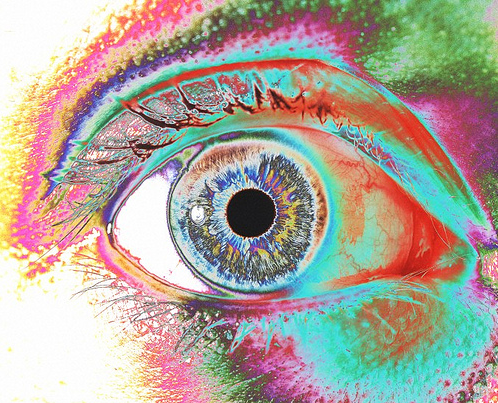 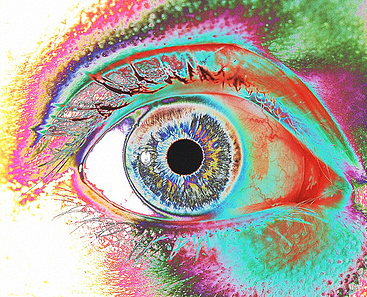 Have you ever heard of heatmapping? It's some pretty cool technology that lets you see where people are looking on a website. If you're ever testing a new website design or creating a really important landing page, you can use heatmap technology to see where peoples' eyes linger. If they aren't looking at the areas on the page you want to emphasize, you know you might have some design flaws.

I told you that story to tell you this one. Mashable commissioned EyeTrackShop, a startup that performs heatmap studies for marketers, to see where people look on popular social media sites. They covered everything from Facebook and Twitter to Pinterest and Reddit, and though the sample size is pretty small and doesn't always include the business pages, the results are interesting for social media marketers nonetheless. You can see the heatmaps for all of the social media networks they researched on Mashable, but we'll focus on what they found for Facebook, Twitter, Google+, and LinkedIn. And of course, the marketing takeaway from all this heatmap research.

Facebook's heatmap shows people spend the most time looking at the profile picture and the first two posts on the page. The profile information at the top of the page also ranks high, as does the list of friends on the side. As you move past the halfway mark of the page, visual attention drops significantly. 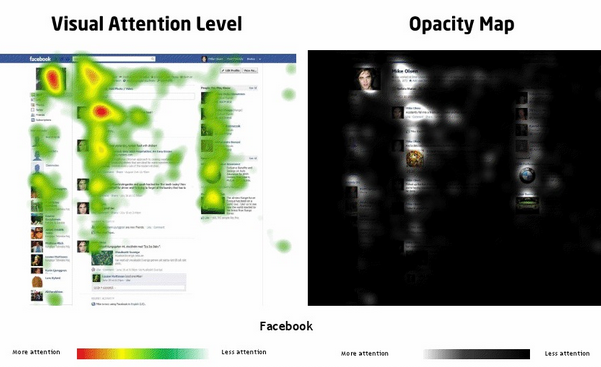 EyeTrackShop also shared a metric called fixation order, which is the order in which most people looked at areas of interest on the page. Interestingly, most people on Facebook started by looking at the middle of the page where status updates are posted, then went to the left panel where friends are listed. 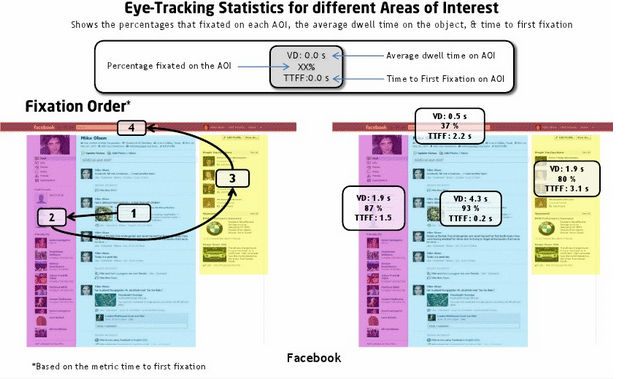 Despite being larger, the Google+ profile photo doesn't attract as much attention as the Facebook profile photo. The most attention was paid to the name, tagline, and first post. Like on Facebook, someone's Circles was also of interest. 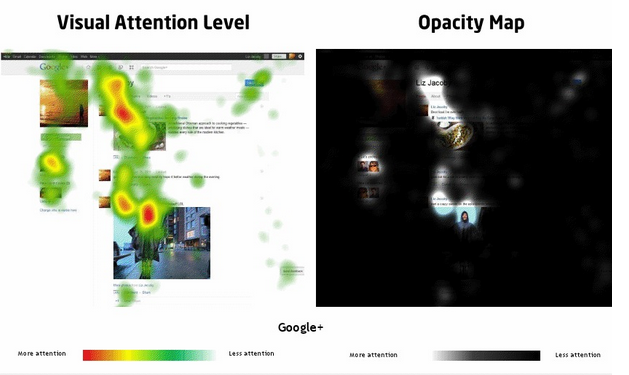 Viewers spend an average of 5.9 seconds in the middle of the Google+ page, which is slightly longer than is spent on the middle of the Facebook and LinkedIn pages. This might be due to the fact that this is a new network, and people are still trying to understand what they are looking at and how they can interact with content. 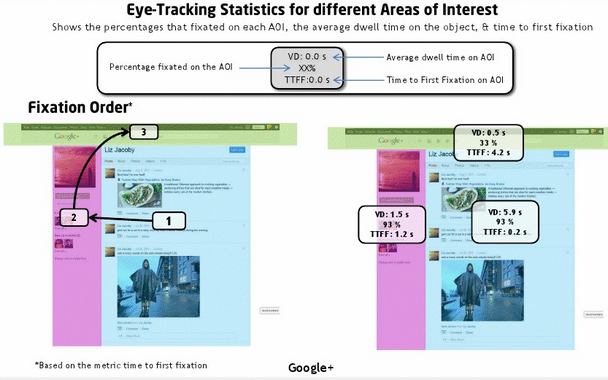 The most notable viewing pattern on Twitter is how far down the eye goes on the screen compared to other social networks. Because of the pace at which tweets come through though, this is not surprising, as users are used to scrolling further down the page to see tweet streams. 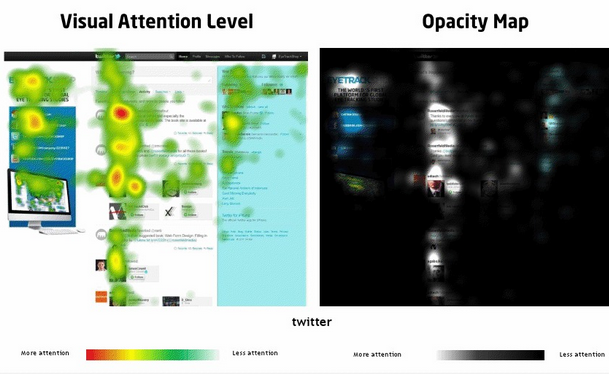 At 3.1 seconds, Twitter's average dwell time for the middle of the page is significantly lower than on the other three social media networks. Again, because of the fast-moving nature of this social media network, people are probably quickly clicking onto another page from here. 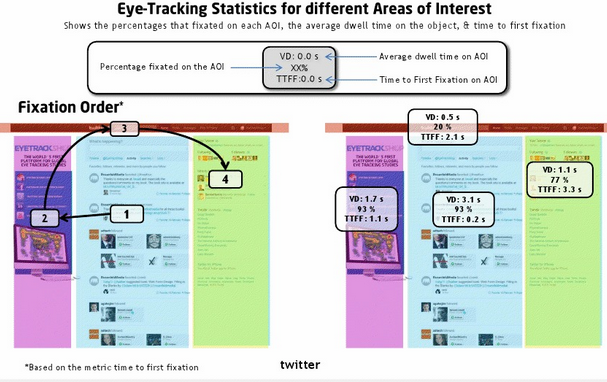 It's all about your title on LinkedIn; overwhelmingly the eye is mostly focused on someone's name and job. As with all social networks, the picture receives some time in the spotlight, as does the section that displays a person's education, connections, and recommendations. People do scan down to work experience as well, but they seem to only linger on the most recent place of employment. 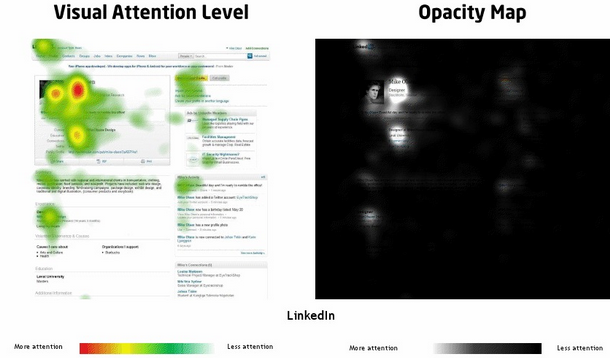 Most of the time is spent on the middle of the page on LinkedIn, after which it appears users move to the right to take some sort of action (e.g. see if they are connected, and if not, potentially connect). 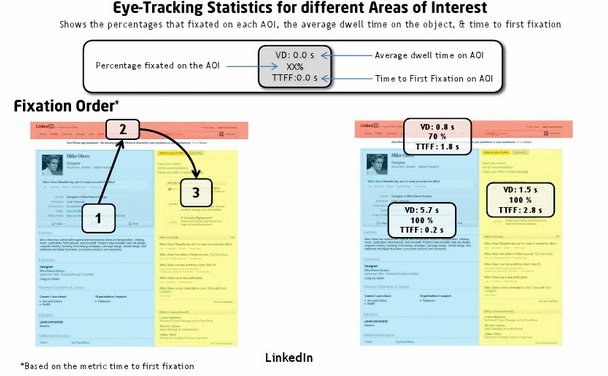 The importance of profile photos is not diminishing. Give a face to your social media accounts, because (shocker!) people want to socialize with human beings!

Social media networks also showed the most attention garnered to the top left sections of the page -- where titles, names, and the first status update reside. That means you should make it easy for people to identify who you are by choosing a name that clearly identifies who you are (and if you're on Google+, an awesome tagline) so you pass a user's blink test.

And though status updates are dynamic, whatever is at the top is clearly important to visitors, so don't post updates willy nilly just to keep your profile fed. Take an extra 10 seconds to ask yourself whether this update is interesting and engaging. If it is, you'll have better luck getting visitors to "fixate" on your profile.

Have you ever used heatmapping technology? Where do you think people spend the most time on your social media accounts?