The Top 10 Most Remarkable Marketing & Advertising Campaigns EVER [Slideshow]

worthy of being or likely to be noticed, especially as being uncommon or extraordinary

When Seth Godin wrote his book, Purple Cow: Transform Your Business By Being Remarkable, he forced a lot of marketers to face the fact that we'd slowly but surely been digging our own graves via boring, traditional "mass marketing" -- and that the only way out was to stop being part of the herd, and "be remarkable."

There are a lot of advantages to being remarkable. Decreased sales and marketing spend, for one. Unfair competitive advantage, for another. And quite possibly, category domination and greater customer lifetime value.

But getting there isn't easy. In fact, most marketers don't have a clue where to begin.

So here's an idea: Start by learning from THE BEST.

We've compiled our very own list of "The Top 10 Most Remarkable Marketing Campaigns EVER," and included (in the slideshow embedded below and the text beneath it) a few juicy details explaining what made each campaign so remarkable, and what strategies you should literally STEAL, er ... borrow, as inpiration for your next marketing initiative.

The Top 10 Most Remarkable Marketing Campaigns EVER 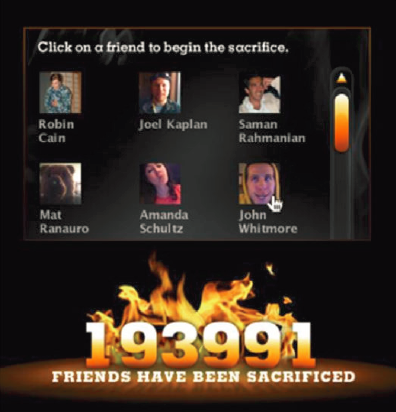 Sounds simple enough, right? But what made this campaign particularly remarkable is that it challenged the very nature of the platform on which it played out, and tapped into the essence of how social networks have changed our ideas of what “friendship” means. Whopper Sacrifice (a Facebook app) launched in early 2009 with little fanfare and almost no media support — and lasted only 10 days before Facebook shut it down on the basis of “user privacy violation” (the app notified friends when they were deleted). Sure, they gave away 20,000 free Whoppers. But the infamy and buzz they gained? Priceless. 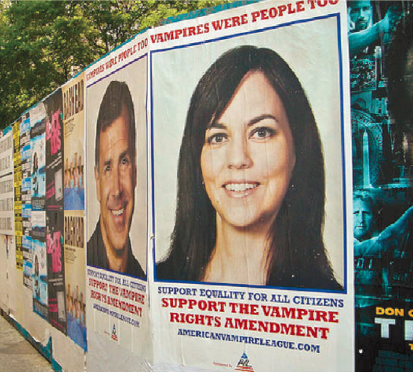 What made the marketing campaign for HBO’s first season of True Blood so remarkable was the way it was woven into the mythology of the show itself. Vials of a mysterious red liquid with messages in a “dead language” were mailed to goth and horror bloggers, leading them to a “vampire-only” website called BloodCopy.com. Videos featuring “real vampires” debating whether or not they should reveal themselves to an unsuspecting human populace were “leaked.” An outdoor poster campaign promoting a new beverage called TruBlood (available for sale at www.trubeverage.com) and featuring PSAs supporting equal rights for vampires appeared in major metro areas -- none of which ever mentioned the TV show.

By creating a complex backstory about a synthetic beverage that enabled vampires to “live among humans,” HBO and its creative partner, Campfire, were able to tap into an existing community of horror aficionados and organically build an audience that made True Blood one of HBO’s most anticipated and successful show debuts. 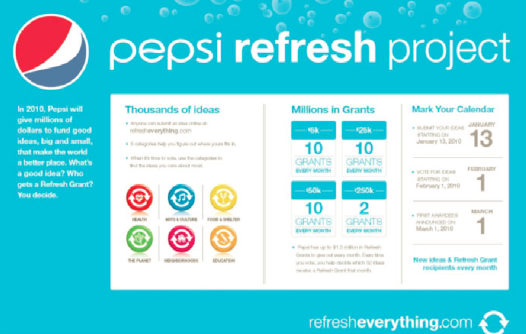 After 23 years and hundreds of millions of dollars spent on Super Bowl ads, one of the world’s biggest brands broke new ground in 2010 by opting out of the Super Bowl and pouring 1/3 of
its annual marketing budget into a cause-driven social marketing campaign called "The Refresh Project."

The Refresh Project featured a pledge from Pepsi to hand out more than $20 million in grants to do-good projects in six categories and in what has since been coined “crowd-sourced philanthropy” (the audience voted on who got the grants). Sadly, the campaign was pulled after 10 months due to fraud allegations and slipping market share -- yet the influence of The Refresh Project as a remarkable example of behemoth brands committing more dollars (and brain cells) to digital and social media continues to be felt. 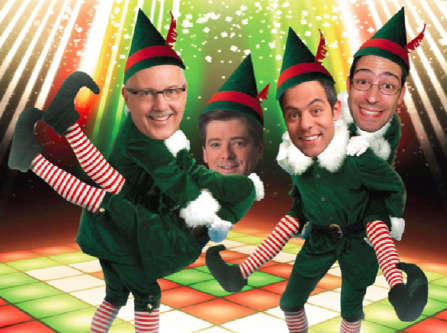 Who knew uploading images of yourself, friends, or loved ones -- then watching them dance as Christmas elves -- would be so remarkable? It was a simple idea, but at the time of its launch in 2006, a groundbreaking one. Let people star in their own interactive ecard? Virtually unheard of … but totally awesome. Six years and over half a billion shares later, Elf Yourself can boast not only of being a viral phenomenon, but also an enduring success -- one that has literally become a holiday tradition. 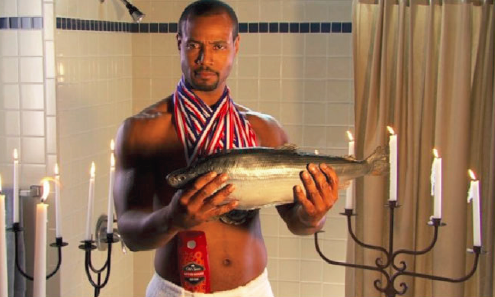 The Old Spice Man debuted in a 2010 Super Bowl ad, bringing humor, sex appeal, and intrigue to a brand that was all but forgotten. Five months later, he made marketing history by appearing in a series of 180 near real-time videos that not only got the attention of celebrities like Demi Moore and Ellen DeGeneres, but also helped Procter & Gamble amass over 40 million views on YouTube and enjoy a 107% increase in body wash sales within 30 days of the campaign launch.

5) The Best Job in the World 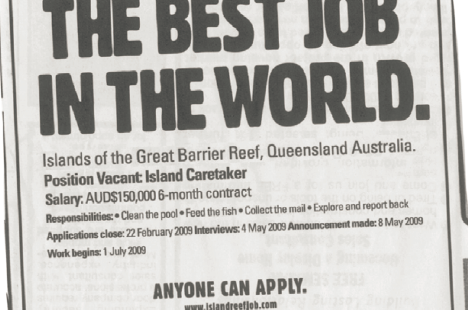 Wait … you want to pay me $150,000 to spend 6 months cleaning the pool, feeding the fish, collecting the mail, and exploring a gorgeous, little-known island off the Great Barrier Reef? And all I have to do is submit a one-minute video about why I should get the job? Yes, yes, that’s exactly what the Queensland Board of Tourism did in 2009 in a remarkable campaign that relied on a most unlikely media channel -- the "Jobs" section of newspapers.

Fueled by an extraordinary streak of PR and clever use of social media, the Board received over 7 million visitors, 34,000 applicants from 200 countries, and 500,000 votes for this once-in-a-lifetime job. And the lucky winner? Well, he continues his reign of Remarkableness as the Ambassador of Queensland Tourism. Lucky bastard. 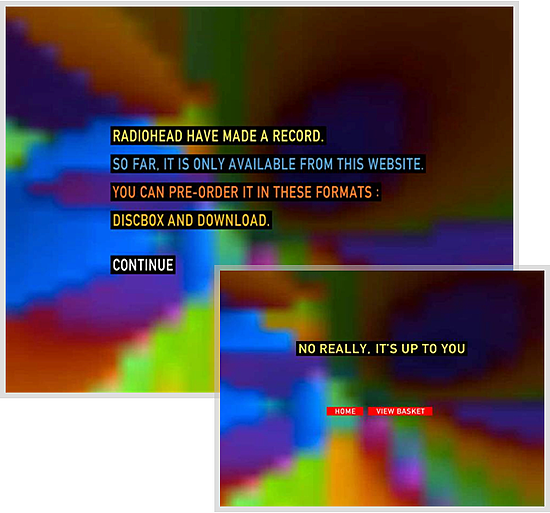 The music industry used to have a really simple formula: talent + record label + plastic discs = dollars. But digital and social technology completely disrupted that formula -- and a few risk-taking, innovative folks like Thom Yorke of Radiohead, disrupted right back. In Rainbows, which was the band’s seventh album, was released directly to fans with an offer that was altogether unheard of: Pay what you want.

To date, the band reports that their OMFG! strategy paid off -- with 3 million downloads in the first year and a cool $10 million in revenue -- by far, the band’s biggest commercial success EVER. It’s no wonder The New York Times hailed this establishment-bucking quintet from Oxfordshire as a band “fast becoming as
synonymous with technological mischief as they are with music.” BOO-YA! 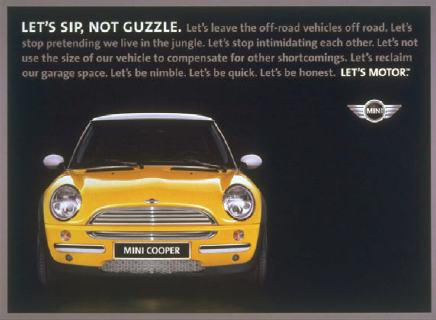 In Europe, the Mini Cooper had long been an icon. But in the gas-guzzling, SUV-loving USA, the teeny weeny Mini had only 2% brand awareness and even less market share. So what’s a clever marketer to do? Why, accentuate that difference, of course!

Rather than pursue the same-old, same-old TV/print/radio ad formula that most car brands were following at the time, Mini and its ever-innovating agency partner decided to eschew traditional media in favor of playing up the fun-factor of the car itself -- in shopping malls, on street corners, glued to billboards … and other unlikely places where only a tiny vehicle with awesome gas mileage and a kind price tag could shine. Ten years later, Mini had not only far surpassed its goals of market share and sales in an indisputably disastrous automobile market -- it also saw the U.S. surpass the UK as the brand’s biggest-selling single market in the world. 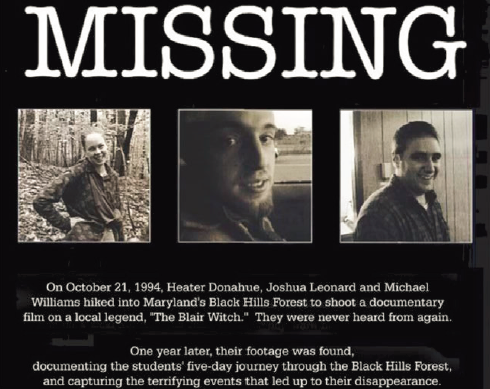 Arguably the very first online “viral” marketing campaign predating YouTube, Facebook, MySpace, and even Friendster, The Blair Witch Project remains an often-imitated, never-duplicated runaway success. Shot on a shoestring budget of just $22,000, the film raked in over $250 million, thanks in part to its novel approach of terrifying audiences into believing that the fictitious story of three missing film students was 100% real. The key? A deft combination of "found footage,” strategically seeded rumors on online message boards, and a series of low-budget ads and trailers that perpetuated the legend. 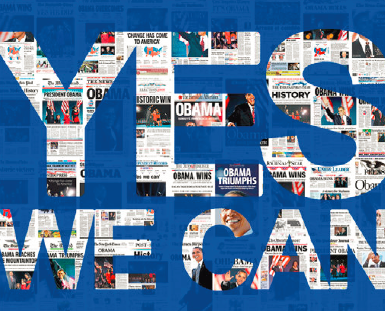 In early 2007, Barack Obama was a one-term senator with a funny-sounding name and less than 10% brand recognition. Eighteen months later, Obama went on to raise more money than any other presidential candidate in U.S. history, ultimately landing him the title of 44th President of the United States of America.

How did he achieve this? In part, because of a brilliantly executed marketing campaign that leveraged social technology and grassroots support in ways his competitors hadn’t even considered. He dominated not only YouTube with over 20 million views, but also claimed the most popular fan page on Facebook (with 2.5 million fans vs. McCain’s 625,000 at the time), broke down barriers with his social media-friendly campaign website that bestowed genuine, in-action photos, videos, and issue-oriented calls-to-action upon its visitors daily -- and ultimately, rode that online popularity all the way to the White House, becoming not only the first U.S. President to have a presence on social media, but also the first one to fully grasp and connect with his constituents across ALL of the channels that matter to them now.

What other marketing campaigns have you found truly remarkable?