What makes a college logo great?

Think about your alma mater for a second. Do you have a school bumper sticker with the logo emblazoned on it? A hat? A sweatshirt? A flag? Or perhaps all of the above?

If you still bleed your school colors and rock your school swag whenever possible, then chances are, your university did a pretty good job designing its logo. According to the principles of great logo design, the best logos are simple, memorable, timeless, versatile, and appropriate.

Want to see some examples of awesome college logo designs? You're in the right place. I chatted with my colleague, Tyler Littwin, art director here at HubSpot, to choose 12 of the best college logo designs from American universities. Check them out and learn what about their design makes them stand out -- in a good way.

12 of the Best College Logo Examples

University of Texas's longhorn silhouette is the hallmark of classic and timeless logo design. The logo hasn't changed since its introduction in 1961, and it remains one of the most iconic college sports logos in the world.

"Any logo that works as a single color design is fantastic," says Littwin. "It's simple, iconic, and has a great tie-in to the 'hook 'em horns' hand symbol." 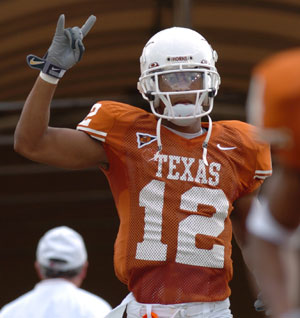 The interlocking NC, one of the University of North Carolina's athletics logos, features another timeless design -- this time with attention-grabbing colors. Walk into a packed crowd at the Dean Dome, and you'll see a sea of Carolina Blue, the official school color of UNC that dates back to the late eighteenth century.

Tyler gives UNC's logo two thumbs up. "Classic," he says. "A+ from me. Beyond the logotype, the color is a great bit of branding."

The "Attack Cat," which represents Ohio University's bobcat mascot, replaced a simple green paw print in 2002 as the school's official athletics logo. While many OU alumni were disappointed with the change -- citing it as too intense -- Littwin likes the new design.

As an objective observer, he says, "It's a good integration of an illustration with type. The whiskers create a nice baseline for the arced text. There’s also an overall nice balance: The bobcat is recognizable and 'Ohio' is still 100% legible."

"As iconic and simple of a logo as you could ask for," says Littwin. "I am also a huge fan of the yellow and green color scheme. It reminds me of the Oakland A’s, the Norwich Canaries, and so on."

The Notre Dame monogram is the university's most recognizable logo, and it's used for athletics and academics alike. The school's official brand standards call it "recognizable," "representative," "welcoming," and "approachable."

As for what Littwin thinks? "I’m a sucker for really basic logotypes like this one, UNC's, and Iowa State's. They're wonderfully old-school and no-nonsense. Always going to get my vote."

Even Notre Dame's trademarked "Fighting Irish" logo is impressively well-designed for such a unique mascot. "I prefer the stylized 'ND' logo, but there's something really vintage and cool about this surly Irishman," says Littwin. "Normally the more cartoony logos lose me, but this one is a keeper." 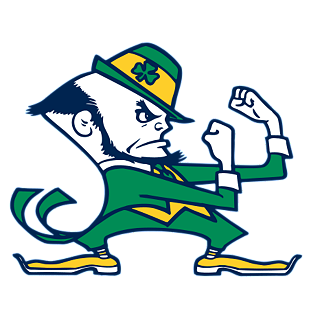 A reporter from the University of Miami's official student newspaper said it best: "There are thousands of universities across the nation, but only one gets to be The U."

The Miami athletics' iconic split-U logo wasn't created until 1973, several years after the student-athlete scholarship fund first commissioned a logo redesign. It was designed by publicist Julian Cole, the first graduate of UM’s radio and television department, and graphic artist Bill Bodenhamer, who both were also responsible for designing the Miami Dolphins' current logo.

“If you think about it, it was quite a stretch,” said Lisa Cole, one of Cole’s daughters. “They took the U and said, ‘This is the university.'"

But it worked, and a hype surrounding the "U" developed over the following few years. It was used for slogans like, "U gotta believe." Littwin calls it "minimalist and recognizable to a brilliant degree."

Even an effort to find a logo replacement in 1979 by Henry King Stanford -- the university's president at the time -- failed, thanks to heavy student campaigning against the change. Nowadays, as with the University of Texas' longhorn symbol, the "U" has its own hand symbol. "Throwing up the U" means holding your hands in the air like this: 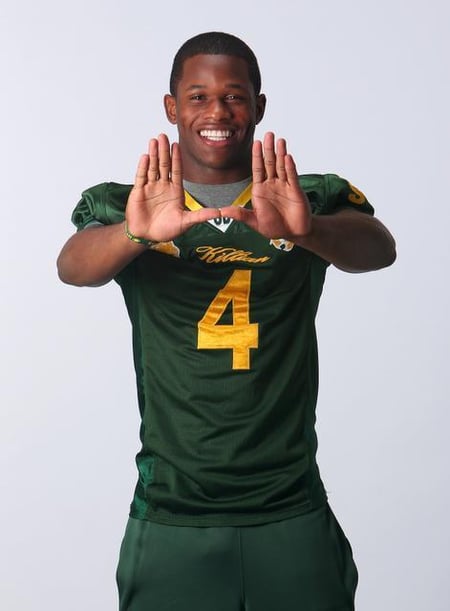 Clemson's tiger paw logo is another one of the most widely recognized collegiate logos in the United States. Although it seems timeless, it actually wasn't introduced until 1970 -- the end of a rebranding campaign that began when the school first admitted women and minorities in 1950.

The logo itself represents a tiger's paw print, rough edges and all. An actual tiger was chosen as the subject for the logo, and the print comes from a cast that was made for the design. In fact, do you see the slight indentation at the bottom of the paw print? According to Clemson's official website, that comes from "a scar that the tiger who had been chosen as the subject for the logo had received before the cast was made."

The genuine paw print makes for a cool design. "The rough paw print is great and somehow works when paired with the more formal-looking type lockup," says Littwin.

Another subtle intricacy of the logo? The 30-degree angle represents the 1:00 p.m. kickoff typical for football games at the time.

While Bowdoin's mascot has been the Polar Bear for over 100 years, this particular version of its logo is fairly recent: It was made official by the university in 2008. A student reporter for the school's official student newspaper explains: "The new logo is intended to serve as a consistent and timeless graphic identity for the College."

Previously, the polar bear logo had been unofficial -- and it had been represented by everything from a "cartoonish" running polar bear on student keycards, to a "more aggressive" profile of a bear with its mouth open as if it were snarling.

"Noting that in the wild, polar bears have no predators other than man, and that a ferocious, growling mascot was not the image the college was looking to project," wrote the student reporter, "[VP for Communications and Public Affairs Scott] Hood said that there's 'something appealing about having a mascot that is looking directly at you.'"

Littwin agrees -- that's what makes this logo so strong. "The polar bear seems remarkably calm and composed," he says. "I trust him."

The Hofstra Pride logo was "developed to build a strong visual identity" for its athletic department, according to its official usage guide. It's represented by a pair of lions, male and female, that appear to be charging in the same direction. Furrowed brows and windswept manes give them a sense of determination and strength.

"The Pride conveys both the teamwork and togetherness that are traits of lions living in a pride, that have a close bond and work together for the good of the entire group," reads the guide. It was created for the university's athletic department in 2005.

"A very clever and awesome design," notes Littwin. "It's rare to see a university get both sexes of a mascot into the same logo. Well done, Hofstra."

Missouri Western State University started using the Griffon logo in 1973, several years before the school became a fully funded four-year state college. Why a Griffon? Because "it was considered a guardian of riches, and education was viewed as a precious treasure," reads the school's official website.

The logo symbolizes more than just a mythical animal, though. Notice anything special about its shape? If you look closely, the outline of the Griffon resembles the shape of the state of Missouri. Check it out: 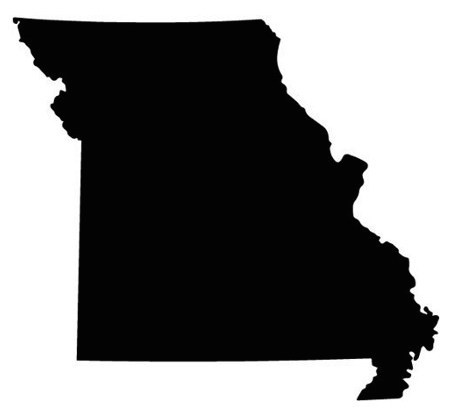 Littwin loves the hidden message. "It's a clever design that also works even if you don’t pick up on the geographic reference," he says.

The Panthers (originally the "Golden Panthers") replaced the Sunblazers as Florida International University's nickname in 1987 when Roary the Panther became its official mascot.

The logo represents a cool perspective -- it seems to be coming out of the logo directly at the reader.

Littwin agrees. "I love the head-on perspective of this," he says. "There's something atypical and nicely menacing about it."

The University of Hawai'i "H" logo was created for the athletic department in 2000. While the "H" clearly stands for Hawai'i, the school's official website says it also represents the Hawaiian expression "ha," meaning "breath" in Hawaiian. "The spirit of life passed on to us from one person to another, generation to generation, with lessons and success," the website reads.

The cool patterns you see on either side of the "H" were inspired by Hawaiian kapa designs, which derive from native Hawaiian art. "I really like the kapa aesthetic and the simplicity of a one letter logo," says Littwin.