Think of every group project you’ve been in – whether in high school, college, internship, or other. 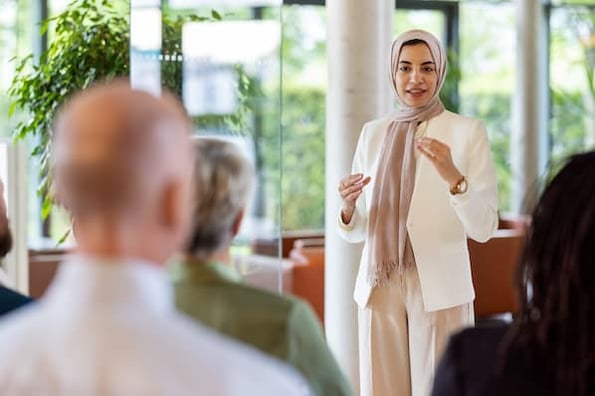 Often, someone would naturally take the reigns without being officially appointed as the leader – that’s called emergent leadership and it’s something you may want to leverage in your professional life.

Learn the key characteristics of emergent leadership, examples of it in daily life, and the benefits of this approach.

What is emergent leadership?

Emergent leadership happens when a team allows a leader to naturally arise within group interactions instead of appointing one from the beginning. With this approach, employees can feel more empowered to take ownership of successes and failures at their organizations.

Emergent leadership allows the right leader to be elected once they have demonstrated their potential in group settings. This will be someone who has earned the respect and trust of their colleagues and are able to inspire them.

Too often, companies bring in new leaders and there’s a big adjustment period. They may struggle with communication, understanding their teams’ values, establishing trust, or a number of key elements needed to propel a team forward.

This approach democratizes leadership by letting employees make key decisions regarding not only their leaders but also their projects. As a result, you can get employees who are more invested in the company and serve as its champion.

Promoting emergent leadership within your team is all about fostering an environment of collaboration and ownership. As a manager, you will serve as a resource while allowing your team to take the lead.

By creating this environment, your direct reports will feel comfortable bringing their full selves to work and take the lead whenever their skills align.

Wondering how to identify a leader within your organization? Here are some key traits to look for.

A key characteristic of any leader is someone who is capable of impacting someone’s character and/or behavior.

Look for comments from team members like "X suggested this approach," and "After speaking with X, I…" – Statements like these demonstrate the impact that someone has on other members of the team.

If anything, a leader should be reliable as it’s key to building trust. It means you rely on that person to be consistent and dependable. Whether that’s in their work, communication, or another format.

How do your direct reports show up for others? Do they provide resources? Are they available to mentor? Do they follow through? If the answer’s "yes," you’ve got a reliable person on your hands.

A great leader helps others feel they are capable of more. When you’re evaluating your staff, an emergent leader is someone who brings fresh ideas and perspectives, cheers others on, and is always striving to improve.

Emergent leadership can only happen in a collaborative environment. Look for people who celebrate new perspectives, create space for others, and invite knowledge exchanges.

The most popular example of emergent leadership comes from the famous medical TV drama, "Grey’s Anatomy." In one episode, residents were tasked with solving a difficult case together. The goal was to help them work better together but also see who would naturally emerge as the leader of the group.

The most extroverted person in the group often seems like the obvious choice but that’s not always the answer. Just like in real life, the emergent leader in the show was the one who displayed an ability to listen, delegate, make decisions, and inspire confidence from others.

Now back to real life.

Photo app VSCO is one company that leverages emergent leadership to encourage brand champions in its own employees.

According to its former VP of People and Places, Katy Shields, the brand believes that giving up control early on in the company’s growth can help it self-correct in the face of adversity.

Back in 2015, Laszlo Bock, former SVP of People Operations at Google explained how Google tackled this.

He said, "What we realized…is that giving up power is just as important to leadership as seizing power."

Assigned leadership is the straightforward approach most organizations take. However, emergent leadership could prove to be more effective.