People will go to all sorts of lengths to get attention from a small subset of Facebook's 1.23 billion monthly active users. Sometimes it's good -- people focus on creating more compelling content or integrating Facebook with the rest of their marketing strategy. Though it takes more time, their Facebook Page grows steadily and actually delivers results. 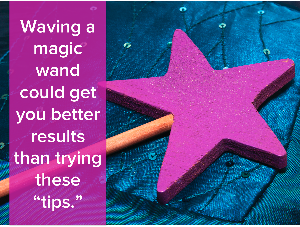 Other times people want to take the "easy" way out. They hear of some hack that got one company thousands of followers/page views/comments in a day and think they should start doing the same. They don't have the time to build a Facebook following -- they need eyeballs on their content now.

But there's little evidence to support that these "tips" work. They're like ads claiming to lose 20 pounds in a week. Bonus: some of these "hacks" could end up decreasing your Facebook performance.

So if you're going to spend time on Facebook to build your business, steer clear of the following "tips" that could do you more harm than good ... or could just do nothing at all.

This was a pretty popular myth going around about a year ago. Folks claimed that including a link to your content in the first comments instead of in the post itself would increase your chance of appearing in the News Feed because a photo-only or text-only post would perform better than those with links. Here's what that looks like: 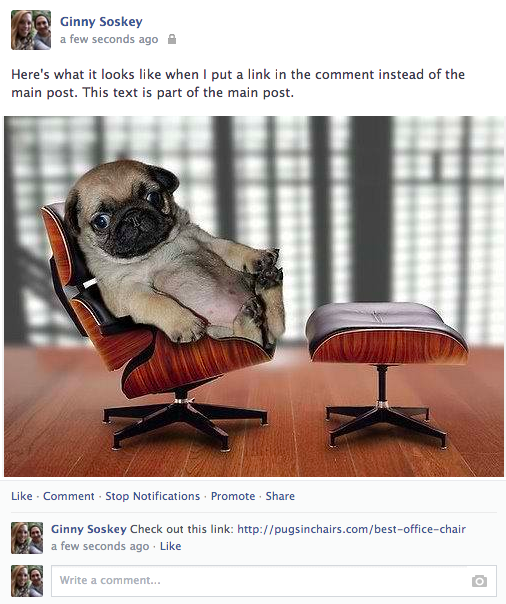 But this isn't exactly true. In fact, Facebook's algorithm has been promoting posts with links in them more recently and in the past, has favored photo updates. Only a few people have seen anecdotal evidence that this works -- and some haven't seen anything affected at all.

Maybe trying this "trick" on your page boosts numbers for a while, but it's actually a pretty terrible user experience. In the long run, you won't be serving your Fans and Followers -- the folks that you need to impress if you want to build your page -- because it takes much more effort to find your link than a normal Facebook post. If you have a large fan base, your link could even get buried (which is completely counterproductive). Don't get sucked into a fad for the sake of engagement -- solve for your Followers and all else will follow.

Second, when you link up your Facebook and Twitter accounts, your posts end up with really weird, Twitter-specific formats for your Facebook posts (and vice versa). It's very obvious that you just synced up your accounts -- your Facebook Page will have lots posts from the past day and zero engagement.

So don't rely on thoughtless automation to do this for you -- instead, create tailored posts for each platform. The extra time you put into to creating custom content will pay off.

This is probably one of top "tricks" people recommend to "build a following" on Facebook. If by "building a following", you mean "increasing number of Likes and Followers," this trick works. You buy followers and see that little number next to your page go up ...

... But if you're on Facebook to do anything else besides getting people to Like you, this is definitely a trick to ignore. If you want to grow an engaged audience that might eventually convert, buying Fans and Followers will actually harm your brand. Facebook will see that your percentage of your Fans engaging with your posts is suddenly way lower ... and might not include your next update in your Fans' feed. Before you know it, this "trick" could end up shooting your marketing in its proverbial foot.

4) Tagging Irrelevant People in Your Photos

When someone gets tagged in a photo on Facebook, they get a notification ... so some people suggest doing this to get random people to notice your brand.

Don't do it. This is a tactic that spammers have used in the past, and people are pretty wise to this trick now. Unless you are tagging someone in your photo that is actually in the photo, stay away. It's spammy and probably won't work, anyway.

Recently, Facebook updated its News Feed algorithm to reward brands tagging other brands in their posts -- but that doesn't mean that you should start tagging brands in every single post. Facebook will surface content to Fans of tagged pages if it's performing well in general and/or you also like the other page. They're pretty vague on the mathematics behind it all, but the takeaway is clear: This tactic should only be used when you have strategic and relevant content for both audiences. Here's an example of a post that strategically tags another brand:

I made up the word "engagementbait" but I know you've seen posts like these in your News Feed. Usually it's a picture with a caption like "We're offering two types of ice cream today: Vanilla and Chocolate. Like if you prefer vanilla, comment if you prefer chocolate, and share if you like them both!!!!!!"

Even if that post example were on Friendly's Facebook page and getting lots of Likes, comments, and shares, what do you think it's doing for the brand? Not much.

If you wanted to be generous, it could help you generate awareness of new products and potentially help you get your next post into the News Feed (because the engagementbait post was highly engaged with). But it's really not doing much to help your bottom line. And that's most likely why you're on Facebook.

Instead, try posting content that doesn't try to game the Facebook system -- content people like just ... because. This short term play may work for you, but in the long run, you're not going to be able to grow your following with it.

Back when Facebook first launched hashtags, people were pumped. Everyone started incorporating them into their Facebook content -- and heck, we even encouraged it. But since then, Edgerank Checker found that posts with hashtags have less Viral Reach than posts without hashtags.

So in the future, use hashtags sparingly on Facebook -- a good use case would be if you're trying to promote a cross-platform campaign that has a hashtag.

The moral of this all is that you really shouldn't be trying to "game" any part of building a presence on Facebook. What may work one day could be detrimental another, and you could end up hurting yourself in the name of "growth hacking" your Facebook page.

What other myths have you heard about growing your Facebook Page? Debunk them with us in the comments below.