The "Majority Illusion": A Mind Trick That'll Change Your Approach to Influencer Marketing

While getting a celebrity to hawk your product or service is a surefire way to get a ton of people to see it, most marketers can’t afford to partner with influencers who have millions of followers.

Luckily, recent research has good news for marketers whose budgets don’t allow for A-list influencer endorsements. According to this new finding, it may just take a handful of lesser-known but strategically connected influencers talking about your brand to help its popularity soar.

Intrigued? Let's dive into the research in more detail ...

How the Majority Illusion Gives the Appearance Popularity

A team of researchers led by Kristina Lerman at USC recently uncovered a social media phenomenon known as the majority illusion, which happens when certain members within a social network give the appearance that an idea, opinion, or product is more popular than it is. The majority illusion may explain why some people are susceptible to adopting unpopular opinions or how an entire movement can spread seemingly overnight.

The researchers’ findings have big implications for marketers because creating an illusion of popularity may be enough to actually make something become popular.

So how does the majority illusion happen?

In the illustration above, the red nodes represent members of a network who share some common attribute -- such as men with beards. Although both of these networks have the same structure, the red nodes are positioned differently.

This diagram illustrates how several well-connected individuals can skew the network’s perceptions. In the diagram on the left, a large percentage of the network will observe that people in their network have beards, making this attribute appear more common than it is.

Meanwhile, in the diagram on the right, the people with beards are less connected, so members of the group won’t perceive an abundance of bearded men in their network. Looking at these two examples, we might assume that people in the group on the left may be more likely to start growing beards, since it appears to be a popular trend in their social network.

Now that we’ve gotten the complicated science out of the way, let’s look at what the majority illusion means for your influencer marketing strategy.

How to Leverage the Majority Illusion for Influencer Marketing

According to the research, two types of influencers are most likely to create the majority illusion -- and both are good for achieving different types of goals.

If your influencer marketing strategy aims to achieve conversion-based goals, such as getting people to sign up for a free trial or buy your product, partnering with niche influencers may yield the best results.

Niche influencers with smaller but highly engaged audiences may not be your top-of-mind choice, but there are many benefits to working with influencers in niche communities as opposed to influencers with massive followings. For one, it turns out niche influencers may be the best choice for creating the majority illusion and moving their audience to take action.

The research found the majority illusion is most likely to happen in social networks where individual members with a low number of connections are connected to individuals with a high number of connections, which are group dynamics likely to occur in niche communities with a handful of popular members. Highly connected members of these tightly knit groups, or niche influencers, wield significant influence within their network. Less popular members of the group may be easily influenced since they are less exposed to outside ideas and opinions.

But the benefits don’t end there. Niche influencers are typically more accessible than A-list influencers, meaning they’re easier to partner with. They have closer relationships with their audiences, and they are more influential within their circles. Furthermore, through niche influencers you can reach audiences who are further down the buying cycle, such as in the consideration stage. When your brand’s niche closely aligns with the influencer’s niche, there’s a good chance they have an audience that is highly educated about your industry.

If you want your influencer marketing efforts to reach the widest possible audience, look for influencers who have cross-vertical appeal. Influencers positioned between several different communities are best for getting your message broadcasted to a range of different audiences.

To see this strategic positioning in action, we mapped out an interactive network graph of 77 influential voices on Twitter. In the below screenshot from the graph, you can see how Ann Handley -- aka @MarketingProfs -- has connections across several different industries, each represented by different colors. Each node represents an individual, and the lines represent connections between members. While Handley doesn’t have the most followers out of all the influencers in our network model, she certainly has a strategic position. 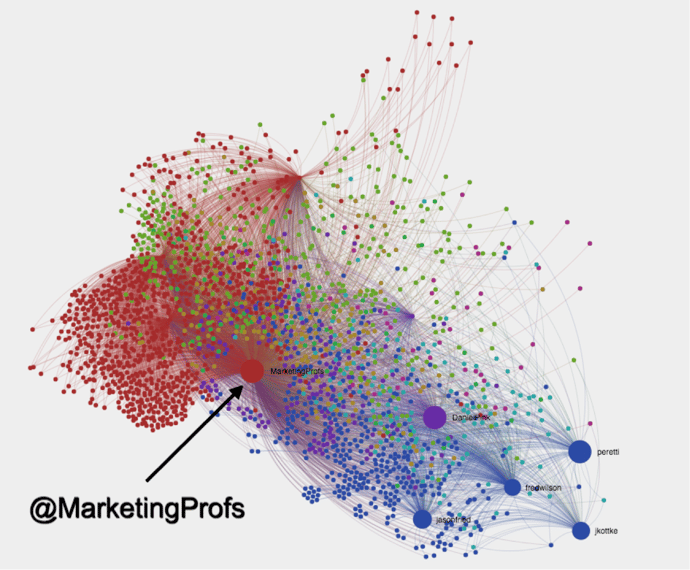 Remember: Influencers with the most followers aren’t necessarily the most influential. However, enlisting the help of just one or two niche or strategically placed influencers at a time may not make an impact. Timing is crucial. The more influencers you can get pushing your message at the same time, the better your chances for creating the majority illusion.