I have a love-hate relationship with my to-do list. If I didn’t keep track of every task I needed to tackle, important things would inevitably fall through the cracks.

But it can also be stressful and discouraging to look at my list at the end of a long day at work and realize I barely made a dent.

These conflicting experiences probably sound familiar to you. Sometimes you'll vastly underestimate the complexity or length of a task. Other times, you run around putting out fires rather than starting any of the projects you’d planned.

Marc Andreessen, co-founder of venture capital firm Andreessen Horowitz, has a potential solution. In addition to his traditional to-do list, he keeps an “anti to-do list.”

Every time you do something useful or productive, you write it down in your anti to-do list.

According to Andreessen, keeping track of your achievements (however minor) gives you small but periodic bursts of motivation. And when you’re ready to call it quits, looking at your accomplishments will make you feel productive -- but looking at your uncompleted tasks will only drain you.

I decided to put Andreessen’s technique to the test. After keeping an anti to-do list for a week, here’s what I learned.

1) It Makes You Feel More Accomplished

While traditional to-do lists make it easier to see what you need to work on next, they also hide your progress.

The anti to-do list, on the other hand, lets you visually “add up” what you’ve accomplished. It was so satisfying to see my list grow longer as the day went on. When 6 p.m. rolled around, I looked it over one last time. The rush of satisfaction was surprisingly powerful.

2) It Improves Your Focus

When I had something to look forward to at the end of every task, staying focused became less challenging. I knew scrolling through my Twitter feed for five minutes would be temporarily entertaining -- but it would also delay that sense of accomplishment I’d get once I’d answered this email and written down, “Followed up with John” in my anti to-do list.

Adding to the list became almost addicting. On Wednesday, I competed with myself to make a longer list than on Tuesday. And on Thursday, I was motivated by the idea of beating Wednesday’s list.

3) It Gives You Insight Into Your Work Patterns

Andreessen tears up his anti to-do lists every night, but I held onto mine. I wanted to compare my to-do lists with what I actually spent time on.

The results were enlightening. Many of the items on my to-do lists had little short-term value but huge long-term value: Think building relationships, learning new skills, and identifying potential opportunities. Day after day, these “pay-off” tasks ended up falling by the wayside in favor of more timely but less important ones.

So, I decided to set aside 90 minutes every day for important but not urgent tasks. This ensures that no matter what else is going on at work, I have time for things that’ll drive my future success.

My anti to-do list also revealed where I could be more efficient. For example, I realized I was spending time emailing my team members about questions that could have been resolved more quickly if I’d simply walked over to their desks.

Making these small changes might only save me a couple minutes per day, but those minutes will add up to hours and days over time.

Now It's Your Turn

Ready to try the anti do-do list yourself? You can borrow Andreessen’s method and write down everything on a physical list, but that can be inconvenient if your regular to-do list is digital.

For ultimate ease, I suggest storing your anti to-do listand your to-do list in the same place -- whether that’s a productivity app, an Evernote note, a Google doc, or somewhere else. Just make sure you give both lists separate titles to avoid any confusion.

Using a Kanban board app (like Trello or LeanKit) is another option. Unlike traditional task management apps, which put all of your items in a single column list, Kanban apps let you make multiple lists on a single page. I’ve set up my “anti to-do list” and “to-do list” next to each other, so I can easily compare them. 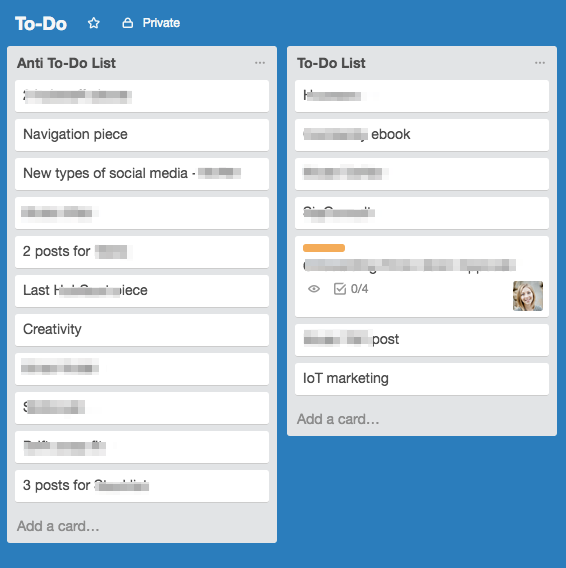 Keeping an anti to-do list has made a huge impact on my productivity, efficiency, and sense of fulfillment -- and it’s only been seven days. I’m excited to see how this habit helps even more going forward.

Will you start an anti to-do list? Let us know in the comments!

21 of the Best Electronic Signature Apps