Want to Lose a Prospect in 6 Words? Send Sales Emails Like These

We’re all inundated with emails these days. At last count, professionals sent and received 122 business-related emails per day. With built-in spam and promotions filters, consider yourself lucky if your outreach emails make it to your prospects’ inboxes at all. So make sure you don’t squander the opportunity -- a buyer’s attention is easy to lose.

Which is why Chris Handy, founder of inbound marketing agency Thinkhandy Marketing, was so turned off when he got the following cold email: 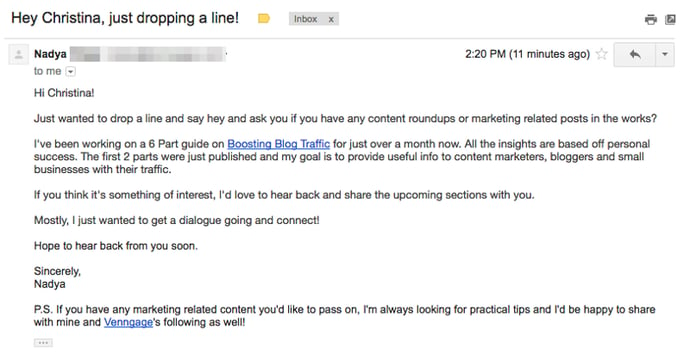 This rep’s email prospecting strategy, despite being cold, isn’t completely terrible. She doesn’t immediately pitch Handy on selling her service, and she provides some content she thinks is valuable that Handy might be interested in.

However, she doesn’t provide much of a reason Handy should respond to her sales email or why she thinks the content she’s providing is relevant. She also keeps the focus on her: She “wanted to drop a line,” she “would love to hear back,” and she “wanted to get a dialogue going -- not a word about what Handy could get out of speaking with her.

But Nadya makes a fatal mistake in the very first six words of her email: The subject line.

She calls Chris “Christina.” She does it twice. Once in the aforementioned subject line, and once more in the body of the email.

It doesn’t matter how good the email could have been, whether Handy could have benefited from using Nadya’s product, or if it made sense to connect. Handy’s interest was lost. Immediately.

“The sad part is that she had what looked like good content that was relevant and might be fairly interesting,” Handy writes in a Medium post on the topic. “How many other people will never do business with her company because of silly errors like this?”

When HubSpot VP of sales Pete Caputa shared Handy’s article with me, I was intrigued. On this blog, we always advocate adding value when you send an email to a prospect, whether it’s your first touch or your fifth. Of course, we also advocate getting your prospect’s name and basic demographic information right. I wondered: How do prospects balance potential value with writing basics? So I asked Handy:

“I’m curious to hear how you weigh factual/spelling errors vs. value. You say that the content seemed relevant and interesting -- any scenario where a pitch / offering would be SO valuable that you could overlook errors like this one? Or is the error itself enough to tank a salesperson’s credibility?”

Salespeople, pay attention, because the verdict is in.

“Salespeople and marketers should consider that when I (the prospect) process email, I’m typically in disqualifying mood by default,” Handy wrote back to me.

A simple typo -- “Chrs” instead of “Chris,” for example -- isn’t a big deal, although to make the best first impression it’s obviously best to spell everything correctly.

The real issue with this email, Handy said, is not that the error is incredibly offensive or irreparable. It’s the disrepect of Handy’s time that the error indicates. Not only did Nadya fumble his name twice, her email is entirely focused on what she wants to do, not what Handy will get out of working with her.

“In the lens of an email received, I view this as a respect issue,” Handy writes. “Email is cheap, but a prospect’s time and attention are definitely not. She lost the right to ask for my time when she didn’t give me any of hers in the form of 10 seconds of research to understand who she was emailing.”

The takeaway for sales reps is clear. Playing the numbers game seems like it’ll yield results. If you send out more emails, you’ll get more responses, right? In fact, taking the time to more thoroughly research buyers -- though it might decrease your volume -- will increase your response rates, because each individual prospect will receive a personalized email.

A second terrible prospecting email Handy got from a different sales rep further underscores the importance of valuing your prospect’s time. Here’s the preview Handy saw in his inbox:

The subject line and preview imply that Handy and Alex had a lengthy email exchange in the past, and so Handy opened the email. Here’s the message: 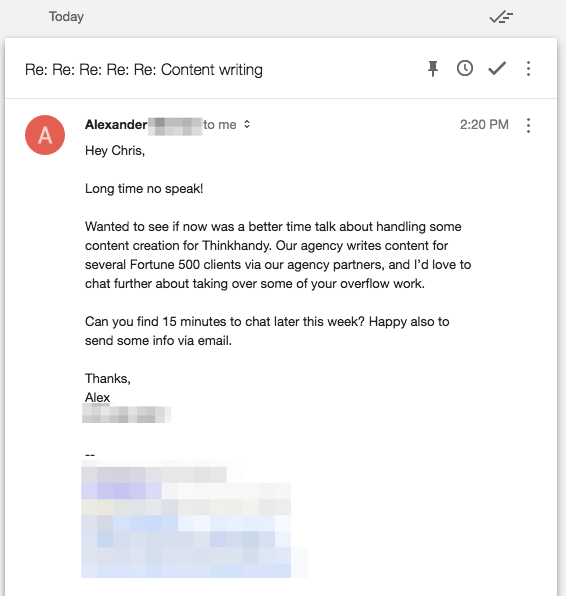 In reality, Alex and Handy had never spoken before. (Handy searched his inbox for Alex’s email to make sure he hadn’t just forgotten about it, and found nothing.)

Lying, according to Handy, is the worst thing a salesperson can do. Alex made no typos, but his dishonesty trumps everything else he got right. Yes, his deceptive subject line got Handy to open his message, but that’s not worth the bad blood he created with an outright lie.

Case closed, reps. Buyers don’t appreciate their time being wasted or being lied to. Make sure everything you do is on the level, and make real effort to customize a message to prospects. If you don’t respect their time, they won’t value a relationship with you.

What do you think of these two reps’ approaches to getting a prospect’s attention? Let us know in the comments below.

How to Find Almost Anyone's Email Address (Without Being Creepy)