The Sobering Truth: Why You Can’t Sell to C-Suite Executives

“Just stop,” spat the COO from across the table. 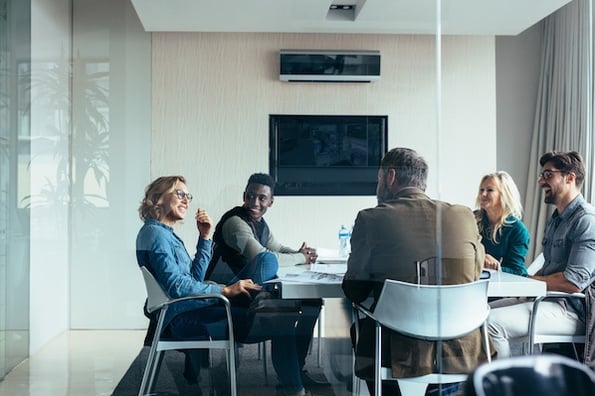 “I don’t have time for this generic line of questioning.”

I was two years into my first tech sales job, thinking I was doing everything right. I asked open-ended questions to unearth pain. Just like the sales books told me to do.

Yet this COO kicked my teeth in, leaving me and his ops manager twiddling our thumbs. “I’m as confused as you,” uttered the ops manager after the COO stormed out. “We teach our reps to ask the exact same questions.”

Have You Ever Been Here?

If you’re in sales, you’ve probably been in a similar situation. It happens to everyone at some point in their career. In this post, we’ll unpack how to prevent that from happening.

The COO in my story wasn’t simply cranky. He wasn’t “having a bad day.” It’s that -- according to our new data -- “discovery” is counterproductive in a few key situations.

Before you tear me to shreds, read on. It will make sense as we unfold the story.

I’ll start by explaining the data. Our team here at Gong.io analyzed recorded sales meetings from 39,105 deals made on web conferencing platforms.

They were transcribed and analyzed with AI to isolate successful and unsuccessful selling behaviors.

This study revealed our most counterintuitive insight yet: 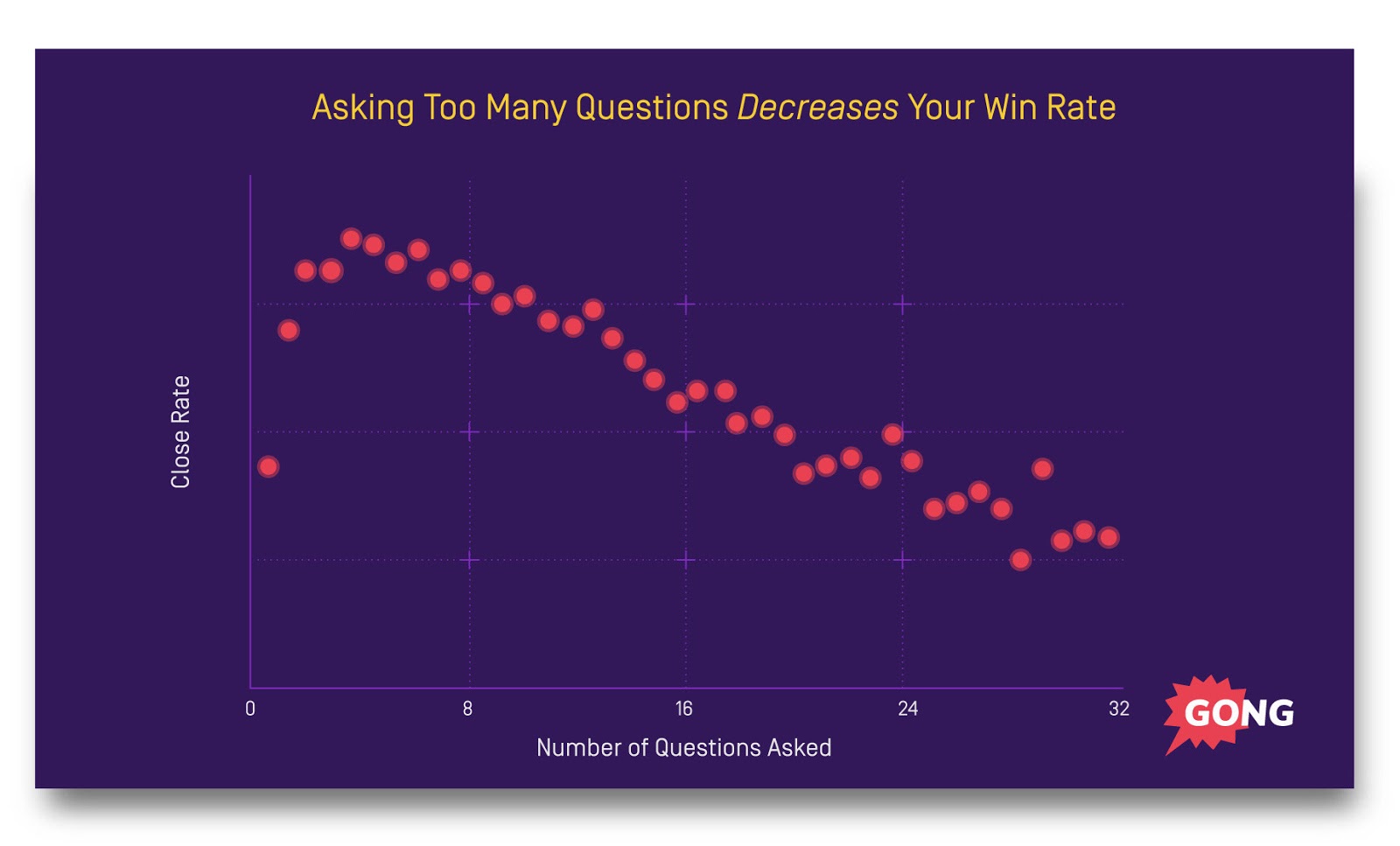 Once you’ve asked a small handful of questions, every additional question decreases your odds of success. 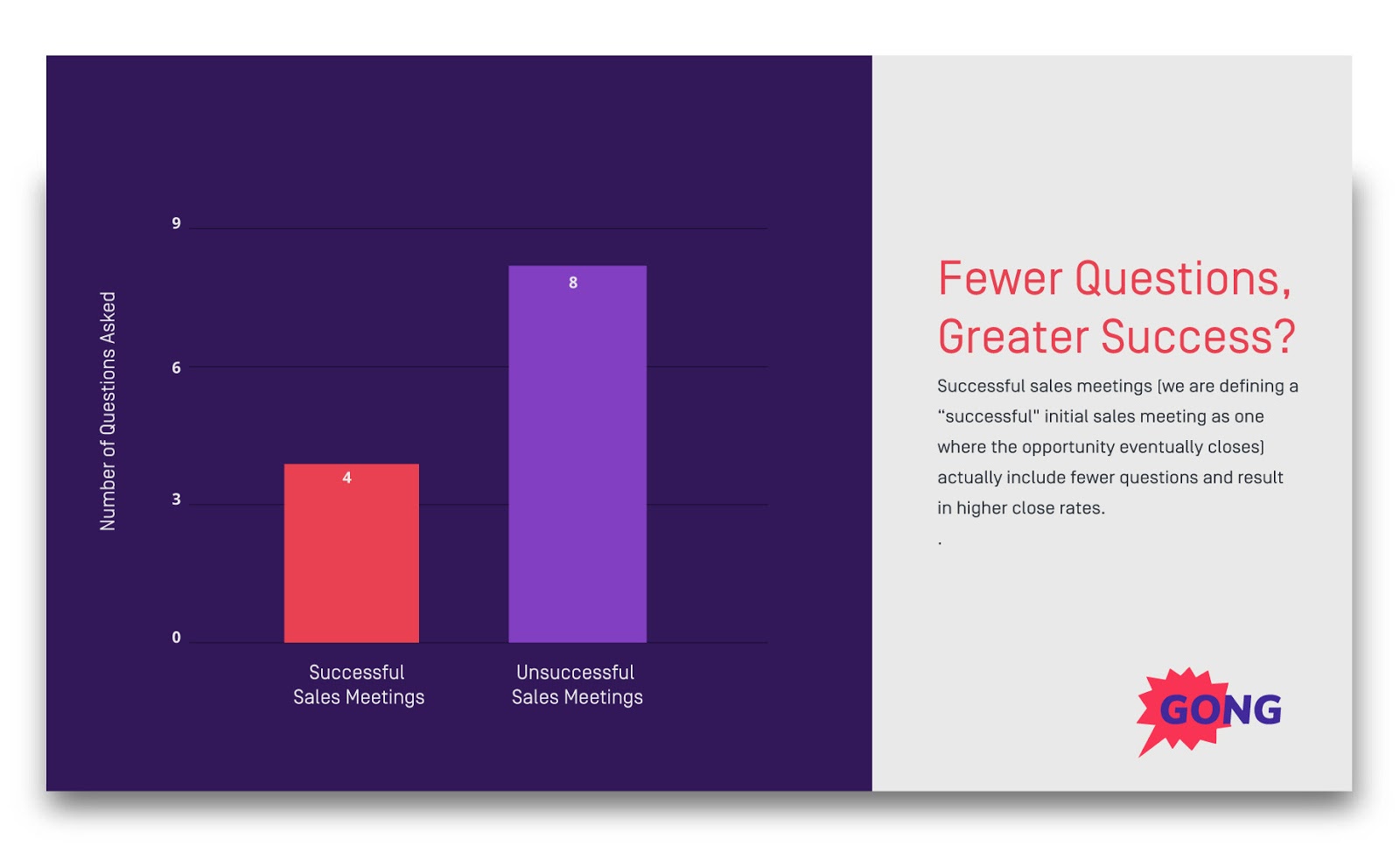 It’s important to note that the data above is specific to the first meeting with a deal. We wondered whether asking questions at other stages of the sales cycle has the same effect.

It turned out that yes, it’s more or less the same: 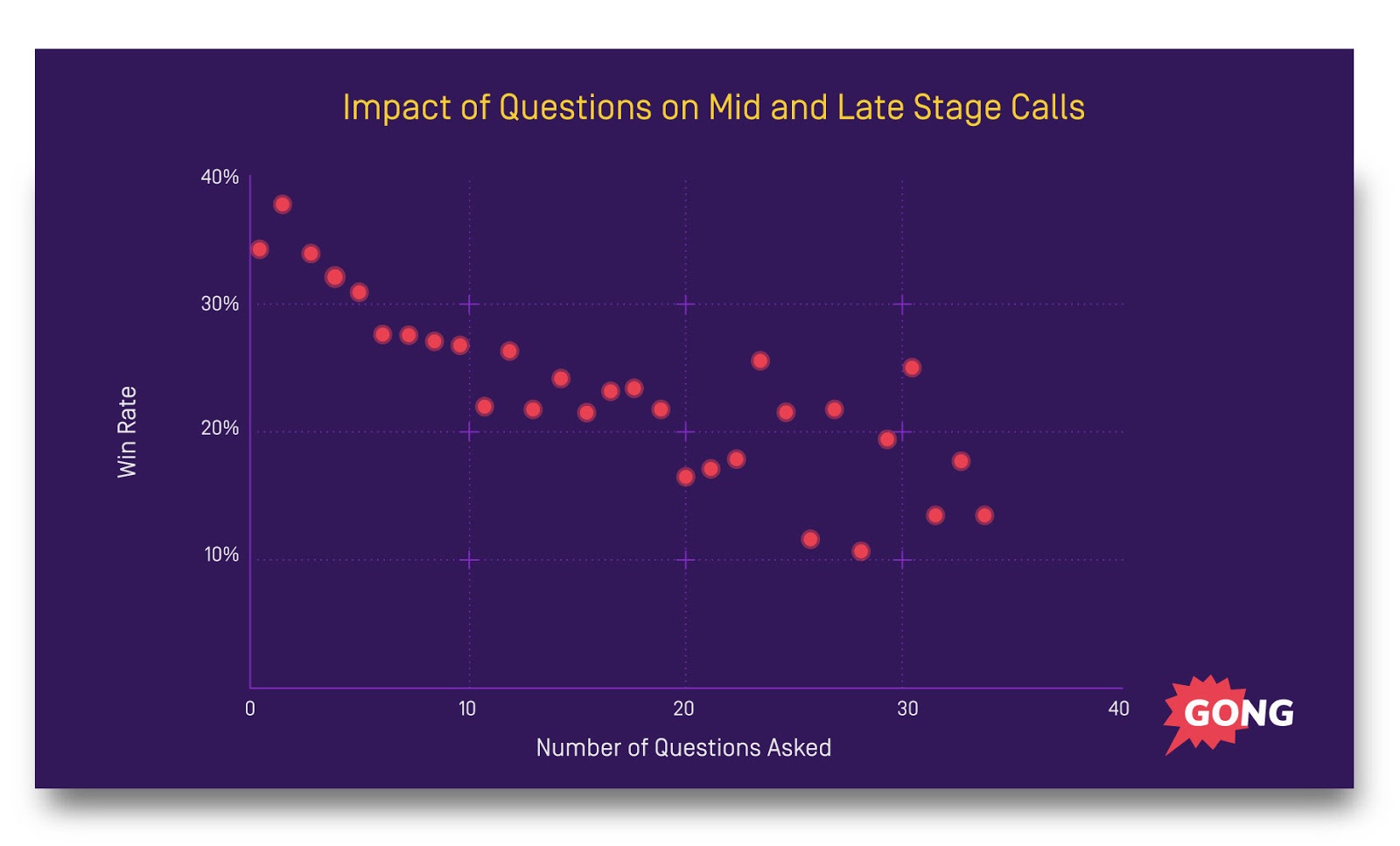 Two Gong Studies That Contradict Each Other?

I know what you might be thinking: “This totally goes against the research you published last year about discovery calls!”

For the unfamiliar, last year we analyzed 519,000 recorded discovery calls with AI. Some of the things we learned from last year’s study run counter to the data we just shared with you.

For example, last year’s study said that the ideal number of questions to ask on a discovery call is between 11 and 14: 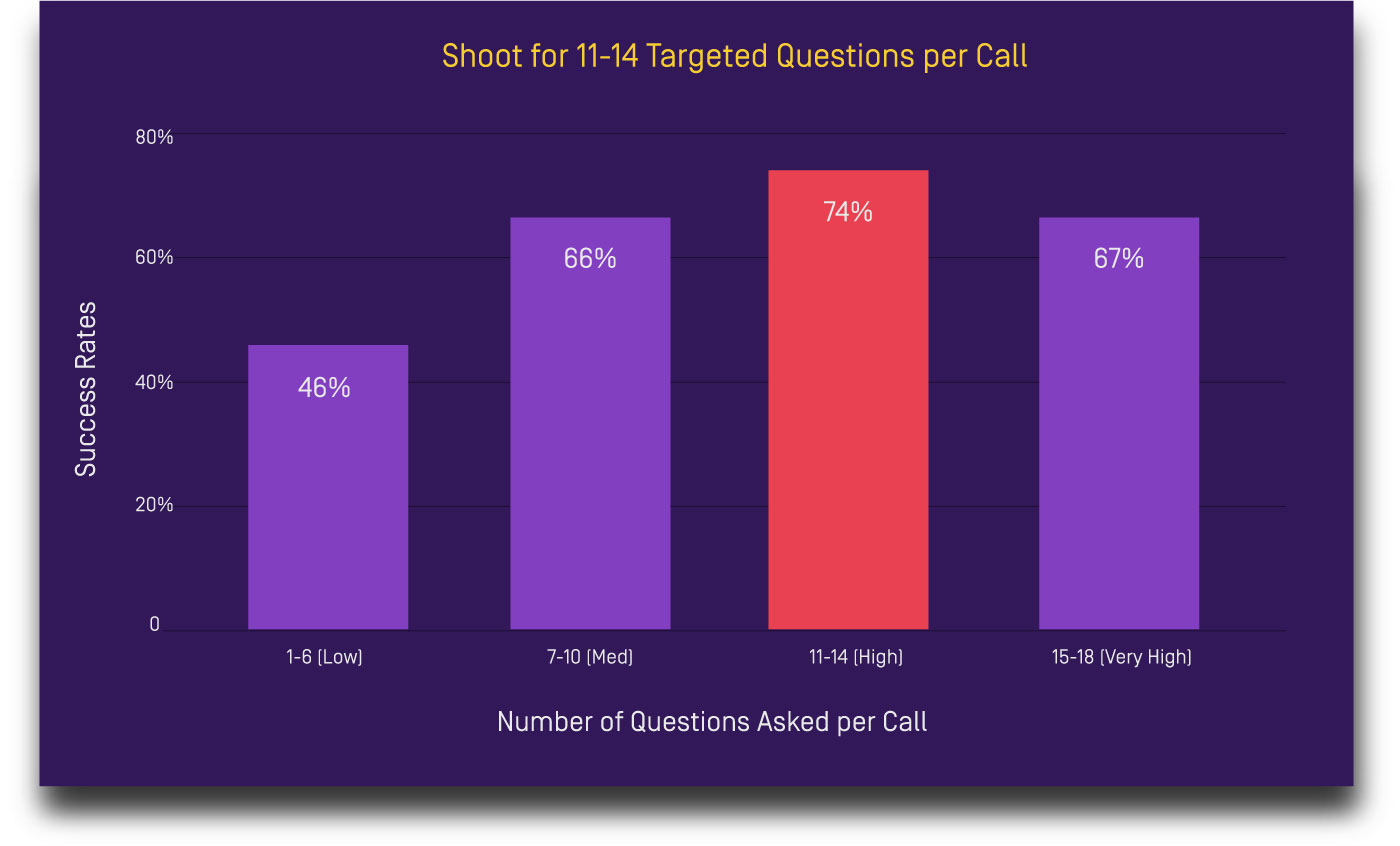 That’s a far cry from the recommended four questions we mentioned today. So, what gives? Why does the new data run counter to last year’s data?

Simple. The new data has one critical distinction: It’s based on sales calls where only an SVP-level buyer (or higher) was present.

In other words, the new study focuses on selling to senior decision makers at mid-sized and large companies.

This takes us back to our opening story. The COO -- a senior decision maker -- felt like he was being interrogated. He had probably been through the "discovery dance" with two-to-three other sellers already. It probably felt taxing to answer all those questions.

But it’s not just him. Senior decision makers in general are becoming fatigued by salespeople’s questions. In fact, you can practically see that fatigue play out over the course of a sales call: 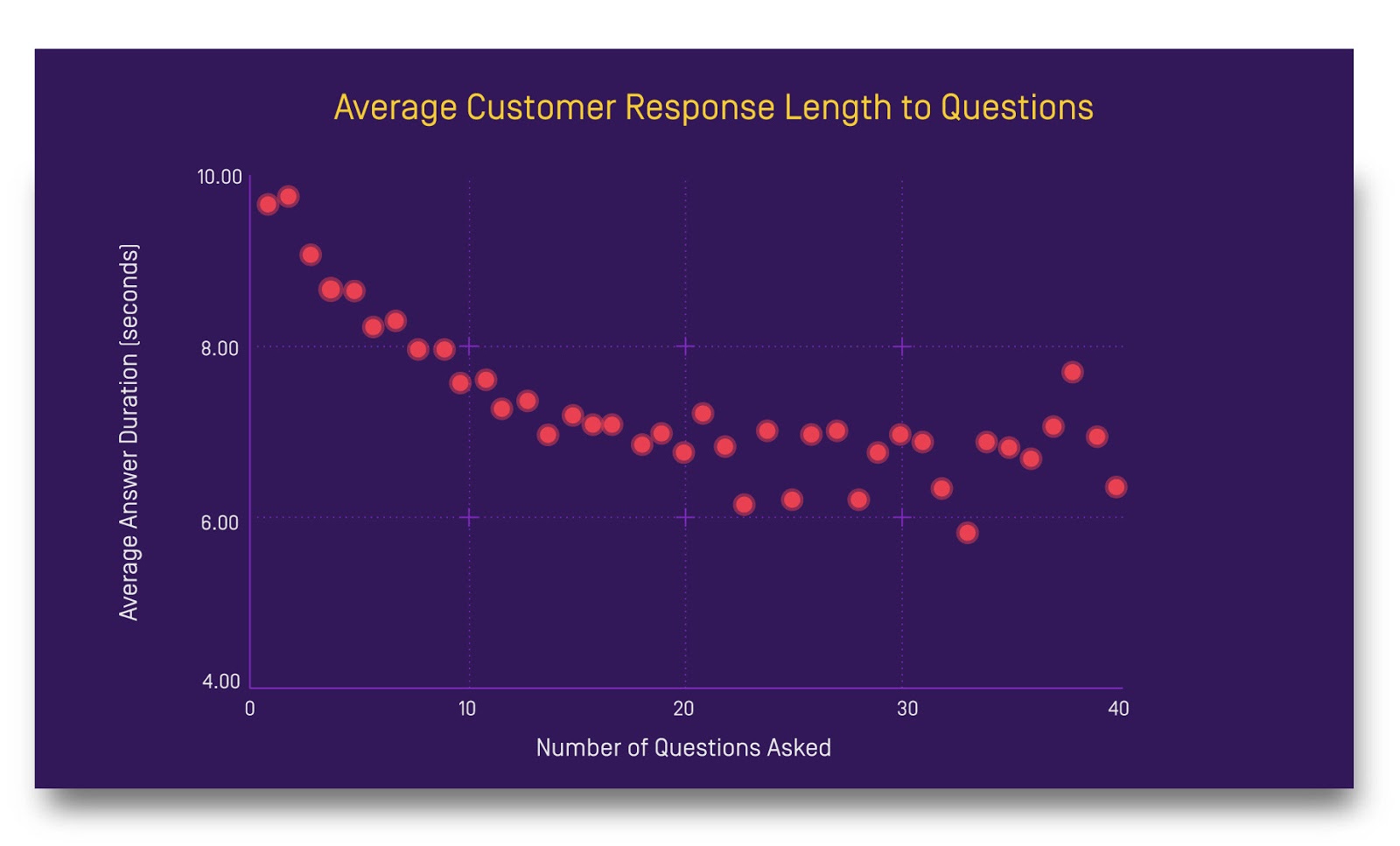 The more questions you ask, the shorter their response. Their patience wears thin. They’ll entertain the first few questions. But very quickly, you receive one-word, irritated answers. The rest of your sales call will feel like pulling teeth.

Most discovery questions benefit the seller. Not the buyer. They put the onus on the buyer to educate you. Those questions can quickly get annoying for an 80-hour-a-week executive.

Stephen Covey’s analogy below explains what’s happening: Everyone you interact with has an “emotional bank account.” With every interaction, you either make deposits or withdrawals.

When you make deposits, you add value and become closer to that person. “Withdrawals” are the opposite. They erode trust, credibility, or connection. Most sales questions make withdrawals from your senior buyer’s emotional bank account.

That’s particularly true when questions are overused, or used like an amateur. Which leads us to an important question: How do you make deposits instead? How do you sell to a senior buyer if they’re unwilling to entertain a discovery call?

Lead With Insights, Not Information Gathering

One of our customers -- a chief revenue officer -- said it best: “Your job isn’t to ask me what’s keeping me up at night. It’s to tell me what should be.”

That quote holds the key to selling to the C-Suite. Executives aren’t eager to answer a bunch of seller-enabling questions. They want sellers to alert them to threats they haven’t foreseen. Or opportunities that are hiding undetected.

Doing that requires no more than a few carefully crafted, economical questions. Just enough to get the conversation moving in the right direction. And here’s the key to building your sales conversations in this way: Educate these executives about external trends that threaten their status quo.

This is a powerful persuasion method because it uses loss aversion, which drives urgency. Loss aversion is the concept that people will work twice as hard to a avoid loss as they will to gain something.

Executives become driven with urgency when you show them how their current status quo is no longer viable.

How to Sell to the C-Suite

Using loss aversion and insight selling correctly is incredibly nuanced. There are many more wrong ways to do it than there are right ways. And if you get it wrong, you’ll get kicked in the teeth.

Helping you build your own framework for those types of sales calls is beyond the scope of this post. That’s why I hosted a live webinar that's now available on-demand as a recording. You’ll learn how to create high-urgency conversations with senior executives, step by step.

I’ll show you two real-life examples you can use as inspiration. You’ll also learn what to avoid, so you don’t get delegated to a lower level (or worse, walked out on).

So, here are two offers for you:

Offer #1: Watch the webinar. You’ll walk out with an entirely new strategy.

Offer #2: I’ll personally review the sales deck (or other messaging tool) of the best two commenters on LinkedIn.

In the Gong Labs series, we publish what we learn from analyzing sales conversations with AI. Subscribe here to read upcoming research.

This post first appeared on LinkedIn. It is republished here with permission.