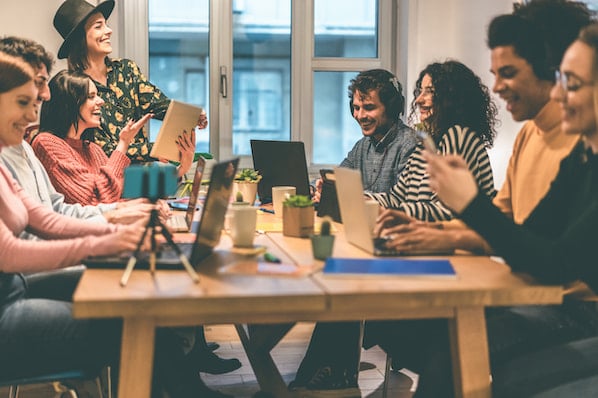 Since 2003, WordPress has evolved far beyond being just a blogging platform. Today, it’s a flexible content management system used by 42% of all sites on the internet.

As 2022 approaches, some key trends will continue to revolutionize the WordPress space and shake up related areas like theme development and ecommerce.

Here are some of our top predictions for WordPress in the upcoming year, including new use cases, features, and improvements we can expect from this popular content management system.

According to a study by WP Engine, 64 percent of enterprise respondents already use headless technology, and more than 90 percent of those not currently using headless plan to evaluate headless solutions over the next 12 months.

Given the continued adoption of headless technology in the enterprise market and WordPress’s existing market share, we can predict that many headless implementations will use, or continue to use, WordPress as the back end. In fact, in a press release by Business Wire, Jason Cohen, Founder and CTO of WP Engine, said, “Given WordPress now constitutes 40% of the entire web, powering many of the largest, most popular sites in the world, it makes sense that it will increasingly be a very popular choice for headless architectures.”

Full Site Editing refers to a collection of features that allows users to edit their entire website using blocks, instead of just posts and pages. This collection includes block patterns, global styles, templates, and design tools for blocks. Here’s a look at block patterns in the Gutenberg editor: 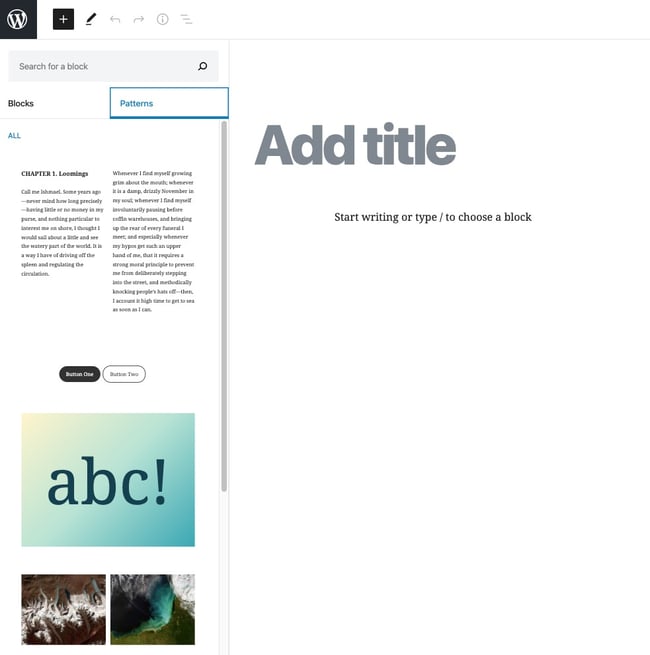 Full Site Editing is currently in an experimental phase, but is already changing the way users develop themes, edit their navigation menus, and more. We can expect more Full Site Editing features in upcoming releases of the WordPress core and Gutenberg editor.

Full Site Editing has led to a specific innovation known as block themes. A block theme is a WordPress theme with templates entirely composed of blocks. That means the Gutenberg block editor can be used to edit all areas of the site, including headers, footers, sidebars, post content, and more.

These themes are still experimental, which means they may change drastically based on feedback, but more and more are being created. For example, the default theme Twenty Twenty-Two will be a block theme. Here’s a preview of it: 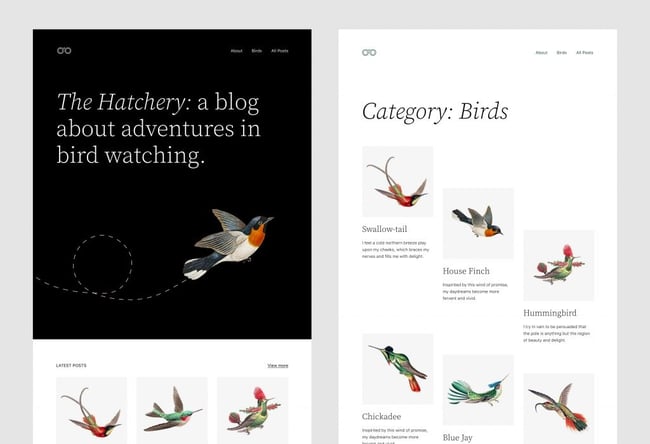 You can check out this repository for more block theme examples created by the WordPress community.

Gutenberg is following a four-phase roadmap that will touch major pieces of WordPress. We’re already seeing it change the way users edit and customize their websites and themes. For example, the latest version of the block editor — Gutenberg 11.6 — released in October 2021 included several improvements, like block-level locking and basic support for child themes. 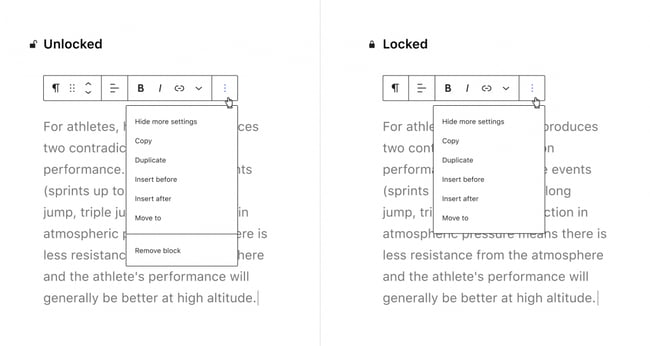 The next phases are collaboration and multilingual, so we can expect to see advancements in those categories in upcoming releases. The goal for each respective phase is to provide a more intuitive way to co-author content and core implementation for multilingual sites.

Released to the public on September 8, 2021, WordPress version 5.8.1 contained three major security fixes, as well as 41 bug fixes on Core and 20 bug fixes for the Block Editor. Because this is a security release and not just a maintenance release, WordPress recommends that users update their sites immediately.

We can expect this version to be widely adopted so that users’ WordPress websites keep running smoothly on the front and back end. We can also expect those who are using outdated versions of WordPress to be more vulnerable to infections.

Back in 2017, Divi began offering website packs, which include multiple pre-designed layouts that are designed with the same theme or business niche so users can create a website with a consistent look and feel on every page. Elementor followed suit in 2019, and began releasing template kits. In 2020, Envato launched a massive library of template kits for Elementor, and plans to do so for the Gutenberg editor. 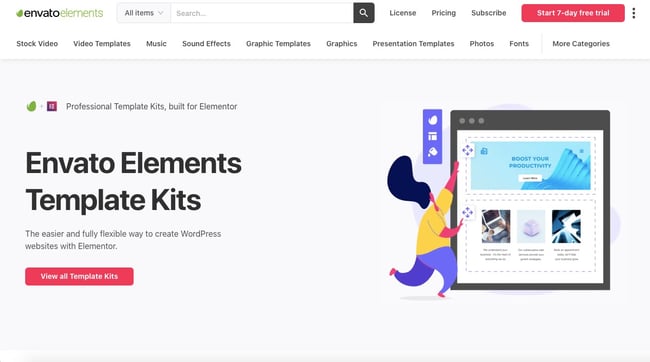 We can expect to see more theme marketplaces and developers offering template kits — and users opting for template kits —instead of themes in the future.

During his keynote address at the State of the Word 2020, Matt Mullenweg emphasized that ecommerce was a megatrend that helped drive WordPress’s growth. In turn, WooCommerce helped increase business's revenue at an unprecedented rate. In fact, Mullenweg said that by December 2020, WooCommerce had facilitated over $20 billion in sales, over double that of last year. He also mentioned a specific WooCommerce site, Tonal, whose revenue multiplied 12 times from 2019 to 2020.

We can expect to see a continued increase in the number of WooCommerce sites created — but maybe not quite at the same rate. Here’s a chart showing a plateau in WooCommerce usage since 2020: 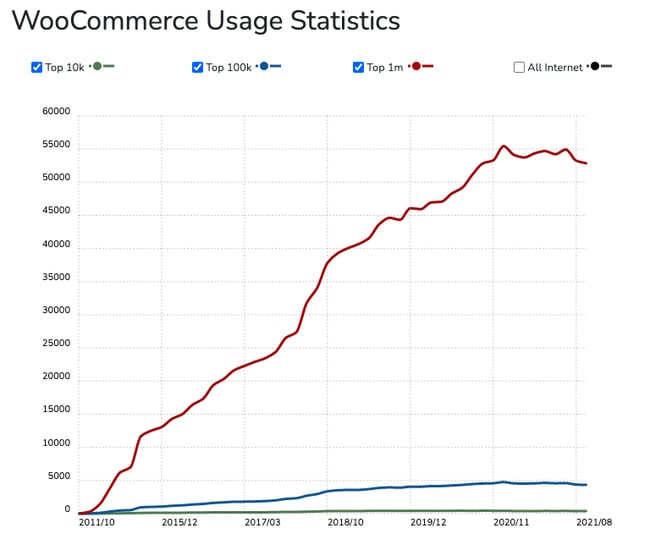 Released to the public in December 2020, WordPress 5.6 “Simone” had a few accessibility improvements. The biggest improvement was the ability to add captions and subtitles to videos using the Web Video Text Tracks Format (WebVTT) in the Gutenberg video block. It also included the default Twenty Twenty-One theme, which conformed to the WordPress accessibility-ready guidelines and addressed several WCAG level AAA standards.

We hope to see more accessibility improvements in upcoming releases of the WordPress core software.

WordPress has a new Performance Team, which includes contributors from Google and Yoast, that is aligned around a mission to improve WordPress performance in all areas, including plugins and themes. This team identified 19 areas of focus, including images, JavaScript, CSS, web fonts, Bootstrap, and more. Of those 19, they narrowed it down to four focus areas and created dedicated working groups for each during their kickoff meeting on November 2, 2021.

As a result, we can expect advancements, new features, updates, and more in the following areas:

The Future of WordPress

WordPress has dramatically evolved since its release in 2003. In the upcoming year, innovations in the core software, Gutenberg editor, and more will continue to impact the WordPress community and CMS market as a whole.

What Are WordPress Blocks? [+Tips on How to Use Them from WCEU 2022 Speakers]