Editor's Note: Since this post was originally published, we're no longer noticing a difference between scheduling/publishing content directly via Facebook vs. through a third-party tool. Our social media team uses HubSpot's Social Media tools, and it doesn't appear to be affecting the performance of our Facebook content. -- 6/12/13

Many social media marketers schedule content for Facebook through third-party software tools from many different companies (including the HubSpot social media publisher). 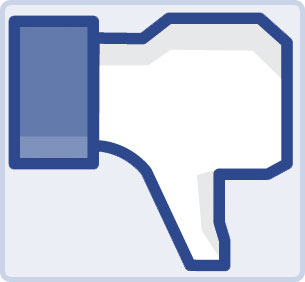 Our work days are spent monitoring and responding to our social media communities and strategizing how to optimize our business pages, generate leads, and grow reach -- manually uploading all our content daily would be far too time-consuming.

But with Timeline rolled out to brand pages, that process is being threatened. Severely. After switching to the new brand page design the minute it became available, the HubSpot social media team instantly noticed how our likes, shares, and comments -- in other words, our overall engagement -- tanked.

Then something magical happened. We noticed that anything we posted manually was suddenly receiving the same attention it did pre-Timeline. So the HubSpot social media lead generation team -- Rebecca Corliss, Kendal Peiguss, and myself -- decided to run a two-week test to compare content published through third-party software tools versus content published manually on Facebook.

We first published content to our Facebook page via two different third-party software tools (one was the HubSpot social media publishing tool, and the other was a very popular tool from a different company). An hour after a post was published, we documented the number of likes and clicks the content generated. Then we deleted the post and reposted it manually from our Facebook page. After an hour, we once more recorded the number of likes and clicks. We did this four times a day for two weeks. After the two-week period, we ran the numbers and found two key results.

Note: The results of our study do not indicate whether Timeline itself was the direct cause of the decrease in engagement. However, the sharp decline occurred simultaneously with the drop, raising the potential of the two being correlated. 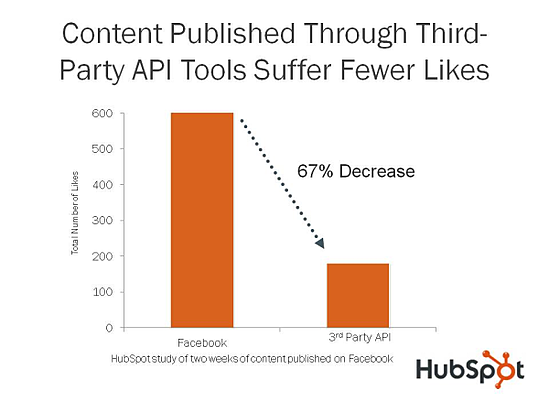 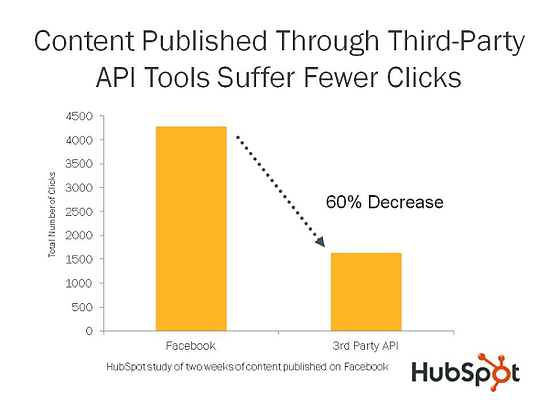 Last November, EdgeRank Checker decided to investigate the rumor that Facebook penalizes third-party APIs. According to its findings, "When an object is created in Facebook, it is assigned a weight. We believe that Facebook strategically reduced the weight of objects created through the API. The reason behind this strategy would be to encourage more content creation within the Facebook platform. This ultimately increases the value of their platform while increasing ad impressions."

But then in December, EdgeRank Checker announced that the problem was fixed. But it seems the issue has resurfaced. Our team hypothesizes that once more, the weight of content published from a third-party API is being decreased before it even has a chance to create organic weight. Regardless of whether this was Facebook's intention or not, it's hurting marketers who depend on third-party APIs. Some component of the algorithm may have been lost in transition to Timeline, resulting in such drastic differences in attention as presented above.

Timeline Is Good for Big Business, Bad for Small

According to a Simply Measured study featured on Mashable, Facebook Timeline is providing a 46% increase in engagement. The study drew results from 15 brand pages such as Livestrong, Toyota, Coco-Cola -- you know, pretty big brands. How are these companies seeing such high engagement rates when our data shows that Timeline is hurting marketers?

Because big brands have big budgets. They can afford to hire employees whose job is to focus solely on social media content, including manually publishing on their actual Facebook pages. Scanning through the business pages included in the aforementioned study, none show any indication that their content was published through a third-party API. Third-party APIs show that the content was published from their tool by adding a source tag, like the one seen below from HubSpot's Facebook page. 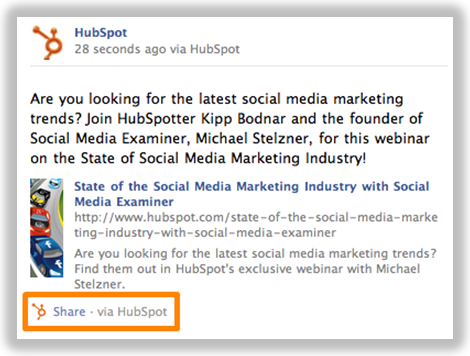 It seems that these big brands have dedicated staff that publishes their posts right from the Facebook platform. Problem is, small businesses don't have the money to fund that. Many, including us, count on software tools from many different companies (like HubSpot and dozens of others) to schedule our content for a full week to allow us to monitor and strategize throughout the week.

The study also doesn't show the difference between "pinned" content or content highlighted as a "milestone" -- both new features of the Facebook Timeline. These features can help increase the visibility of the post by pinning it to the top of your page or expanding its size on your page by making it a milestone.

Unfortunately, to reap the full benefits of Facebook with Timeline now rolled out to all business pages, it appears marketers will have to manually update their pages every day. It's plausible that third-party APIs have been suffering prior to Timeline, and without data pre-Timeline, our study cannot definitively say that Timeline is the root cause. But it appears that something occurred when Timeline rolled out that somehow de-prioritized content published through third-party APIs.

Until Facebook addresses this issue and fixes the part of its algorithm that penalizes third-party API tools, the Facebook platform is the only location to publish from to ensure your content is garnering the visibility it deserves. Hopefully the Facebook team remedies this soon so we social media marketers can use our time for more impactful social media strategizing. Until then, bid adieu to scheduled content.

Note: We believe this change in Facebook is affecting all third party tools equally (we tested HubSpot and another popular tool and the performance was similar between the two tools, but posting to Facebook manually was very different).

Do you use third-party APIs to publish your content? Have you noticed any changes, positive or negative, to your Facebook presence ever since you began using Timeline?