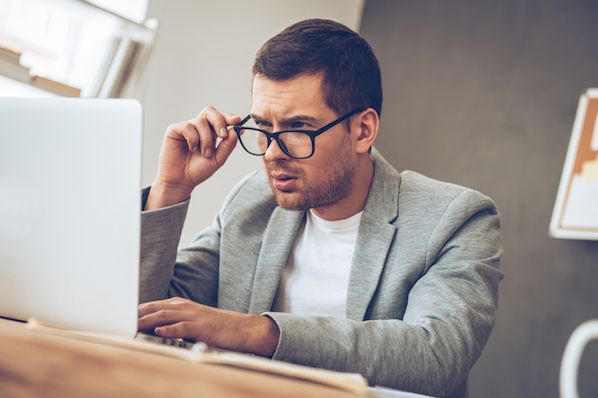 Any online content creator knows: Writing for the web is no easy feat. In fact, one of the most frustrating challenges we face is due to the fact that new, web-related words are being coined all the time. As a result, we often run into questions like, "Do I capitalize this? Is this one word or two? Should I hyphenate it?"

And while there are a number of different established style guides out there to help answer your writing style-related questions, the problem is, none of them have really done a good job of addressing all those commonly troublesome words marketing publishers and other content creators struggle with regularly, many of which have sprouted up in our writing very recently because of the fast-paced world of the internet.

Well, pull your hair out no longer -- we've got you covered! We've published a brand new Internet Marketing Written Style Guide, meant for helping the modern-day marketer and online content creator figure out just how to write for the web. And yes, the style guide even includes a full section devoted to all those troublesome words we find content creators tripping over all the time, which we'll highlight in this very blog post. And if you're interested in learning more about writing for the web, go ahead and download the complete Internet Marketing Written Style Guide, adapted from HubSpot's own house style guide and covering everything from punctuation, to capitalization, to attribution, and how you can go about creating a house style guide of your very own.

app: Short form of application. Plural: apps. Do not use if there’s any room for confusion.

A/B test: Also called split testing; at HubSpot, we use A/B testing and write it with the slash.

BA: Abbreviation for bachelor of arts. No periods.

beta: Capitalize beta if it is part of an official product name. Otherwise, lowercase it. (Examples: Sign up for the new Yahoo! Messenger beta. Try the beta version of Yahoo! Messenger.)

checkin (n.) check-in (adj.), check in (v.): One word when used as a noun or an adjective. Two words when used as a verb (usually refers to the social network Foursquare).

cell phone (n., adj.): Two words, no hyphen. (Examples: He left the message on my cell phone. Type in your cell phone number.)

do’s and don’ts: Note the apostrophes. This is actually proper AP style. However, it will always cause the editors in your readership to have blinding migraines and send you hate mail, so try to avoid using this construction if at all possible.

e.g.: Abbreviation meaning for example. Note periods. Don’t include a space after the first period. OK to use when space is a consideration; otherwise, use for example, for instance, or such as. If used, always include a comma after the last period. See also “i.e.” and “ex.” as
each of these has different meanings and are not interchangeable. [Example: Enter a search term (e.g., recipes, horoscopes, gifts) into the box.]

ebook: All lowercase (in titles/headlines and at the beginning of sentences, capitalize the “e”
but not the “b”).

ecommerce: All lowercase (in titles/headlines and at the beginning of sentences, capitalize the “e” but not the “c”).

email (n., adj., v.): One word, no hyphen. Plural: email messages and emails are both acceptable.

geotagging (n.), geotag (v.): One word. The verb means to add geographic data (such as longitude and latitude coordinates) to a photo or other media file.

Google: According to Google guidelines, it is not okay to use this trademark as a verb. Use
search, search for, or search on instead.

keyword, key word (n.): One word when referring to terms that are used on a web page to optimize it for search engines. Use two words in other cases — for example, when key is a synonym for primary or most important. (Examples: An SEO specialist can help you determine the best keywords to use on your web page. She heard little else that he said; the key word in the sentence was “love.”)

LinkedIn: “L” and “I” are capitalized.

login (n., adj.); log in, log in to (v.): One word when used as a noun or an adjective. Two words when used as a verb, which may be followed by the preposition to. Note that sign in is preferred because it sounds less technical.

mashup (n., adj.), mash up (v.): One word when used as a noun or an adjective. Two words when used as a verb. (Examples: Anyone can create a mashup with the right technology. Use our tool to mash up RSS feeds into a single view.)

MBA: Abbreviation for master of business arts. No periods.

news release: Use instead of "press release” whenever possible.

OK (n., v., adv.): To be used interchangeably with okay. Do not use variations such as Ok and o.k., which are incorrect.

opt-in (n., adj.), opt in (v.): Hyphenated as a noun or an adjective. Two words as a verb. (Examples: The opt-in has been disabled. To receive electronic statements, you must opt in.)

page view: Two words. The viewing of a web page by one visitor. (Example: Advertisers consider how many page views a site receives when deciding where and how to advertise.)

plugin (n., adj.), plug in (v.): One word when used as a noun or adjective. Two words when used as a verb. (Examples: She needed to plug in her laptop to charge it. She downloaded a plugin for her web browser.)

pop-up (n., adj.), pop up (v.): Note hyphen when used as a noun or adjective. Not popup.
Two words when used as a verb. (Example: Get rid of pop-ups before they pop up. Stop pop-up ads from ever annoying you again.)

RSS: Acronym for Really Simple Syndication. All capitals. Abbreviation is always acceptable, but avoid using RSS on its own, since few people know what it means. Use news feed, RSS news feed, or RSS reader as appropriate.

sign-in (n., adj.); sign in, sign in to (v.): As a noun or an adjective, it’s hyphenated. As a verb, it’s two words, which may be followed by the preposition to. (Examples: All visitors must sign in on the sign-in page. Visitors can sign in to Yahoo! Mail automatically. Choose your preferences for sign-in and security.)

sign-out (n., adj.); sign out, sign out of (v.): As a noun or an adjective, it’s hyphenated. As a verb, it’s two words, which may be followed by the preposition of.

since: Not a synonym for “because.” Can be confused with the sense of “over the time that has passed” rather than “as a result of.” Use because instead of since when possible. Also applies to “due to” and “owing to” and “due to the fact that” and other, needlessly wordy ways of saying because.

social CRM: The word “social” here is lowercase. Abbreviation for social customer relationship
management, usually in regard to software platforms.

spam (n., adj., v.): Lowercase when referring to unsolicited email or the act of sending such email.

text (n., v.): Short form of text message. Plural: texts. Other forms: texted, texting. (Examples: Did you get my text? Don’t text while driving. She was texting during the lecture.

U.S. (n., adj.): Abbreviation for United States. Note periods, no space. Not US or U. S. The single exception is specifying currency in prices; in this case, do not include the periods. US $299.

voicemail: One word, lowercase, not hyphenated. Not voice mail.

word-of-mouth (n., adj.): Note hyphens when used as a noun or adjective.

What other commonly troublesome words would you add to this list?