7 Reasons Your Brand Will Never Be as Awesome as Apple 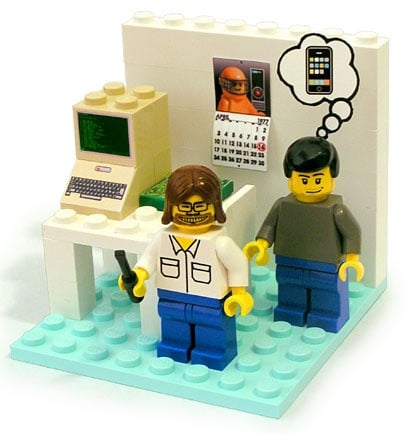 The world’s most valuable and most admired brand has given a lot of businesses a wicked bad case of Apply Envy. With over $100 billion in annual revenues and a 66% increase in net sales last year, it’s hard for even die-hard PC loyalists not to drool over Apple’s ability to rake in 50% of worldwide cell phone profits while commanding only 4% of unit sales.

The bad news is that for most businesses -- and that probably includes yours -- “pulling an Apple” is about as likely as winning the Mega Millions jackpot. Here's why most businesses fail to create a brand as spectacular as Apple ... and how you can make your brand the exception to that rule.

Note: All opinions -- positive or negative -- about the new iPhone 5 and Apple Maps (affectionaly known as "Mapples") have been withheld in this post. Because I think we can all agree that regardless of how you feel about these new releases, Apple is a pretty rock-solid brand.

That sounds a little harsh. Let me rephrase: Your product might kinda sorta stink. (Better?)

Seriously, though. Is your product or service truly the best that it could be? Are you relentlessly committed to quality, innovation, design, and simplicity the way that Apple is?

The most valuable, most admired brand in the world doesn’t think so. If you aspire to be like Apple, start with a commitment to producing the very best product or service that you can imagine. Don’t settle, don’t compromise, and for Steve’s sake, please, don’t phone it in. Pun intended.

2) You Don’t Care Enough About Your Customers

No wonder Apple stores pull in 18,000 visitors (on average) per week and rake in more than $5000/square foot (6x-10x more than other successful retailers!).

If you’re serious about elevating your brand to Apple status, you might want to take a page from their training manual:

If every business on the planet adopted this sort of customer-focused strategy, I’m pretty sure we’d have world peace.

One of Apple’s most notable calling cards is their unflappable design aesthetic. Their products, stores, website, ads, packaging, merchandise -- even their operating system -- is many degrees more beautiful than the “average.”

The question is: is yours?

If you’re not dedicating substantial calories/talent to designing a product that not only works really well, but also meets customer needs -- and is beautiful -- then you’re missing an Apple-esque opportunity to pull ahead of your competitors.

In 1997, Steve Jobs sat down at Apple’s developer conference, took questions from the audience, and famously said, “Deciding what not to do is as important as deciding what to do.”

Shortly thereafter, Jobs went on to reduce Apple’s product range from about 40 to just 4.

That sort of focus -- while difficult to practice -- is critical to putting the “awe” into “awesome” the way that Apple has. It requires immense discipline as well as great clarity and reverence for the end-user. It demands that you forgo shiny new objects, hot trends, competitive challenges, and your innate desire to spread the seed of success as far and wide as possible.

Think of it as The Religion of “Less is More.”

The lesson here? Your brand will never be as awesome as Apple’s until and unless you learn to focus on what matters to the people you serve, above all else.

Let’s pause for a moment and admit one thing: It’s just as easy to criticize Apple as it is to envy them.

For starters, they’re litigious as all get out. They charge 2-3x more for their products than every competitor. They are notoriously absent from social media (outside of the voluminous Fan Boy rants and raves that litter every social network from here to Jupiter). Oh, and let’s not forget Steve Jobs’ reputation for being an eccentric, impatient control freak.

But the man had cohones.

Jobs was a man willing, perhaps even driven, to take risks. Big risks. Not because he was a thrill-seeker, but because he had an insatiable desire to make things better and an unflappable trust in his own intuition.

“Intuition is a very powerful thing, more powerful than intellect, in my opinion. That's had a big impact on my work."

From the iconic “Think Different” ad campaign to the Genius Bar to iTunes to the iPad, Apple has been at the forefront of reinventing not only devices, but entire industries.

That takes, "a pair," so to speak. When’s the last time you challenged the status quo? Zigged when everyone else in your industry was zagging? Or decided to tell “Best Practices” to go take a long, cold hike off a steep cliff?

Consider this a really good time to ask yourself: “What would Steve do?”

6) You Break Your Promises

Ultimately, a brand is nothing more than a promise. A measure of trust. A way for the average consumer to navigate the infinite choices littering today’s oversaturated marketplace, and arrive at a decision that -- contrary to what most of wish to admit -- is 10% logic and 90% emotion.

Apple’s brand promises that through their products, your individuality will triumph. Your iPhone/iPad/iPod will set you free. Apple promises that when you purchase an i-Device, you will become part of a community of forward-thinking independents that refuse to be held back by The Man. You’ll be one of those Creative Types.

Your choice of a Mac over a PC will prove that you’re more conscious of design and perhaps even more evolved than that dude with the Dell down the hall. You will pay a premium for this privilege, but it will be worth it. Because you trust Apple to deliver on their promises.

When Steve Jobs proclaimed the iPhone "a revolutionary and magical product" he was, in fact, telling the truth. Think about it. Since the launch of the iPhone, every new phone that arrives on the market looks like an iPhone and comes with an app store. Or at least tries to.

Is your brand living up to its promise? If it’s not, then it's time to fix it.

In the late 1990s, Microsoft seemed like an unstoppable force, catapulting past giants like Coca-Cola and GE to become the world's most valuable company, and the first to exceed a $500 billion market cap.

But as Henry Ford once said, “A business that makes nothing but money is a poor business,” and a quick glance at the 10-year stock prices of Microsoft versus Apple proves just how true that statement is.

What’s so different about these two companies?

Does your company have a clear and compelling reason for why it does what it does? Is that reason apparent to all, including employees, customers, and even competitors? For Apple, the answer to that question is a resounding, “Hell, yes.”

So you see, it’s not just an iconic logo or sexy packaging that has made Apple the most valuable -- and most envied -- brand on the planet. It’s a powerful combination of 1) an awesome product, 2) true dedication to customers, 3) a passion for design, 4) extreme focus, 5) the courage to re-invent everything, 6) consistent delivery on its core promise, and 7) a very clear and compelling answer to the question “WHY?”

If you can whip up something similar, well, perhaps we’ll see your company at the top of next year’s Most Valuable Brands list. Good luck!

What do you think takes a brand from ordinary to remarkable? What brands do you think have attained Apple-level status?

Why P2P Marketing Might Be a Good Alternative to Influencer Marketing

How to Identify Your Core Marketing Message