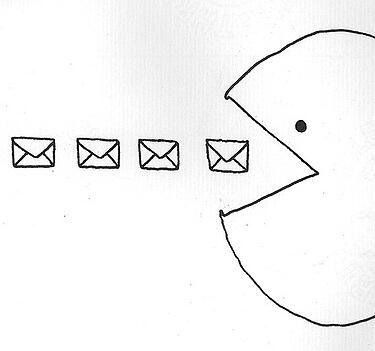 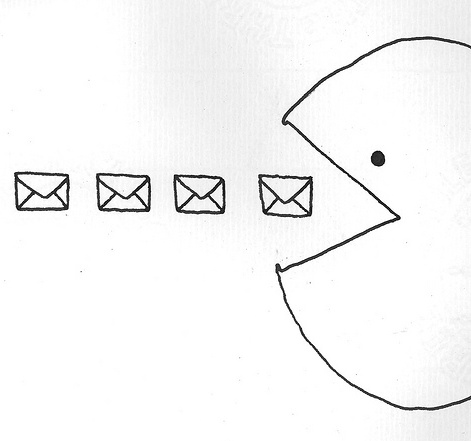 Contrary to rumor, email is not dead. Nor is it dying in the wake of social media's rise in popularity. According to our 20 Marketing Trends & Predictions for 2013, email will live on longer than you might think.

Because email is alive and kicking, email marketing is still an incredibly important channel for most businesses. But while email is here to stay, it is also rapidly evolving. The way email is consumed and delivered is not what is used to be, and that means marketers must adapt to meet the demands of finicky subscribers and internet service providers.

To give you a sense of the current state of email, below are 50 facts about the changing world of email marketing. The data is divided up into four categories: email performance, subject lines, email behavior, and deliverability and devices. 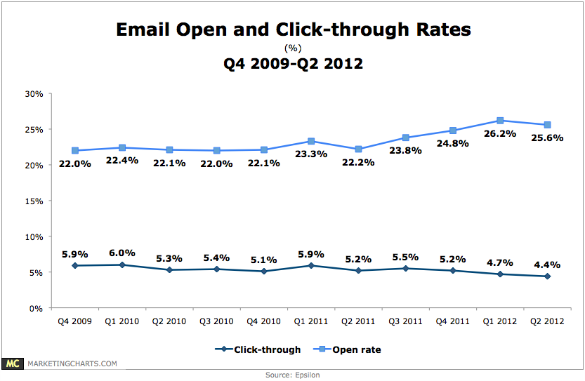 2) 59% of new subscribers (who have subscribed within 3 months, and who represent 11% of an email list on average) are not engaged, neither opening nor clicking on emails. (Source: Epsilon) Tweet This Stat

4) Average email volume per business was down 6.3% quarter over quarter in 2012 and 29.7% year over year (not factoring in triggered email sends). (Source: Epsilon) Tweet This Stat

7) The average clickthrough rate for triggered emails is more than double the rate for mass emails. (Source: Epsilon) Tweet This Stat

9) Roughly half of an email list will be active – either opening or clicking on emails. (Source: Epsilon) Tweet This Stat

11) “Mature” subscribers represent members who have been on a list for longer than 3 months. Among these, 51% have engaged in some way in the past 12 months, including 26% who have either opened or clicked recently. (Source: Epsilon) Tweet This Stat 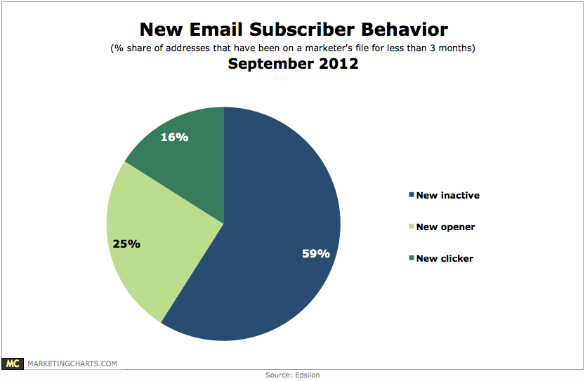 12) The retail apparel industry has the highest proportion of active members (39% opened or clicked an email within 3 months), followed by the business publishing/media general (34%), travel/hospitality travel services (31%), and retail general (30%) segments. (Source: Epsilon) Tweet This Stat 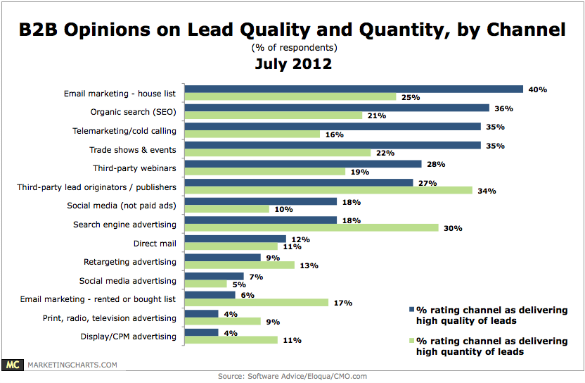 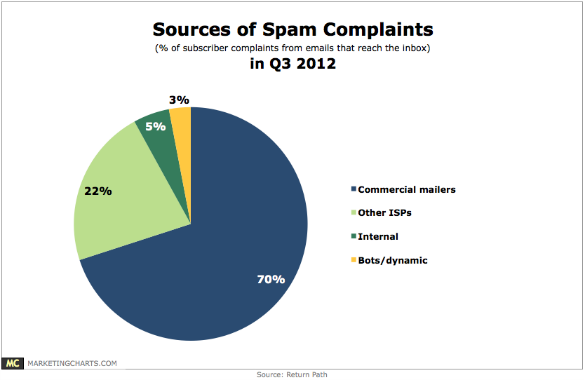 25) “Latest” was the only benefit-related term to see above average clicks (8.8%) and click-to-opens (9%), while “special,” “exclusive,” and “innovate” -- while performing about average in opens -- fared far more poorly in clicks and click-to-opens. (Source: Adestra July 2012 Report) Tweet This Stat

26) Personalized subject lines are 22.2% more likely to be opened. However, personalized emails had a clickthrough rate 16.5% lower than the average, and a click-to-open rate 31.7% below the average. (Source: Adestra July 2012 Report) Tweet This Stat

29) “Snappy” subject lines of 1-2 words easily performed best in each of the metrics, while those with more than 14 words also performed above average. All other word count groups skewed closely to the average. (Source: Adestra July 2012 Report) Tweet This Stat

31) 64% of people say they open an email because of the subject line. (Source: Chadwick Martin Bailey) Tweet This Stat 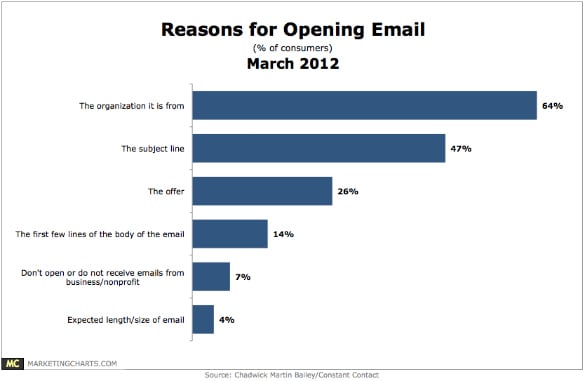 32) 61% of people state that "not being interested in an email" was the most common reason for not opening an email, followed by "getting too many emails" (45%). (Source: Chadwick Martin Bailey, 2012) Tweet This Stat

33) 25% of people complain they dislike all the marketing clutter they get, yet 40% claimed to enjoy getting lots of marketing emails from favorite brands and deal services each week. (Source: 2012 Blue Kangaroo Survey on Marketing Emails) Tweet This Stat 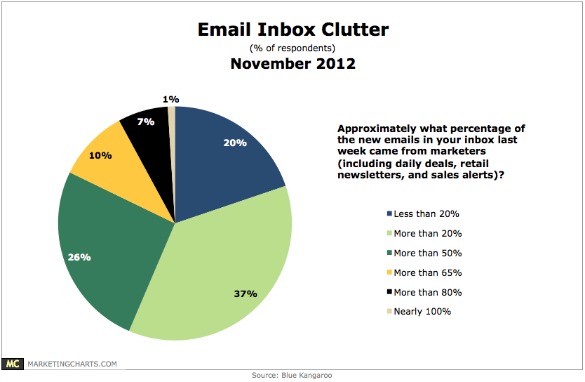 34) 6 in 10 people spend half an hour or less per week opening and browsing marketing emails. 1 in 5 people spend an hour or more doing so. (Source: 2012 Blue Kangaroo Survey on Marketing Emails) Tweet This Stat

35) 8 in 10 people say the marketing emails they receive go mainly into their primary personal email account, displayed alongside their personal emails. Just 8% have a separate account specifically for receiving marketing emails.(Source: 2012 Blue Kangaroo Survey on Marketing Emails) Tweet This Stat 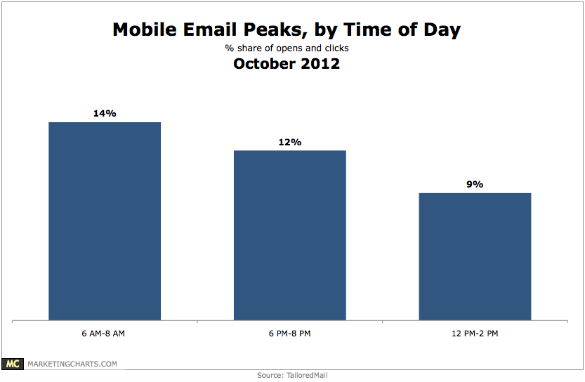 37) 7 in 10 people say they had made use of a coupon or discount they had learned about through a marketing email in the prior week (35%) or month (33%). (Source: 2012 Blue Kangaroo Survey on Marketing Emails) Tweet This Stat

38) 69% of subscribers say that too many emails is the number reason they unsubscribe from email. (Source: Chadwick Martin Bailey, 2012) Tweet This Stat

39) 58% people say receiving discounts and special offers was the top reason for subscribing to emails from businesses or non-profits. (Source: Chadwick Martin Bailey, 2012) Tweet This Stat 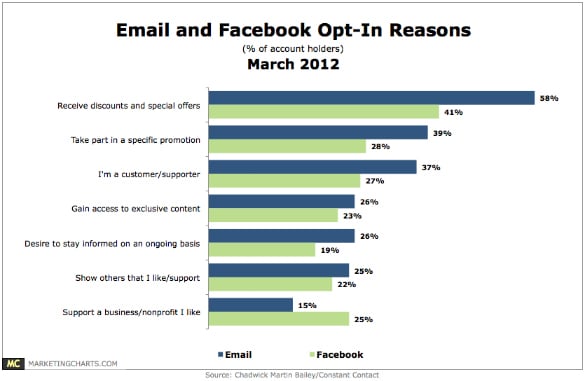 41) Europe has the highest inbox placement at 84%, but it too was down about 5% year over year. (Source: Return Path’s Email Intelligence Report for Q3 2012) Tweet This Stat

42) 84% of respondents use desktops or laptops to access email; however, two-thirds of those under 30 use their smartphones or cell phones to access their email. (Source: Chadwick Martin Bailey, 2012) Tweet This Stat

45) 52% of companies let people sign up for email or text alerts about products and offers as a path to purchase in mobile. (Source: Chief Marketer 2012 Mobile Marketing Survey) Tweet This Stat

47) 24% of companies use email and non-mobile signups as a metric to gauge mobile marketing success.(Source: Chief Marketer 2012 Mobile Marketing Survey) Tweet This Stat

48) 48% of marketers don’t know what percentage of their emails are read via a mobile device. (Source: eConsultancy 2012 Email Marketing Industry Census) Tweet This Stat

50) Despite the fact that 13% of execs are now primarily checking their email via a mobile device, less than half of websites/emails are optimized for customers to view or respond to via handheld resources. (Source: MarketingSherpa 2012 Email Benchmark Report) Tweet This Stat