12 Epic Marketing Fails That Made the World Cringe [Slideshow] 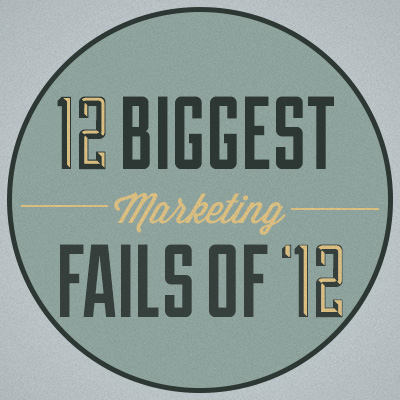 We humans have developed somewhat of a taste for watching others struggle. Don’t believe me? Consider the prevalence of internet entertainment based solely on the epic #fail --  stumbles, slips, falls, and general public embarrassment get little sympathy from our side of the monitor.

Big brand marketing decisions, too, are apt to display similar lapses in logic or grace. I’m not here to make you feel guilty about taking joy in such matters (as I’ve had my fair share of laughs, too), but I’m here to make some sense of why we relish failure and, better yet, how we can use it for good in our own marketing. Because even if you’re good at hiding your own failures (be honest, we all trip up), mistakes are a great reminder that we’re only human.

For those of us witnessing these faux pas, let's strive to be 1) understanding and 2) learn how we can avoid similar slip ups in our own marketing. So, here are the 12 biggest marketing fails of 2012. Time to learn from these doozies!

1) Nokia Uses Another Camera to Show Off its OIS Technology

Why it Failed: The idea here was for Nokia to demonstrate their new product's amazing optical image stabilization capabilities. Except that they show a video using a professional camera, and tried to pass it off as their new OIS technology. A product marketer should be communicating a product's value through its features. If your product's features don't align with the value you're marketing, however, it makes you look like a liar, and your product appear subpar. Don't pull the wool over consumers' eyes -- be honest and confident about your product's capabilities.

Facebook's post-IPO share price plunged from $38 to around the mid-$20's, far lower than so much hype would have made most people anticipate. Not to mention investors saw a huge loss, too. The lesson here is that if there's going to be a ton of hype around something your company does -- whether it's self-generated hype or external -- you better live up to it whenever that event actually takes place.

Why it Failed: Unfortunately, we've all seen this faux pas far too many times. Social media is ubiquitous, for both personal and business uses. So it makes sense that a personal tweet might come through when a social media manager thinks they're tweeting for their personal account, but actually send it out through their business account. But you know what? We have to pay closer attention to detail to alleviate this problem. And on top of that, we can prevent epic fails like this by making sure whatever it is we tweet, it's something no one will be offended by, whether it's personal or business.

Why it Failed: Belvedere's ad crossed the line by a longshot. In fact, I am truly shocked that this ad ever even made it past phase one of creative. While Belvedere made a donation to RAINN, an anti-sexual violence organization, after this mega-mistake, it still speaks to a larger judgment error that deviates from their typically clever, engaging social graphics. Because there's really never a time a joke about sexual violence is a good idea in your marketing campaigns.

Why it Failed: The #McDstories hashtag gave naysayers a huge opportunity for critique. And when you're a brand like McDonalds, with 1) a huge following, 2) global knowledge of who you are, and 3) a ton of historical controversy over product quality (not to mention the comic opportunities that abound around the fast-food industry), this hashtag was just too general to prevent the subsequent firestorm. With a reach so large, even a small number of detractors mean a ton of negative internet coverage, which is what McDonalds saw with this hashtag that highlighted people's terrible experiences with McDonalds.

Why it Failed: Last year, Susan G. Komen pulled funding from Planned Parenthood because they were under congressional investigation. That, understandably, befuddled people who saw Susan G. Koman as an organization that supports women's health, just like Planned Parenthood -- who, incidentally, provides breast cancer screenings for women at their facilities. They angered people even more when Facebook comments about the incident were deleted, instead of addressed. Komen adjusted their policy to target those only under criminal investigation going forward, but the fact that they so quickly withdrew support for an organization that supports their mission and the mission of their target market did not sit well with the public.

7) Bing Learns Not Every Company Can Be a Verb

Why it Failed: You know how when you perform a Google search, you just say you're "Googling" something? Microsoft tried to do the same thing, turning "Bing" into a verb. Needless to say, it didn't take off. To make it worse, they wouldn't drop the fact that their campaign was a bust, and rationalized their failed efforts at marketing. Ultimately, they closed it out by saying they don't really care if people use "Bing" as a verb, as long as they use Bing as a search engine. But this campaign stunk of a sub-bar, unoriginal copycat campaign of a competitor.

Why it Failed: Some of you might remember the uproar around "Mapples," or the Apple maps iPhone users were using instead of their favorite (and functional) Google maps. The problem peaked when a user, following Apple Map directions to a very small town called Mildura, was led into the middle of Australia's second largest natural park. The climate was, needless to say, not one you'd want to be exposed to without preparation. The moral of the story? Don't force your product upon people, especially if it's not nearly as good to the alternative to which they've become accustomed.

9) Oprah Tweets About the Surface From Her iPad

Why it Failed: While Oprah is a fantastic celebrity to have behind your brand, it's not so fantastic when she's promoting your product -- the Surface -- using a competitor's -- the iPad. With a reach as big as Oprah's you better believe it was called out far and wide, and all this campaign succeeded in doing is giving the iPad more positive coverage. Straight from their competitor.

Why it failed: The overly-obsessed girlfriend is another hilarious viral meme that, wisely, Samsung capitalized on. Unfortunately, they didn't really score any points in the execution. Despite newsjacking the meme for their own ad for their SSD 84O Drive, the ad didn't actually make the leap from meme to device. In other words, nobody knew that the ad was from Samsung, or marketing the SSD 84O Drive. When you're capitalizing on a pop culture phenomena, make sure you end it with some sort of logical tie-in that identified the ad's maker. Most people won't take the time to research it on their own.

We love seeing old-school companies like Buick adopting new-school marketing tactics, like using QR codes. But as we've seen a couple times before in this roundup, there was a problem with execution. Buick launched a print advertisement that featured a QR code ... and had to call-to-action. Uhhh ... what? It's critical you give instructions to content consumers if you expect conversions to take place. Otherwise, they'll just move on to the next cool video, article, meme, whatever, and forget about you in an instant.

You know that trope about men and women? Where women are the awesome mothers and fathers are the fumbling fools? Yeah, it's played out, demeaning, and pretty sexist. Oh, also totally not true. Huggies found this out the hard way, when they launched a campaign poking fun at dads as being, well, fumbling fools that didn't know how to take care of their babies. Consumers, fathers in particularly, didn't take to it. There's a fine line between parody and just plain making fun of people -- and Huggies did not land on the right side of the line with this campaign.

What lessons can you draw from these big brand marketing fails? As a marketer, how would you come back from mistakes like these?

The State of Consumer Trends [Data from 1000+ Consumers]