This is a guest post by Pete Warden , the founder of OpenHeatMap , a free and easy way to turn your spreadsheet into a map.
Nine months after the creation of the service in March 2006, Twitter only had a few thousand users. A year later there were an estimated 150,000 people using the service . How did Twitter get those vital initial users?
To answer that question I created a visual history of Twitter's growth, feeding data from Dharmesh Shah ( developer of TwitterGrader.com ) into OpenHeatMap to produce an animated visualization of the service's growth, along with information on the earliest users for each region. That gave a broad overview of the spread of the network, but I also did some independent research on user numbers in the first few months, and approached some of those early users to discover exactly what made them sign up to the service.
The interactive version is online and embedded above, but for a quick overview here's the end-of-year maps for the last four years: 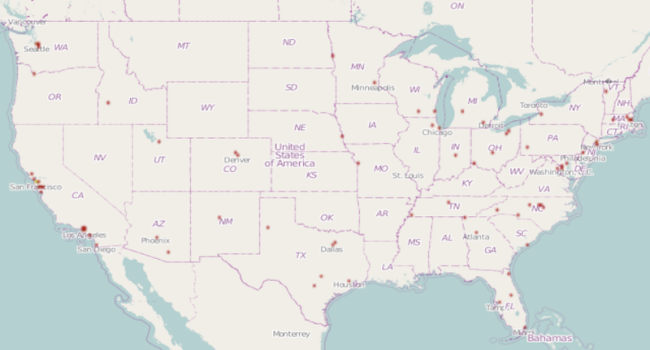 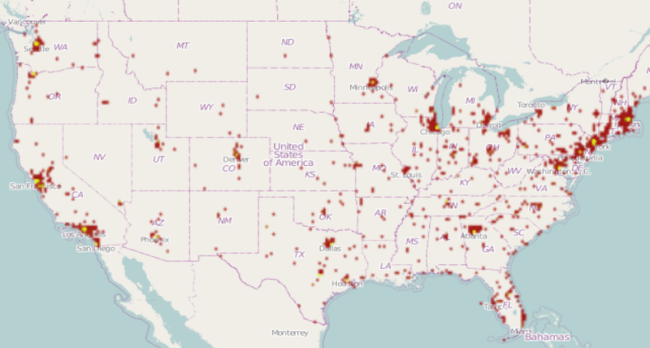 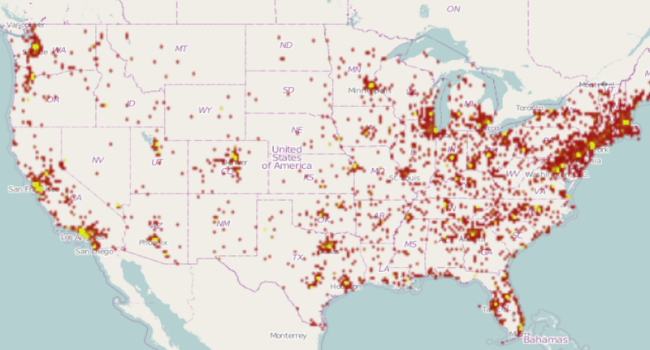 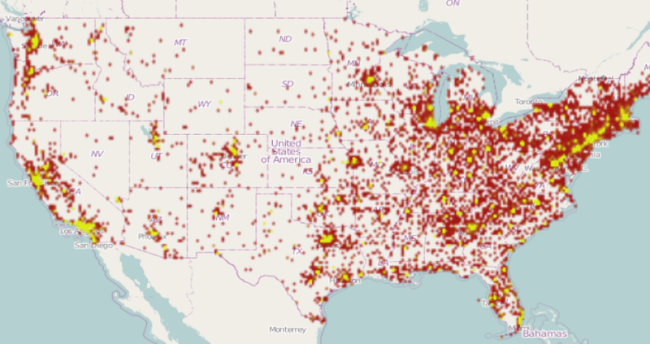 I was expecting to see a wave of adoption spreading out of the tech hubs of the West Coast, but even back in December 2006 I found 121 users in New York, compared to 404 around the mother-ship in San Francisco. There was even a healthy bunch of early-adopters in 'flyover country', with 6 users in Boise, 13 in Salt Lake City and 8 in Kansas City.

Back in the dark days of 2006, Twitter was just another tech startup competing for attention, so how did it pick up those vital first users? Happily, the service initially gave new users sequential id numbers, so @biz was 13, @noah is 14, and so on. This makes it possible to walk through the first few thousand ids in using the API and reconstruct when every person joined, and so how many users there were at any point in time. For the geekily inclined, here's some notes on my methodology and code to help you reproduce my results . This is the day-by-day chart for the initial launch. The first public mention of the service I can find is on Evan William's blog late on July 13th , but you can see that even on the 12th there was a mini-boom in registrations. Then Om Malik's post on the 15th really pushed it over the top, with more than 250 people signing up the next day. What I find fascinating is that there were less than 600 people on the service at that point, so it was a very prescient plug. Encouraging for those of us with our own startups is the flattening of the growth curve after the initial spike from the publicity - it's always painful to go through the come-down after the adrenaline boost of a rush of visitors. What's clear from these monthly charts is that the service truly was viral, even in its early days. As it got more users, they drove more users, giving you the rocketing curve every entrepreneur dreams of. It looks like a service that users loved and shared with their friends, instead of one where traffic is driven by high-profile articles and hype.

I asked some of the earliest adopters how they first found the service and why they started using it.

@billg ran across Om's blog post, was working on some wristwatch technology that was a perfect fit for the 140 character messages and so leapt at the chance to try it out

@neha " learned about twitter very early because I worked at Google when the Blogger guys did ... I absolutely adore new social technologies and pretty much sign up for everything, so I signed up for twitter.  Also, Ev and Biz are interesting guys, and are fun to follow! ... during the first few years it had that select-community feel -- like Orkut when Google first launched it, or FriendFeed.  The people on the site were friends of friends of the creators, and so it was a very SF-centric tech community.  It was very interesting to hear what these people had to say!  High signal to noise ratio "

A recurring theme is the power of that initial publicity in driving the early users, and the feeling that it was a way to connect with an interesting group of people. Evan's high-profile and Om's endorsement must have been a big help in building that sort of buzz.

In March 2007 Twitter won the top award at South-by-Southwest, and that was when the service really started getting attention. I wanted to see how that was reflected in user growth, so I looked at how a few cities changed between December 2006 and March 2007. Austin had a massive growth spurt, from 61 to 402 users in three months, but what's interesting is that almost every other town also went through a similar rise, with Los Angeles going from 88 to 474 twitterers, and Boise jumping from 6 to 30. That roughly five-fold increase over the 3 months was remarkably evenly spread.

The next three months were less explosive, but the pattern was still very consistent across the country. By  June 2007 Austin had 671 users, LA 994 and Boise 53, and most cities had roughly doubled.

Here's a list of the earliest Twitter users we could find for some major US cities. Everyone here joined before February 2007 and the SXSW boom, so they can claim bragging rights as the true pioneers.

We’ve added a new feature to Twitter Grader that shows you a list of the earliest users on twitter  (based on their “Joined Twitter” date).
What have I learned?
What surprised me most was how little geography mattered for adoption . Even in today's world of ubiquitous internet access, I expected that real-life clusters of friends would be the main vectors by which the service would spread. I don't see the sort of city-specific growth spurts I'd expect if that were true, instead the network took root wherever there were people. That has some interesting implications for anyone starting their own service, it looks like focusing on virtual communities instead of physical ones can be very effective.

I'd also never thought of Twitter as an aspirational service, but Neha nailed the atmosphere of the early days. There was an air of exclusivity, of access to an interesting group of Valley rockstars, that gave people a reason to check it out. This feels a lot like the way that Facebook started at Ivy League colleges and then opened up progressively to lower-status groups with the promise of mixing with a 'better class' of people. That might explain why companies like Google have such a hard time launching similar services, catering to the masses they can't pretend they're exclusive, but it bodes well for Quora's approach.

The reality of its rapid adoption all over the country is hard to square with its image as an exclusive Valley club, but maybe that contradiction is the sign of exquisite marketing. Apple gives their users that same sensation of belonging to an elite, even as they sell products in malls across the country. Twitter tapped into people whose dreams were in Silicon Valley, wherever they were in the world.

Finally, one heartening thing for me and any other starving entrepreneur is how eclectic the initial growth was. There were spurts and slowdowns in the beginning, and while it was clearly a success story even at the time, the magnitude of their long-term trajectory wasn't obvious through the noise.
Do you know when you joined Twitter?  You can find out at TweetingSince.com .  What do you think of the data?  What surprised you the most?  What else would you like to see?