Take a moment and think about your career. Think about the success you've achieved. 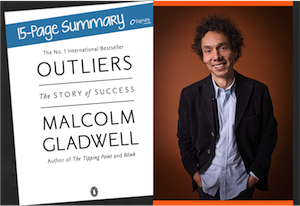 But have you ever stopped to think about the external factors that influence your likelihood to succeed? Did you ever think that the year you were born could indicate how successful you would be? Or your childhood and upbringing could be a factor in how many opportunities are presented to you?

In his bestselling business book, Outliers, Malcolm Gladwell dives into what he calls "the story of success." He dives into the results various studies to figure out what drives success. While the book is 300 pages long, we summarized it into a 15-page summary. Below I extract five key points we shared in the summary in order to provide a high-level understanding of what this book is all about.

If you find yourself longing for more after, grab a copy of the full summary here -- and better yet, your download comes with a 30% discount to hear him speak at INBOUND this Fall!

1) Not everyone is given an equal opportunity.

Gladwell drives home that opportunity knocks for some, but not for others. He points out a few reasons, one of them being birth date.

Gladwell argues that when you were born can influence the type of opportunities presented to you in life. For example in 1935, there were 600,000 fewer babies born than the average, which meant smaller class sizes and a greater chance to get a spot on the top sports teams or colleges. Therefore, according to Gladwell's book, people born in 1935 had a greater chance of getting a good job at one of the better firms.

2) Timing is a critical component of success and opportunity.

Although similar to the previous point, Gladwell emphasizes the effect of timing on opportunity. He expresses how some people have an innate advantage simply because they were born at the right time. One example he shares in his book is how all the top IT entrepreneurs in the Silicon Valley were born between 1953 and 1956.

One of Gladwell's prevailing rules is that it takes 10,000 hours takes to master something. At 40 hours a week, these 10,000 hours translate roughly into 5 years of work -- or in other words, 40 hours per week, every week, for 5 years.

One the cases he used to drive this point in his book is Bill Gates. Gates was born into a wealthy family, went to one of the few colleges that offered coding programs, and (better yet) was able to code for free. Because of these advantages, by the time he was in college, he had hit the 10,000 hour mark. Microsoft was then the by-product of his mastery of programming.

If you feel like there’s a purpose to your work, you’re more likely to work hard, put in the hours, and become a master. One study in Gladwell’s book followed immigrants and their offspring, discovering that the emphasis immigrant parents put on the value and practice of hard work inspired their offspring to find more meaning in their work. As a result, many children from immigrant parents became more successful in mastering their profession.

Gladwell's book also argues that our values are passed down from generation to generation. To illustrate his point, he points to the cultural legacy of several Asian countries where rice was a dominant crop.

Tending rice paddies is a complicated project that requires hard work and grit. To have a successful rice paddy, you have to wake up at dawn and work all day, every day. The success of your rice paddy depends on the amount of hard work and diligence you put into it -- which then created a “cultural legacy” of hard work.

If you enjoyed these five key points, click here to read our full 15-page summary of the book. And as I mentioned above, your download will come with a 30% discount code to hear Malcolm Gladwell's keynote at INBOUND (as well as all the other sessions going on that week). Hope to see you there!