How BuzzFeed Makes Money: An Inside Look at Their Sales Process 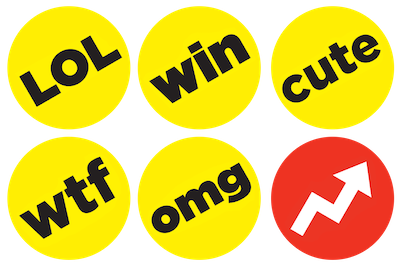 Chances are, you're familiar with BuzzFeed as your go-to workday procrastination. The site has helped you figure out what city you should live in, normalized your struggles as a short/tall/blond/brunette/girl/boy, and alerted you to the latest and greatest viral video.

But behind the playful content that thrives on shares is a serious business that thrives on what all businesses need -- revenue. BuzzFeed's sales team is made of approximately 50 reps nationwide who sell the value of the listicle to companies such as Target, Toyota, Starbucks, Disney, and Unilever day in and day out.

How do they do it? I got on the phone with Blake Boznanski, sales director, to find out. In this Q&A, he talks about why content might be the future of advertising, keeping up with industry trends, and the social selling tactics he swears by.

We've all read, shared, liked, or commented on a BuzzFeed article. But what exactly does BuzzFeed sell?

We sell branded content that [acts as] ads. Our founder Jonah Peretti -- the cofounder of Huffington Post -- had BuzzFeed as kind of a side project initially. When he looked at the business side, he said we’re writing such great content that people are talking about and sharing that we want the advertising to be the same way. No one talks about, clicks on, or really engages with your typical ad, so how do we make it more engaging? It’s so easy to just run a banner, but we felt it would be more compelling to create content. So the content we create for a brand becomes the ad that’s run across BuzzFeed and the social web.

A lot of people are familiar with BuzzFeed from a consumer standpoint, but it’s a little different from an advertising standpoint. Because we’re not doing the standard banner, there’s more of an education aspect -- here’s how we can get people to talk about your brand through word of mouth marketing and get engaged with it. Then we get into the art and science behind what BuzzFeed actually is and does. From the outside it looks simple -- creating great content -- but behind that we have a science about what works.

So we walk through all that information with a client, and once they have sign off, then we start really collaborating with them. We don’t do a big sales push. It’s more of a conversation about content in general, and if they get content, then it’s a perfect play. If they don’t get it and they’re nowhere near starting or wanting to, we’ll take more of a back seat, and say 'Here are things you should do whether it’s on BuzzFeed or not, and once you’re ready to work with us, let’s pick up that conversation again.'

So how do you convey the value of branded content as opposed to more traditional advertising?

I do it a couple of ways. When I talk to somebody who does the traditional online advertising, I ask them, ‘When was the last time you personally clicked on an ad banner?’ It’s usually crickets, so that’s kind of a telltale sign right there. Then I ask, ‘What’s the last advertisement you were so passionate about that you shared with a friend?’ And a lot of times people respond, ‘Well, I don’t really do that.’ That’s where I say, 'That’s what we do -- we want people to not just see an ad but engage with it and share it with their friends and colleagues.'

We also have a very in-depth dashboard that shows the results of the branded content we work on, so we can show how many engagements a [piece] got, and how many times it was shared and from where. Once you see the data, then you can really tell the story because I think people are a little skeptical of content in general. We have a lot of case studies that show that if you create great content people are going to be more likely to want to work with your brand and buy your product.

Does the structure of the sales process have an impact on the type of salespeople BuzzFeed hires?

Absolutely. If someone has done all direct response advertising in the past, that’s a completely different skill set than what we're looking for. That’s not to say that we wouldn’t hire somebody with that background, but it might be harder to transfer into what we’re selling.

We’re more of that consultative, longer sales cycle. There are some brands that you have just one meeting and they’re on board but others are like ‘I kind of get it, but I need to sell this up the chain.’ So it’s a completely different type of sell and salesperson we’re looking at. We want to have somebody that is intellectually curious about what’s going on in the marketplace and how this type of marketing can help your brand. Primarily they’ve been in media sales, but it doesn’t necessarily have to be online media sales -- we’ve hired people who have done print and television. But I think knowing the media industry is [important].

Do you use social selling in your day to day? If so, how?

If there’s a company I’m interested in, I do a ton of research. If it’s a cold email and I don’t have a relationship there, I want to be buttoned up and know about their business, so when they get something from me, they say, ‘Blake has really invested time and has some initial ideas on how BuzzFeed can help us.’ If I find people to reach out to, I’ll look at them on LinkedIn and see where they’ve worked before and if we have any common connections. I used to work at LinkedIn, so it’s a huge sales tool for me. Same thing on Twitter and Facebook if their profile is public, and I’ll also do a Google search to see if their name comes up in the news. I think the more information you go in with, the better conversation you’re going to have. Not knowing anything about the brand, the person, the product -- that’s not going to help you drive business.

And it takes a lot of time to do that. The amount of time I spend researching before I talk to somebody is immense and it’s tough because a lot of times you don’t get a response. [You might think] you wasted time, but, at the end of the day, you didn’t. You’re still very interested in the company, and if they come around eventually you have all this background information. Plus, I’m just curious about industries in general, so I like knowing what’s going on.

What kind of information do you put into cold emails?

Again, it depends on the company. If they’re doing something in the marketplace right now, or if I read they just launched a marketing program, or if I saw one of their execs was on a panel -- it’s really different for each individual. But it’s really doing your homework to find out as much information about the company and the person as possible and then personalizing that message.

Does BuzzFeed have a target customer persona?

We don’t. We work with so many different types of customers -- clients direct, PR agencies, creative agencies, social agencies -- and then within the client there are all sorts of different groups. So we don’t have one standard set of people that we try to go after or typically see. Whatever group is looking to have a conversation with us, we’re happy to talk.

So how do you tailor your message to those different audiences -- PR, creative, social, direct?

The thing is we don’t have a set presentation. When I go into meetings, I don’t even do a presentation anymore -- I just talk to them about what BuzzFeed does in general, and show them some examples of what we’ve done with brands. I think that brings it more to life. So that doesn’t change, but obviously if I’m talking to someone from a PR agency, I may show some examples that we’ve worked directly with PR agencies on. Maybe if they’re in the automotive or food industry, we’ll show examples in regards to those. Also, a PR challenge is going to be different from a social challenge or a creative challenge, so we make sure we’re aligning with what they’re talking about and what we’re offering fits the needs of what they’re trying to do.

A lot of sales today is keeping up with industry trends and helping clients spot problems they don't even know they have. How do you stay up on the media industry?

Any newsletters, any information that’s out there, I’m like a glutton for it. Because the more I know, the more it’s going to help me in the long run.

I get a lot of emails [with updates] in the morning so I can digest what’s going on. If I don’t have time to read them, I have an articles folder that I’ll go back to. And I typically go through them every day at least just to see what’s going on across the brands -- even if it’s someone I’ve never worked with. I just saw Honda Civic is doing a YouTube video that’s basically a splice of two videos -- it’s unbelievable. I always want to be aware of what’s going on in the marketplace so when I have a conversation with somebody it’s not like I just know BuzzFeed and I just know their brand; I know everything that’s happening.