7 Scientifically Proven Ways to Get More Clicks on Your Content 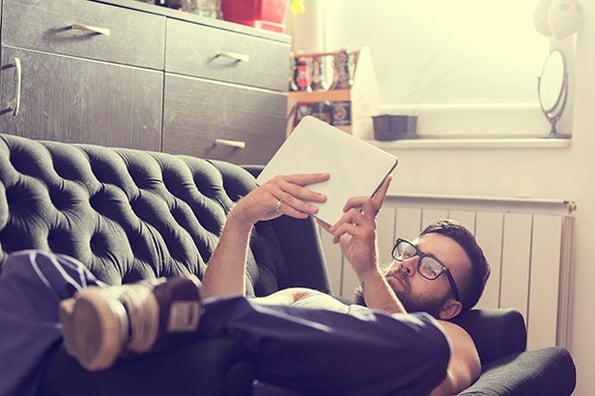 As marketers, before we can create interest and compel action, we must get our audience’s attention.

That’s the job of the headline copy, which can take many forms:

Whatever the context, one fact remains constant: The headline is the most important sentence on the page.

“On average, five times as many people read the headline as read the body copy,” said David Ogilvy, the Father of Advertising. “When you have written your headline, you have spent eighty cents out of your dollar.”

Point being, make your first words good. Make them so good — so relevant and valuable — that they can’t be ignored.

This is the only way to ensure that the rest of your message gets consumed.

How to Make Your First Words Too Good to Ignore

First and foremost, you must know your audience.

If you don’t know what your audience cares about, you can’t start writing for them. You wouldn’t know where to begin.

Before you write, research.

Then, once you know what your audience needs or wants, use any one of these proven tactics to craft an angle that commands their attention:

Humans experience curiosity in a couple ways: perceptually and epistemically.

“Our brain and our mind assigns value to this [new] knowledge,” explains Mario Livio, an astrophysicist and curiosity researcher, “so this is usually experienced as a pleasurable thing, with an anticipation of reward in the form of what we learn.”

This moment of pleasure and delight is what makes “curiosity gap” headlines so compelling and ubiquitous: used across the internet, especially in social media marketing.

Headlines that leverage the curiosity gap are specific enough to connect with the reader, but not so specific that they fulfill the reader’s epistemic curiosity — their desire to learn something new and get that pleasure rush.

If the reader wants that rush, they’ll have to commit their attention.

Note this “curiosity gap” headline from 1987:

It helped Joe Sugarman entice readers through the opening of his “Vision Breakthrough” ad, widely regarded as one of the greatest pieces of direct response ever written.

It went on to sell more than 20 million pairs of BluBlocker sunglasses.

People are hardwired to value things and experiences that they perceive to be rare — or at least in short supply. Psychologists and economists refer to this tendency as the scarcity principle.

It’s an evolutionary trait, developed to ensure that we get what we need. Thousands of years ago, early humans leaned on it for survival. Today, copywriters evoke those same gotta-have-it feelings by using words and phrases like:

The scarcity principle is also tied to our self-worth. Acquiring something uncommon or in demand makes us feel powerful.

“Scarcity creates fashion,” Seth Godin said. “People want something that others can’t have.”

Note this “scarcity principle” headline from 2013: 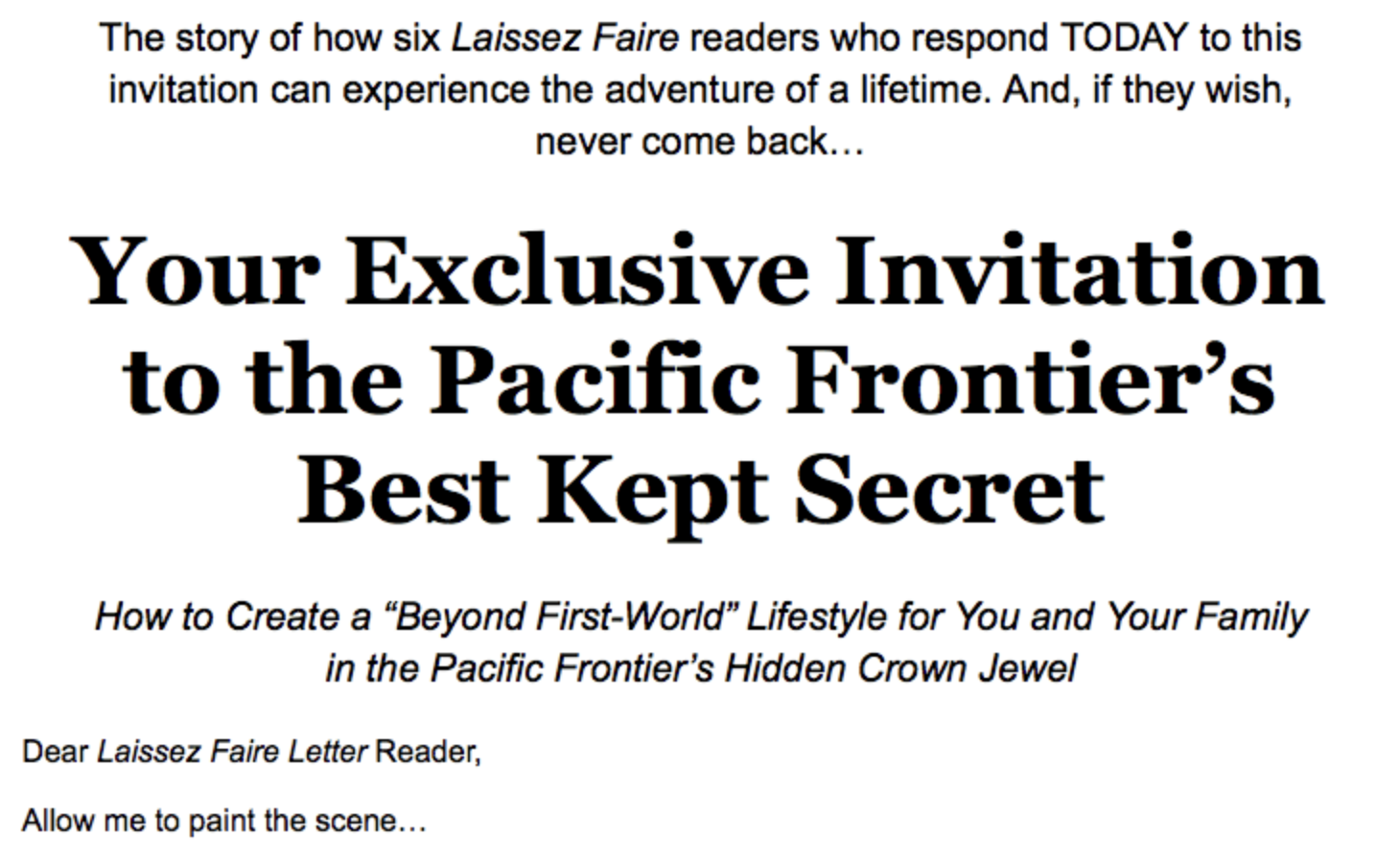 This is the opening of a sales letter from The Agora, a global marketing network known for publishing incredibly effective direct response sales letters.

The headline offers “six” people an “exclusive” invite to “experience the adventure of a lifetime.” The ad ultimately leads into a real-estate investment opportunity in Nicaragua.

The letter sold out in a couple days.

Want to stop scanners in their tracks? Use a number in your headline.

Whether your headline appears in a newsletter, a popup, or a YouTube banner, a number will make it stand out.

Numbers work this way because words and images make up most of the content we see each day. Webpages, magazines, billboards, emails: They’re all dominated by words and images.

So when our eyes spot a number, it sticks out. It pops, focusing our attention. Simple, but effective.

Numbers also signify finality, a definitive beginning and end, which is comforting to readers.

“The more we know about something — including precisely how much time it will consume — the greater the chance we will commit to it,” explains Maria Konnikova, who writes about psychology and science for newyorker.com. “The process is self-reinforcing: we recall with pleasure that we were able to complete the task (of reading the article) instead of leaving it undone and that satisfaction, in turn, makes us more likely to click on lists again.” 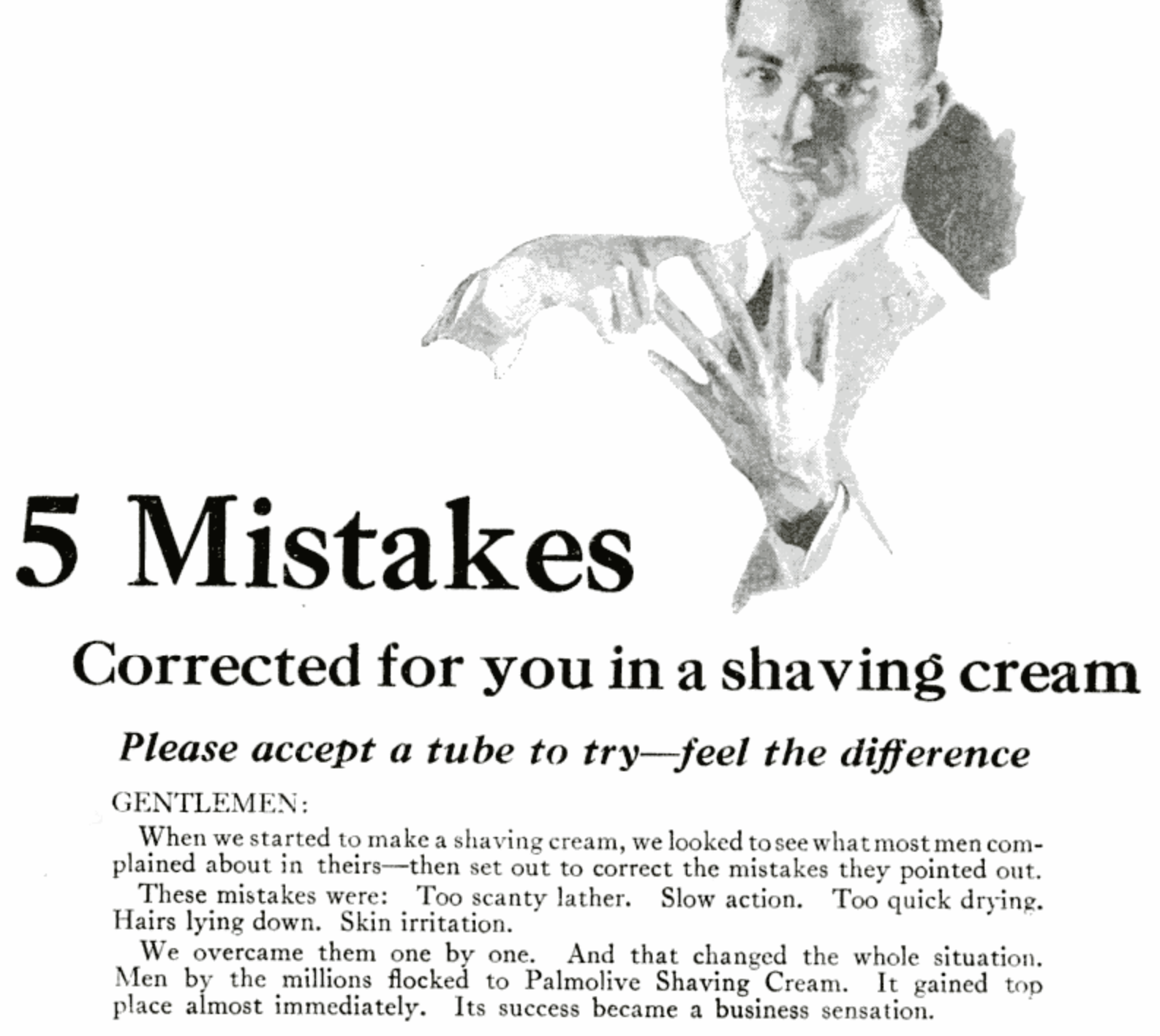 And you thought BuzzFeed invented listicles!

Research tells us that a genuinely surprised reader has your full attention, 100 percent.

This complete state of absorption is the product of an involuntary mental sequence our brains go through when we’re surprised — for better or for worse — by something, like a headline.

“It’s a strong neuro alert that tells us that something is important about this moment and we have to pay attention,” explains Tania Luna, who co-authored a book about how our brains process surprise. “Our cognitive resources are basically hijacked and pulled into the moment.”

In other words, surprising your audience will momentarily stun them with intrigue or curiosity or repulsion or glee, giving you an opportunity to move them into the next sentence.

Note this “surprising” headline from 1974:

This ad was written by famed copywriter Gary Halbert to sell a book called How to Turn Plastic Into Gold.

To set up the offer, Halbert jolted the reader with a paradox, a contradiction that, if true, would be a delightful surprise to every credit card holder alive.

How could you not read the next sentence?

Warning: There’s a wrong way to ask a question in a headline.

Questions that are too obvious (e.g., “Is drinking water good for you?”) won’t compel readers because they already know the answer. And fear-mongering questions (e.g., “Does your newborn have cancer?”), while compelling, ultimately destroy your integrity and credibility.

These questions work well because moments of deep reflection are incredibly emotional — and emotions sell. Of course, they also take the most effort to research and develop. Success demands investment.

Note this “question” headline from 1997:

Though he never actually answers the question in the body copy, it was still a successful ad. Whether you answer the question or not doesn’t matter. What matters is how the question made the reader think and, of course, feel.

In this case, the question worked because it quickly shifted the reader’s perspective — and that made all the difference.

The easiest, clearest way to promise value in a headline is to start it with the words “How to.”

“Many advertising writers claim if you begin with the words How to,” writes copywriter Bob Bly, “you can’t write a bad headline.”

It’s much easier, safer, and less stressful to lean into someone else’s guidance.

Note these “value-based” headlines from 1974:

The copywriters at Ogilvy & Mather consistently leveraged the power of value-based headlines to capture attention.

These are but a fraction of the incredibly simple and straightforward “How to” headlines created by Ogilvy’s agency over the years.

The format’s prevalence can only mean one thing: it works.

“Remember,” wrote Dale Carnegie in How to Win Friends and Influence People, “that a person’s name is to that person the sweetest and most important sound in any language.”

This attention-grabbing trigger plays off of that concept, because while a static headline can’t call out your reader by name, it can help them self-identify as part of a larger group, or tribe.

By implicating your reader directly in the headline, you’re making it crystal clear that they’re in the right place, that they should focus, settle in, and keep reading.

Note this “self-identifying” headline from 1936: 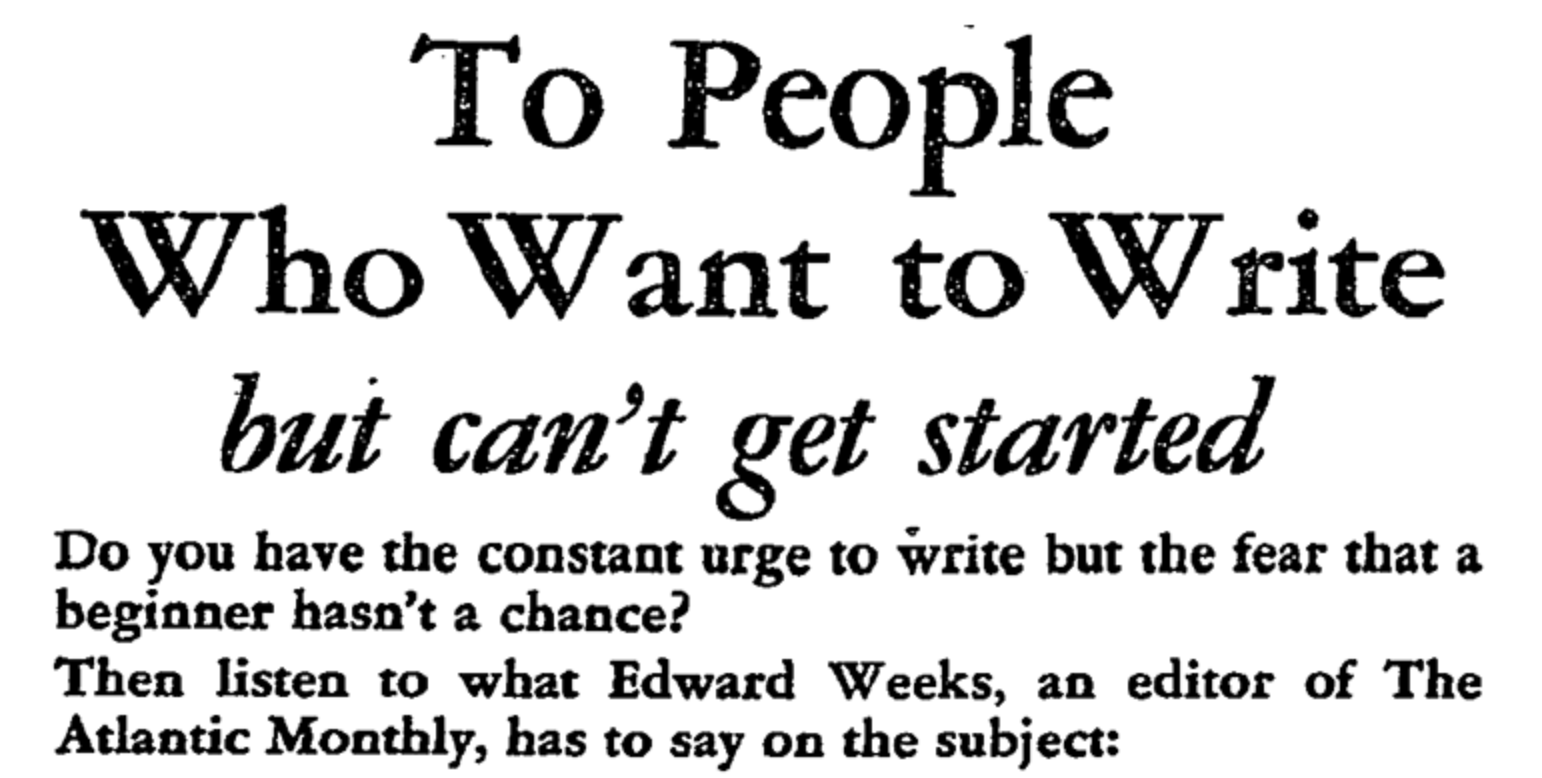 The Newspaper Institute of America created this advertisement to sell writing classes.

The ad ran for almost 30 years, yet the headline and sub-headline never changed.

As you can see…

These tactics aren’t a new phenomenon. Copywriters have been leveraging these psychological tricks and triggers to command attention for generations.

In other words, they’re proven — and now, they’re yours for the taking.