The Secret to Asking Sales Questions Assertively, Not Aggressively

Questions are some of the most valuable tools in a salesperson’s arsenal. With a well-crafted inquiry, reps can open their prospect’s mind to a new possibility, compel them to action, discover relevant information, or secure buy-in for the next step. 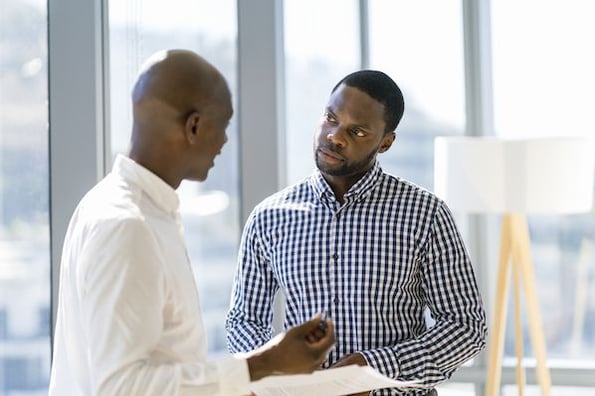 But if reps ask questions aggressively, they won’t get far.

Instead, they’ll alienate prospects or even anger them -- and, unsurprisingly, angry prospects aren’t eager to talk.

The silver lining? There’s a simple test for differentiating between aggressive and assertive questions.

How to Tell an Aggressive Sales Question From an Assertive One

When attempting to determine whether a question is aggressive or assertive, length is your first clue. In general, longer questions feel more aggressive than assertive ones.

When the salesperson leads with intent or context, prospects can feel pressured to respond a certain way. Getting right to the point, on the other hand, makes prospects feel like they can answer however they’d like.

That brings me to the second indicator -- the format. Aggressive questions start with the rep’s reasoning and then segue into the actual request, like so:

“It’ll probably take less time if I speak to your HR department myself. Who should I contact?”

Compare that to a question that cuts to the chase:

“Is anyone in HR assigned to this area?”

The first variation comes across as far more pushy. The decision to speak to HR sounds like a foregone conclusion, because the rep has introduced their reasoning first. The salesperson is also taking for granted their choice is the right one for the buyer -- and that’s a dangerous assumption to make.

The second variation leaves room for the buyer to introduce an alternative (like talking to HR herself, or suggesting a different contact), enabling buyer and rep to come to a mutually agreed-upon next step.

The Formula For Assertive Sales Questions

Reps can turn an aggressive question into an assertive one by asking it in one sentence. This rule forces them to cut out all preface, leaving only the core ask.

Before:“The events team will definitely want to come to the demo so they can evaluate our offering. When would be a good time for all of us to meet?”

After:“Is there a good time for you, me, and the events team to meet for a demo?”

Of course, the salesperson should provide an explanation if their prospect requests it. Imagine that in the above scenario, the buyer says, “Wait, why should the events team attend this meeting?”

The rep might reply, “If the events team manages their mobile bookings through the tool, it would free up operations to focus more attention on assisting your team.”

With that context, the buyer can either approve the events team’s attendance, or say it’s not necessary.

There’s an added benefit to asking one-sentence questions; When reps keep their queries short, they never fall into the trap of nervous rambling. It’s easy to accidentally ask a two, three, or even four-part question -- but doing so can easily confuse or even overwhelm a prospect.

Seasoned salespeople usually find that brief, focused questions keep the conversation on track and decrease potential hesitation. While it can feel awkward or rude at first to immediately get to the heart of the question, the more reps practice this technique, the more comfortable they become.

1. Leave yourself out of it

Remove the singular pronouns, including “me” and “I” around things you want. The assertive salesperson asks for what they want and waits for the answer.

For example, “You know, it would be great to get another point of view on the next call. Can you invite your boss?” You’re stating the answer you want and then convincing your prospect why they should say yes.

The aggressive person says something passive like, “I’d really love to have your boss on the demo.” This is a statement dressed as a question -- and it’s the sign of a passive aggressive salesperson who’s not brave enough to ask for what they want.

Every once in a while, a prospect will respond to your question with an answer you don’t like. Avoid the temptation to indicate your dislike. If a customer says they’ll review contracts at the end of the month -- then have to push that date back due to a legal issue, don’t say, “Really. Why’s that?”

This type of follow-up question expresses your displeasure at the delay and serves no purpose other than to challenge your prospect’s honesty and erode trust.

If your prospect says, “We have a two-week delay because of legal,” respond by saying, “Thanks for explaining that to me. What can you do by the date we agreed to?”

You’re accepting their answer and asking if there’s anything you can collectively accomplish by the original date. If their answer is, “I’m afraid we won’t be able to meet any of our deadlines quite yet,” it’s time to move on.

3. Be conscious of your verb choice

Telling your prospect, “I’d really like to meet your boss,” is a statement, not a question -- and it’s aggressive. If you want to meet their manager, say “I’d love the chance to explain the benefits of our product to your boss. Would it be possible for us to meet?”

If you’re following up after a competitor’s pitch, avoid saying, “I’m calling to check in.” Instead, explain “I’m calling to see how [Competitor’s] pitch was.” Keeping your request specific makes it impossible for your prospect to misunderstand or avoid answering the question.

Walking the line between assertive and aggressive takes effort -- and the way salespeople ask questions is just one aspect.

However, if you want to project confidence, involve your prospect in the decision-making process, and keep them focused, it’s always best to stick to single-sentence questions and skip the upfront explanation.

Want more from Jeff? Check out his "Your Sales MBA Blog" today.