On-Target Earnings: What They Are & Are OTE Jobs Worth It?

Expectations in professional sales between employer and employee go both ways. Employers expect their sales reps to meet a quota, conduct themselves professionally, and consistently make good on their standards. Sales reps expect to be compensated by their employer through what is commonly referred to as their OTE, or “on-target earnings.” 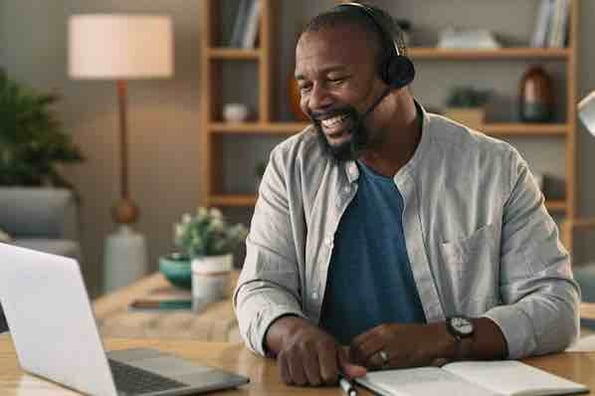 Having a well-thought-out OTE model is imperative to building a high-performing sales team. In this post, you’ll learn what OTEs are and their benefits.

What is OTE in sales?

The term 'on-target earnings' refers to the total compensation a sales rep can expect to receive if their performance matches the expectations of their role. The figure is generally the sum of a position's base salary plus any additional variable components like commission. 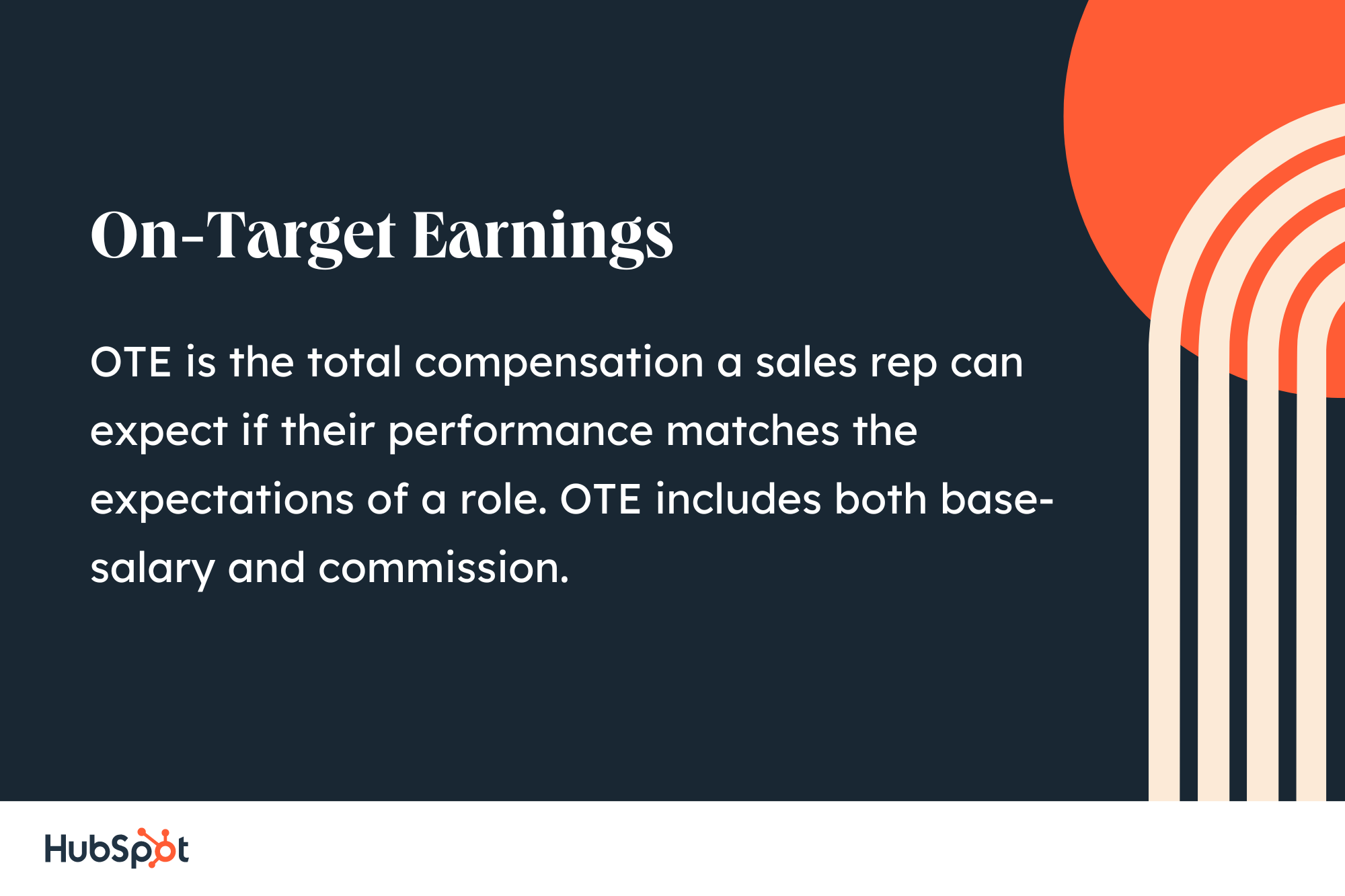 On-target earnings determine how an organization sets revenue expectations. This incentivizes their sales reps to work hard to achieve their agreed-upon goals.

Outside of providing a general idea of earning potential for their reps, on-target earnings provide a benchmark for sales managers. The best managers thoroughly guide reps toward hitting their OTE marks. These managers use OTE as a reference point to let their reps know if and when they need to increase their level of effort to achieve their numbers.

On-target earnings can be an effective recruiting tool. Good sales leaders always make sure the OTE figure they present to prospective candidates is desirable and attainable. But beware: It can be tempting for sales leaders to artificially inflate the OTE numbers they share with candidates as a means of attracting the best talent. However, you should avoid falling into this trap, as it will lead to unrealistic expectations.

OTE can also be a useful way to get different departments in an organization aligned around revenue and expenses. Company leadership, human resources, accounting, and sales need to work together to set realistic OTE figures that feed into their overall financial objectives. 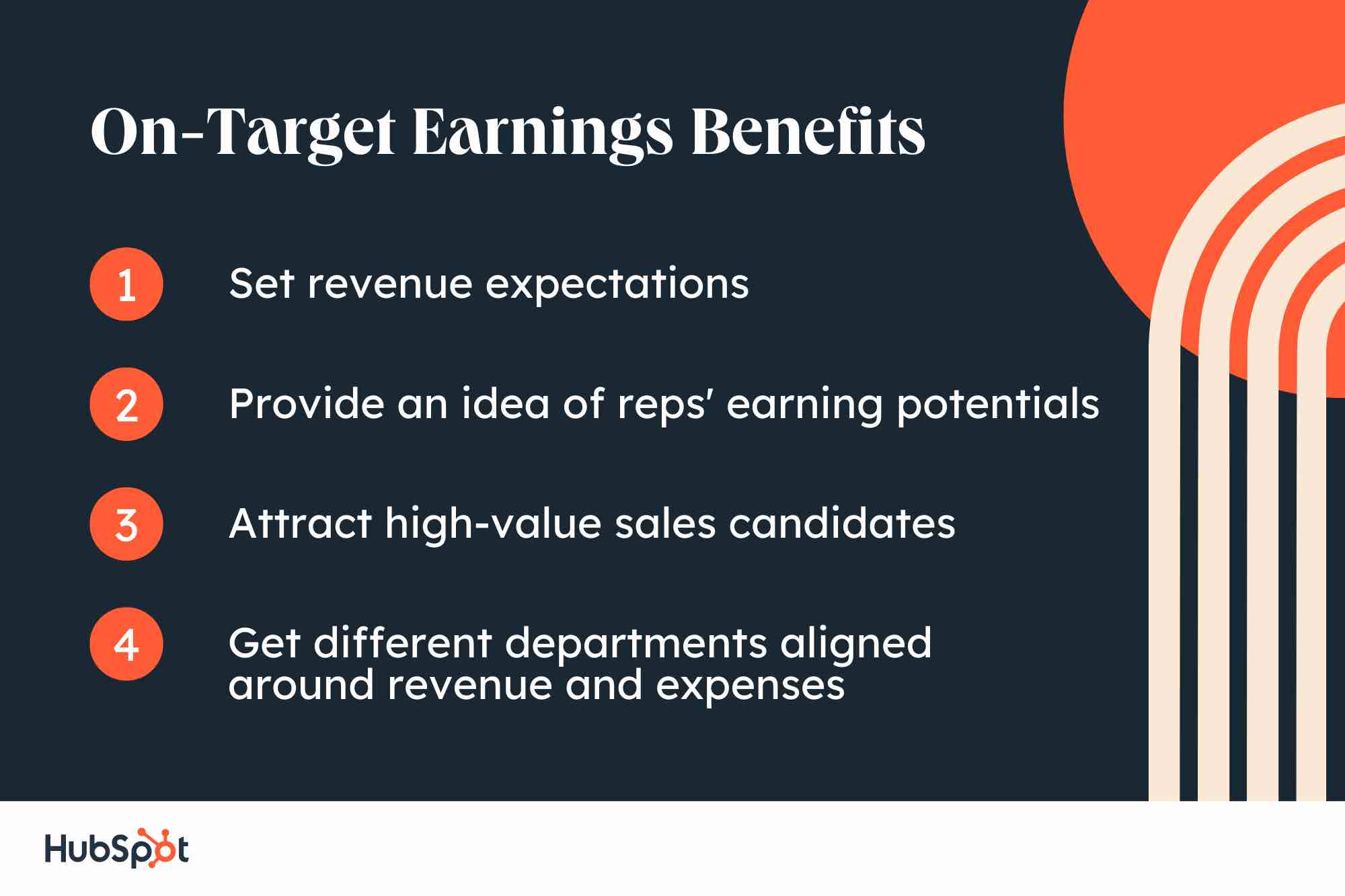 How to Determine OTE

Most companies set parameters when deciding on the potential on-target earnings for a specific position. However, OTE can also be calculated on a candidate-by-candidate basis. You can find this number based on each prospective hire's previously established W2 earnings and what specific experience they bring to the table.

Good sales leaders have their finger on the pulse of the OTE their competitors are offering. Staying knowledgeable can help you remain competitive in the market for talent.

No successful sales rep is going to leave their current position for a lower OTE with a new company. Sales leaders looking to hire must be aggressive, while not misrepresenting earning potentials to prospective candidates.

Most importantly, employers must commit to the figure they’ve presented to a candidate and deliver on their promises. While it is not unusual for organizations to continually adjust their compensation plans, it would be unethical for a sales leader to lower the OTE of a candidate they’ve hired without consulting the candidate first.

Are OTE Jobs Worth It?

If you’re applying for sales roles, you’ll see OTE listed in job descriptions. You may be wondering: Are OTE jobs worth your time, or should you opt for a traditional salaried role?

At transparent companies, on-target earnings will be an accurate window into your future compensation. You’ll have an accurate idea of how much you can expect to make once your base salary and commission are combined. You can also use OTE to assess how many sales you are expected to make in a new role.

OTE doesn’t necessarily limit your earning potential. Rather, it defines what you would earn if you hit your benchmarks (quota). Many of the best sales reps surpass their OTE.

As you research companies, do your due diligence. If a potential employer has been praised for transparency and sales goals seem reasonable, you’ll likely be in good hands.

The Importance of OTE

On-target earning figures are central to any sales hiring process. Unlike traditional salaried positions, sales earnings fluctuate based on several factors. On-target earnings are used as a goalpost. Prospective candidates will know what to expect from the positions they're applying for and, in turn, whether those roles are worth their commitment.

A good OTE number strikes a balance between being reasonable and attractive, and can often be the difference between landing an exceptional candidate or losing out on a marquee new hire.

Calculate how much sales reps will earn with seven different sales compensation methods.