When Is a Deal Truly Lost? 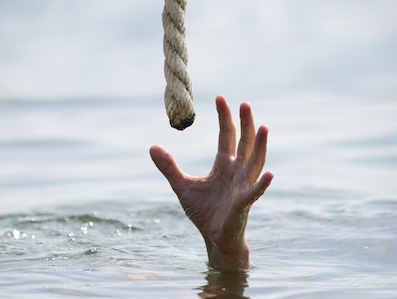 When a prospect says “sorry, not interested.” When you haven’t gotten a response to any of your emails or voicemails. When you haven’t heard from a lead for three months. When a stakeholder you weren’t aware of tells your main contact they need to think it over.

Lots of salespeople take one or more of these events as a cue that the deal is lost. But none of these is actually the right answer.

There’s only one circumstance that signifies the death of a deal, and that’s when both the salesperson and the prospect recognize there’s no value in selling or buying a product or service. Once it’s come to light for both parties that the future state is not better than the current state, then -- and only then -- is when it’s truly done.

The buyer is traditionally seen as the person who makes the value decision. If they say they don’t see value, the salesperson nods, thanks them for their time, and goes away. However, the value perceived by both sides is equally as important. The salesperson isn’t just an order-taker -- if they know their business and the prospect’s well, they also have an idea of value that matters just as much as the buyer’s. 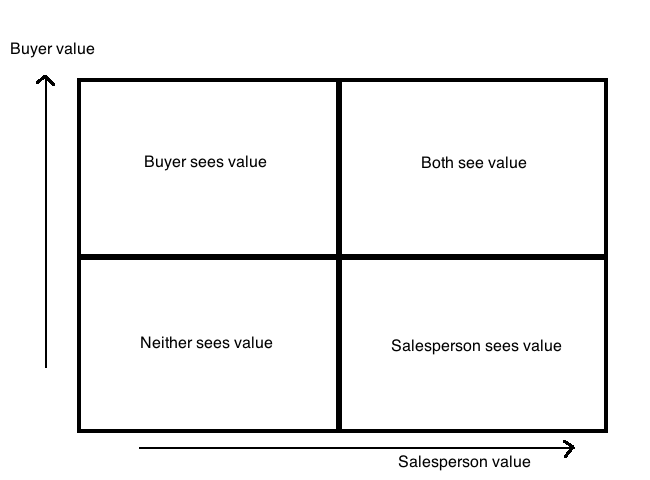 The remaining two are trickier. If the buyer sees value and the salesperson doesn’t, one of two things is happening. The prospect might not really understand what they’re buying, and it’s the salesperson’s duty to explain why they don’t recommend moving forward. If the salesperson brings new information to the buyer’s attention that then changes their decision, neither side sees value, and the deal is dead.

Alternatively, the salesperson might have missed something about the buyer’s environment that truly makes the product or service valuable to the buyer; for instance, another stakeholder or an unforeseen use case. Once the salesperson gets filled in, both parties see value, and the deal goes through.

The last quadrant is the toughest one to deal with -- when the salesperson sees value and the buyer doesn’t. Rather than imparting the value to the buyer in a way they understand, many salespeople will simply accept a “no” and walk away.

But as long as value exists, the deal’s not dead. It’s incumbent upon the salesperson to articulate the value in terms that resonate with the prospect. And instead of putting the onus of the prospect’s value perception on the prospect (it’s up to them to see the value for themselves), the salesperson should shoulder the responsibility. I’ll illustrate this with an anecdote.

Many years ago, I had a PalmPilot that didn’t hold its charge for very long. I had to go on a short business trip to Boston -- just two nights -- and forgot the charger.

It was a disaster. My PalmPilot contained my entire life -- I had no idea where I was supposed to be or who I was supposed to be meeting without it. With the grim scenario of a dead PalmPilot looming, I rushed into an electronics store and asked the guy at the counter for a charger. He retrieved the correct charger, and asked if I needed anything else -- perhaps a new case. I was in a hurry so I declined.

However, he persisted. Was I sure I didn’t need a new case? I was getting angry at this point as he knew I was in a hurry, and I repeated that I didn’t need anything but the charger. But then he asked me a question: “Does your PalmPilot lose its charge really quickly?” When I replied that it did, he told me it was because the case I had pressed the device’s buttons when it was in my briefcase, thus keeping it on and draining the battery. He went to the back and put a case on the counter that had depressions where the buttons were, so the phone wouldn’t stay on in my briefcase. I bought it gladly.

This is a classic case where the salesperson saw value, but the prospect (me) didn’t. But instead of taking my “no” for an answer, the salesperson found a way to communicate the value in a way that mattered to me -- he knew his product, he knew my problem, and he connected the two. And once we both saw the value, the deal went through.

If you have deals that stall, or buyers that say they need to think it over, you as the salesperson haven’t adequately expressed value. And as long as you see value, you should take responsibility for helping all relevant stakeholders understand. On the other hand, it could be that you aren’t grasping that there’s really no value -- dig deeper with the buyer to see if what you’re offering is a nice-to-have or a have-to-have.

There’s no one fail proof way for making prospects see the value you see -- you need to understand their business, goals, and pain points, and explain the value in a way that will resonate with them, just as the electronics salesperson diagnosed my Palm Pilot issue. But above all else, remember: As long as there’s value on the table, the deal’s not dead.