If you're like me, you probably receive countless unsolicited sales emails and voicemails every month -- and most of them are really bad. 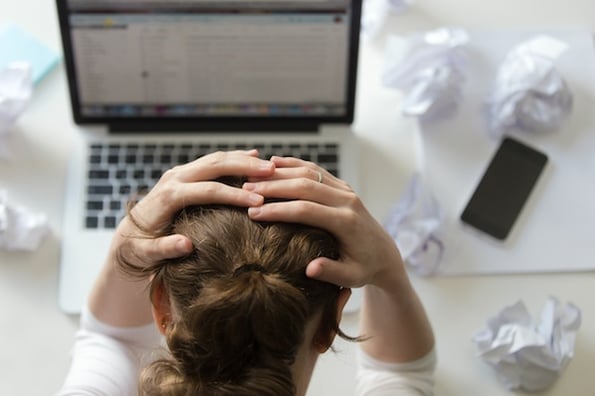 To give you a taste, here are the opening lines of follow-up emails I received in the past few weeks. Notice anything?

Each of these salespeople attempted to guilt me into responding.

I followed up with some of these reps to determine if this approach gets responses. A few said it works fairly well -- they get single digit response rates when opening follow-up emails with this line.

One salesperson -- the top-performing rep on his team -- even sent me his five-email sequence where four out of five messages start with laying down a thick coat of guilt.

Jeff Swank, a high-performing salesperson at HubSpot, brings an old email to the top of a buyer’s inbox by using the subject line "email buried?" and writing one short sentence in the body -- "Just want to follow up in case this email got buried."

He's not the only one on the HubSpot sales team who sends these kinds of emails. For several years, we actively taught our salespeople to reference previous connection attempts when reaching out to inbound leads that one final time before taking them out of the pipeline. And it worked … for a while.

But now I’m wondering -- has it gone too far? Has guilt become the prospector’s go-to emotion? Are salespeople using it too soon and too often in their emails and voicemails? And are there some subjects you just shouldn't discuss over email?

I think the answer is yes -- using guilt in prospecting emails is a huge mistake.

Does Guilt Work in Sales?

Less than 1% of sales phone calls are returned and less than 24% of sales prospecting emails are opened. This to me shows that buyers do not feel guilty about ignoring prospecting attempts from salespeople.

Mark Suster, successful entrepreneur and busy guy, sums up why decision makers ignore emails like so: "I’ve learned that some people just can’t process 100% of email. The more senior people are, the more demands they have on their time. The older they are, the more out-of-work responsibilities they have."

Does provoking feelings of guilt make some buyers feel bad? Probably -- but bad feelings don’t move the needle for salespeople. What does is responses.

And do guilty feelings make buyers more likely to get back to you? Not usually. Instead of rushing to answer your email, what’s more likely is their guilt will snowball into sadness, frustration, or annoyance -- not exactly the feelings salespeople hope to provoke.

"Guilt is not a very good motivator,” Susan Krauss Whitbourne, Ph.D., a professor of psychological and brain sciences at the University of Massachusetts Amherst, notes. “In the overall scheme of emotions, guilt is … one of the 'sad' emotions, which also include agony, grief, and loneliness."

Personally, I'd love to get back to everyone if I had time, but I don’t. And I certainly don't have time to oblige every "15 minute request” for a call that usually comes right after the guilt trip, like in the example email below. (Names are changed to protect the guilty, or in this case, the guilt-inducing.)

Hope you got my second voicemail. Between you and me, never been an answering machine person.

Would you have 15 minutes to connect? Apologies for the bombardment. I just see HubSpot as a great potential fit to partner with X company.

What is a good time for you for a 15-minute call either today or tomorrow?

Looking forward to speaking with you!

Do I feel bad for not getting back to “Mary”? Somewhat. But realizing that my time is best spent doing the things I decide to do (and based on the sheer volume of email I receive), I have no choice but to stop worrying about getting back to everyone who messages me -- even the people I know and especially the people who I don't know and who don't know me.

Which brings me to my next point …

You Can't Guilt Someone That Has No Obligation to You

Now, I'm not going to say that you should try to avoid making someone feel guilty at all costs. But you should recognize and internalize this critical point: Guilt won’t sway people who feel no obligation to you. And with that in mind, I think the only appropriate time to provoke guilt is when someone already committed to doing something and didn't follow through.

Janine Popick, founder of email marketing firm VerticalResponse, recently shared a story where guilt provoked her to respond. Here's the note she received from a potential partner she had agreed to work with in a previous communication.

Just wanting to be practical here. Since I haven't seen or heard back from my many messages to you, I have to assume it will be impossible to bring your offerings to our audience.

I hope I may be mistaken, but the long silence prompts me to think I should just take you off this list. While I would love to see the great solutions you create as part of our world, I have to accept that silence likely means no.

If I'm mistaken, do feel free to let me know, but if I don't hear from you, I'll be clear with our team that working with [Company] isn't of interest to VerticalResponse here.

Wishing you all the best (and hoping to be very wrong).

"Whoa! I felt like crap!” Janine wrote of her reaction to the note. “I instantly emailed her back, apologized, and told her why we've been a bit quiet."

While this guilt-tripping email elicited a response from Janine, the approach should be used sparingly and caringly, like in this example.

In addition to being sent only after Janine failed to follow through with a commitment she expressly made, the sender unleashed the guilt only after several previous follow-up attempts, and gave Janine a clear and easy out.

Another way to soften the blow of an email like this is to excuse the lack of response, by writing something along the lines of, "I understand you are busy. Please don't feel guilty for not responding," and then providing the prospect an out.

According to Mark Suster, an apology works too: “I know how busy you are. I hope you don’t mind I'm putting this at the top of your inbox.”

When to Use 'Haven't Heard from You'

As we've outlined above, using "Haven't heard from you" in email or voicemail communications is usually rude, attempts to guilt your recipient, and just plain doesn't work.

When you'd like to provide a polite and gentle nudge to your prospect, first consider waiting five to ten business days before contacting them again.

This acknowledges they're busy and gives them time to respond to you on their own (which is always preferable to a nudge email). It also prevents you from looking desperate -- which is never a good way to begin a business relationship.

But, when you've waiting the appropriate length of time and you're ready to reach out again, test these alternatives, instead of "I haven't heard from you":

'Haven't Heard from You' Alternatives

Lay the Groundwork for Relationships, Not Guilt Trips

If the guilt angle isn't the right way to improve response rates, what is? In my opinion, salespeople should try initiating a relationship first. And in order to do this, reps need to slow their roll.

Instead of trying to get responses along the lines of “You might be able to help me -- let’s talk,” salespeople should aim for something closer to “I can relate -- I’d like to get to know you.” Build a relationship first, and then your buyers might actually feel guilty when they miss one of your emails.

Here's how to prioritize relationship-building in your prospecting:

In that crucial first email, most salespeople try to snag their buyers’ interest by explaining the value of their product. If that doesn't elicit a response, many resort to guilt laden follow-on attempts.

But this strategy works only a small fraction of the time, and does nothing to forge a relationship between buyer and seller. After all, prospects don't look kindly on people who try to give them guilt complexes.

The key to effective prospecting is building relationships first. Initiate a relationship by being interested in the other person. Do your research and then write customized messages based on what you find.

Better yet, attract buyers to you through social prospecting, blogging, and website optimization, and then use that engagement to increase your timeliness and relevance, and ultimately your connect and close rates.

This quote from Suster sums it up well:

"My goal is not to make [people] feel guilty. That’s silly. If they’re important that’s the last thing I’d want to do."

If you’re overloaded and struggling to keep up with email, so are your buyers. Have some empathy, and put away the guilt. Oh, and stop using these other bad sales phrases, too.

Use these templates to follow up with colleagues, sales prospects, recruiters, and networking connections.