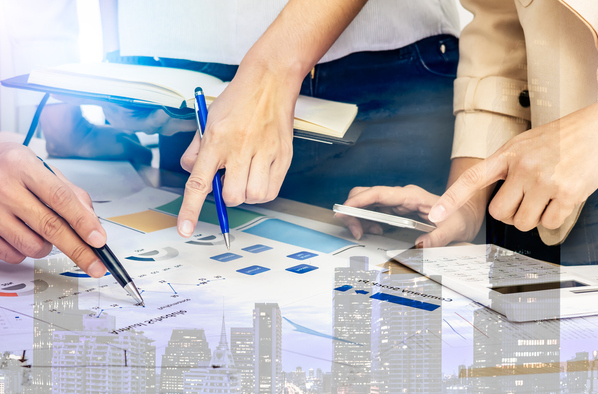 Imagine this. You work for a social media company where users regularly update their “status” and post pictures and videos of their favorite moments. Since the big social media boom of the early 2010s, the company has capitalized on people’s readiness to share information. Where did you go to college? Where do you work? What’s your relationship status?

There are tons of information social media users put out to the public; however, some of the data these platforms store is private. Instead, the company experiences a data breach that exposes the information of more than 540 million users. Facebook dealt with this crisis in April 2019, but they are not the only company dealing with data breaches.

Capital One, the financial organization, reported a data breach in July 2019 where a hacker gained access to tens of thousands of bank account numbers and Social Security numbers. Less detrimental but equally as interesting, Twitter saw a coordinated attack on their high-profile users where hackers managed to take over the accounts of Barack Obama, Jeff Bezos, Apple, Uber, and more.

When you are on the outside looking in, this information appears as an interesting news piece. However, for those involved, these situations can feel like a crisis. And they are treated as such. In response, companies mobilize their team to handle crisis management.

What is crisis management?

In the workplace, a crisis can be any disturbance or unexpected event. Crisis management is a calculated response to protect a company from the adverse effects of a crisis. This process requires quick action to minimize the potential harm that the company and its stakeholders face while also minimizing the impact on their collective reputation.

Companies organize a group of employees to control these situations and serve as their crisis management team.

A crisis management team is a group of individuals responsible for identifying and addressing crises within a company or organization. Their tasks include carrying out actions based on the current events, determining the potential risks, and minimizing the fallout.

Roles and Functions of A Crisis Management Team

Management is responsible for managing the crisis response. Its functions include determining the priorities and objectives of their action plan while also directing the rest of the crisis management group.

Operations departments focus on assessing the initial damage of the crisis, establishing control over the situation, and restoring systems and processes to normal.

Intel departments work in intelligence and planning. The employees in this department work to collect, evaluate, and share information to recommend a response to the crisis.

Administration staff and human resources are two departments of logistics. During a crisis, it is their job to make sure the company meets the needs of the employees. Examples are transportation, medical care, and counseling.

It is the responsibility of the finance department to finance the crisis. Identifying, addressing, and resolving issues will always cost a company money, and the finance team handles all costs associated with the crisis response.

The structure of a company often looks like a pyramid. There is one leader, often the founder or CEO, at the top before the hierarchy divides into high, middle, and low-level employees. However, crisis management teams are less like a pyramid and more like a smooth-running cogwheel. While there is a leader at the head, the rest of the group has different but equally important roles. 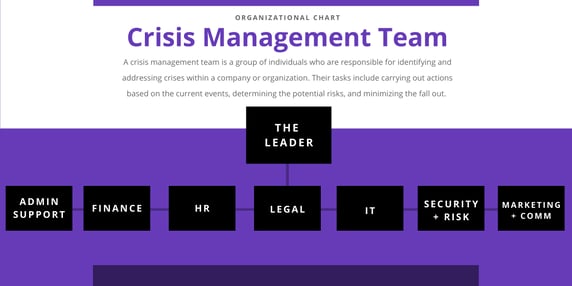 The following departments make up a crisis management team:

At the top of the crisis management team is the leader. Their tasks include managing the team, guiding the process and timeline of the response, and facilitating the continuation of operations.

The administrative support staff serves as the “catch-all” for the crisis response team. Not only are they responsible for supporting the team leader, but they help and assist the rest of the crisis management team in fulfilling their roles.

As previously mentioned, the representative from the finance department manages the costs associated with crisis response. Let’s return to the April 2019 Facebook data breach. The company settled with the FTC for $5 billion for violating user privacy. Arranging payment for this fine is the responsibility of the finance team.

The work of human resources during a crisis is for the employees. If a situation occurs that affects employees, HR is responsible for overseeing the support of these individuals.

Legal teams handle the legal ramifications for the company. They provide advice and support to the involved parties to help them make informed decisions about any liabilities or legal risks.

IT departments are in place to ensure that computer networks function correctly. In response to a crisis, this team member will report any impact on the company’s systems and functionality.

The employee representing this department is a proponent for other departments dealing with security and risk. Members of this deal typically deal with data and physical security responses.

One of the most sensitive parts of a crisis is how the situation is shared internally and externally. The way this department distributes information can easily skew opinions. This person or team is responsible for assessing the damage and impact of the crisis and crafting a plan for how it will be addressed and communicated.

Prioritize the calm before the crisis.

The best time to prepare for a crisis is before it happens. Therefore, one of the most urgent responsibilities of a crisis management team is detecting a crisis in its early stages. This team will help expedite response time, facilitate an efficient action plan, and minimize any negative impact.

How To Create a Business Continuity Plan For Crisis Management [+ Template]