Free water, free snacks, free groceries — this founder is creating a business model that provides everyday products at no charge, while leaving room for profit and charitable donations. 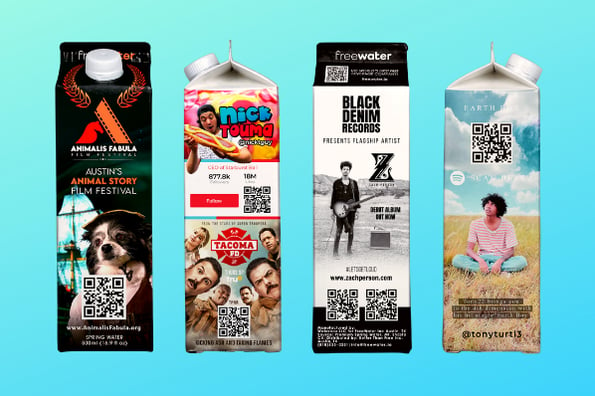 A precocious entrepreneur, Josh Cliffords started his first venture at age 10, hawking lemonade made from the lemon tree in his family’s front yard. One day, out of childish curiosity, he decided to give away his drinks for free to see how many customers he could attract.

“There were lines of cars across the block and I ran out of product, so I started selling my baseball, basketball, and football cards,” Cliffords remembers.

The budding businessman made out with thousands of dollars, and convinced his parents to let him invest it in Microsoft stock in 1995. “By the time I was in 9th grade, it was worth more than $35,000,” he says. “That got me started in entrepreneurship.”

More than a quarter century later, Cliffords is trying his hand at free products again. FreeWater, which he founded in 2021, makes bottled spring water that has no charge for the consumer. It sells the water bottle labels as ad space and uses that revenue to cover the manufacturing and distribution costs. Part of its profit goes to Well Aware, an Austin-based nonprofit that builds wells in African villages.

Brands that want to advertise have 2 options: FreeWater can put the client’s ads on its bottles then ship it to them to be distributed, or businesses can have their branded bottles doled out by FreeWater (an option limited to Austin for now but set to expand). If a client wants targeted distribution — only targeting women, for example — FreeWater charges an additional 10 cents per bottle.

In 2021, FreeWater distributed 32k beverages and gave away $5k to Well Aware. It currently earns 30 cents per bottle, keeping 20 cents for itself and donating the rest. For 2022, it has already manufactured 40k bottles in Q1 and plans to distribute between 250k and 1m beverages for the year.

Business is growing fast at a time when shoppers are becoming increasingly aware of the impact of their purchases. According to one 2021 study, 63% of global consumers have made significant shifts to their buying habits in an attempt to live more sustainably.

And research has shown that consumers care about how socially conscious brands are. FreeWater advertises its charitable contributions on its bottles, and opts to only use aluminum cans or paper cartons to reduce waste from its products. 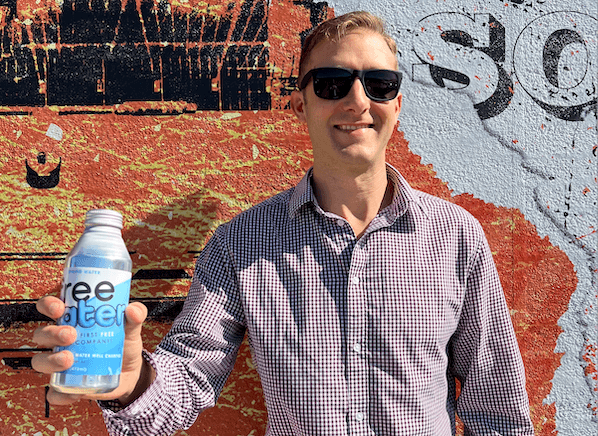 Despite FreeWater’s quick rise, Clifford’s path to success was anything but linear. He started a gym in Los Angeles in 2007, grew bored of it, and sold the business. The money got him an RV and a yearlong cross country trip, but he eventually ran out of gas money, sold the RV, and traveled to South America for 6 months.

He then enlisted in the army, where he got hurt during training right before his 30th birthday. At a loss for his next steps, he decided to take a journey around the world. On that jaunt, he met Nigerian refugees in Rome by happenstance, and was so moved by their stories that he canceled the rest of his trip and founded a nonprofit called Save the Refugees.

“We helped more than 10k refugees in 18 months, and that’s how FreeWater began,” says Clifford, whose charity provided them with food, essential supplies, and support. “Speaking with these people, I realized that more than 20% had left their countries because they didn’t have access to water, food, or medicine.”

But getting FreeWater off the ground was fraught with challenges. As a person with dyslexia, Cliffords struggled with reading and did not learn to type until he started the company. He had no idea how the advertising industry functioned, or how to create and manufacture a product. He ended up spending hundreds of hours on YouTube to learn how to type, code, find success in the ad industry, and make prototypes.

“The only reason I didn’t quit is that [the company] will solve the water, food, and medicine crisis within this decade. That’s 35mn lives saved every year,” Cliffords says. “Even in my toughest moments, I pushed forward because of that.” 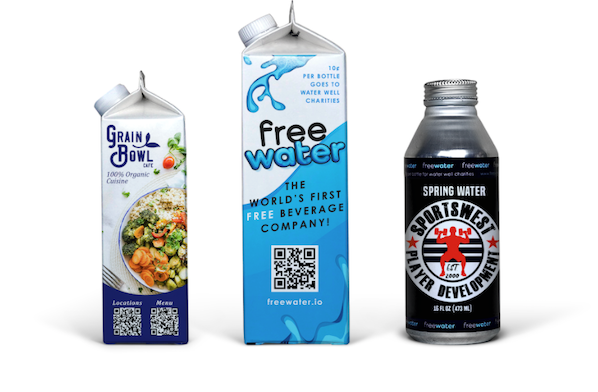 In a competitive space, Cliffords says his business model works due to the efficacy of physical advertisements. Research shows that direct mail is the most effective marketing medium with an average campaign ROI of 112%. FreeWater takes it a step further by offering a more functional product at a lower cost.

While the average mail flyer costs ~35 cents to make and garners one read before being tossed, Clifford estimates that his bottles, which sell for ~$1 per unit, will be looked at 10 times before being thrown away.

By placing ads on bottles that are held throughout the day and kept in homes instead of flyers that serve no purpose, FreeWater can cut the cost per impression and reduce the environmental impact of frequent mailings.

The bottles are also the perfect blank canvas for creative campaigns, allowing companies to offer compelling messages and calls to action. One of the best Clifford has seen: a bitcoin banking app called LVL that gave $50 in bitcoin to anyone who scanned the QR code on the labels.

Another draw for companies, according to Cliffords, is brand loyalty and positive customer experiences. While other advertisements annoy and interrupt — think commercials or pop-up windows — FreeWater does the opposite by offering an enjoyable product.

The long-term plan is to develop what Cliffords calls “Amazon 2.0,” a marketplace of free products. His business has designed vending-machine prototypes that will be released by the end of the year, with ambitions to expand around the globe. The machines won’t just have water but will be stocked with snacks made free by advertisements.

“Within 36 months, every product that is currently sold at Walmart or Costco, we’ll be offering for free — or negatively priced with the donation component,” says Cliffords. “If you ask me, the future is local and it’s free.”