You know how marketers use blogging tools like Grammarly and Hemingway to spell check their posts and improve their readability? Developers can use similar tools to help them write and improve their code. These are known as code editors.

Ideally, a code editor will provide at least the basic functionality you need to write code faster and easier. This includes spell checking, syntax highlighting, and auto-completion. While such a basic editor might be ideal for beginners, experienced coders might prefer a more advanced editor.

Below we’ll look at code editors that range in functionality, price, and purpose so you can pick the one that best suits your experience, budget, and business. Let’s get started.

It’s important to understand that any text editor works for HTML documents, but some are optimized for the syntax of a specific language. To highlight the best for HTML and CSS, respectively, we’ve divided the following code editors into two sections. Let’s get started.

The best HTML editors will provide the functionality you need to write code correctly — and to write it faster and easier. Ideally, it will provide a clean interface, syntax highlighting, and preview tools in the operating system you use.

Below we’ll take a closer look at the best-rated editors on G2.

UltraEdit is designed to be an all-in-one solution. It solves for every challenge a developer or IT professional faces: programming and project management, text data and record reformatting, data sorting, large file manipulation, remote file operations, advanced file searching, and more.

That means it’s ideal for advanced users working on their own or in enterprise companies, and not for beginners or hobbyists. The pricing reflects this. You can purchase for a one-time fee of $119.95 or $189.95, or pay an annual subscription of $79.95 or $99.95. While none of these price points are unreasonable, they are high compared to all the free alternatives on the list. 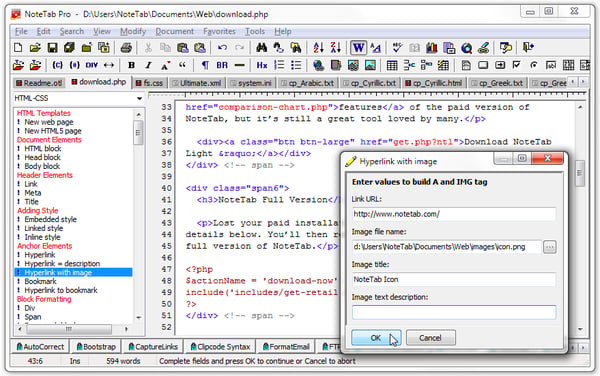 NoteTab gives you complete control over your HTML code and speeds up the creation process. With this editor, you can insert tags and other HTML code from a toolbar, drag-and-drop code snippets from a list to your document or insert them using a keyboard, and use the auto-complete feature to insert tags as you type. There’s also a multilingual spell checker included and a customized input controller for syntax highlighting.

What really sets NoteTab apart is that it’s the only HTML editor offering support for Bootstrap CSS. This will enable you to build a Bootstrap site faster with NoteTab than with any other editor.

Some drawbacks are that NoteTab does not support Git. It also currently only offers syntax highlighting for HTML, XML, and CSS files, so this is not for you if you’re working with JavaScript, PHP or some other programming languages. 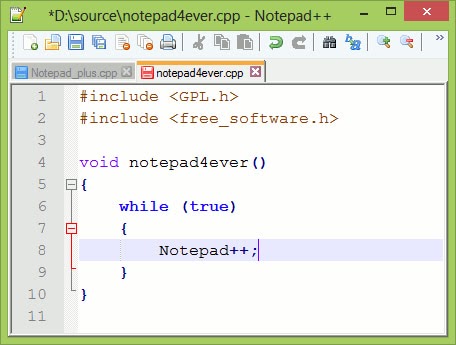 Notepad++ is a free, open-source code editor that’s specifically designed for novice programmers. Like other code editors, it offers syntax highlighting and autocorrect. What sets Notepad++ is how many languages it supports, how many files you can load and work on simultaneously, and how lightweight it is. In addition to HTML and CSS, Notepad++ supports 75 other programming languages. You can open up different file formats in these different languages at the same time and make edits without having to worry about using a ton of CPU power or causing slow load times.

There are limitations that make this editor less than ideal for some users. First, Notepad++ only works for Microsoft Windows. That means, if you’re working on any other operating system, like MacOS for example, then you’ll have to use another editor. Second, Notepad++ does not offer support for Git. If you want to work with that code repository, then you’ll also be better off using an alternative. 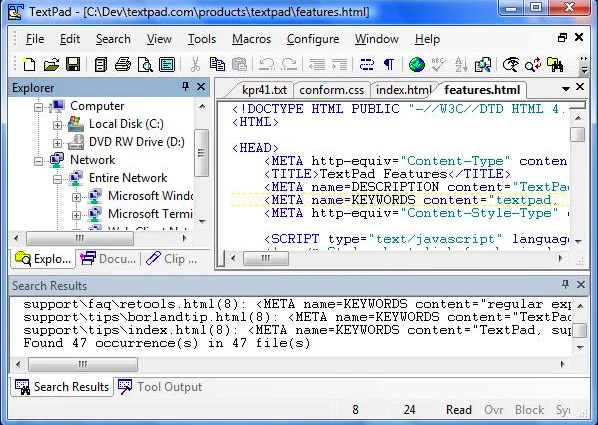 TextPad is a simple and intuitive editor that’s ideal for plain text files. Its interface can seem austere when compared to others, but that’s purposeful. It’s designed to be so simple that you can use right away. TextPad allows you to edit multiple files simultaneously, drag and drop text between files, indent blocks of text, split or join lines, insert whole files, and undo and redo any changes.

It’s not updated as often as other editors on this list, which can make the product feel more stagnant. 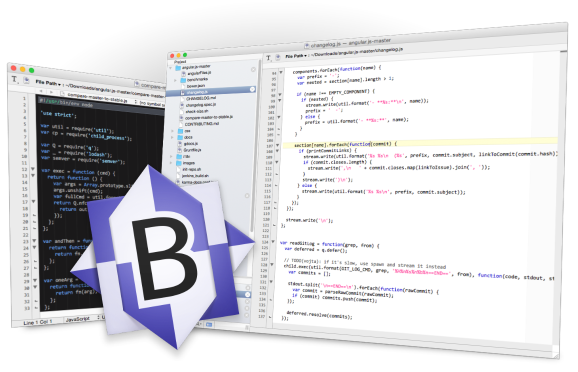 BBEdit is an HTML editor for macOS that offers a free and premium version. It makes it easy to create, import, and edit files and to search for and replace text across multiple files. With this editor, you can also compare two text files and analyze them to find any missing, extra, or similar text between them.

It’s ideal for developers looking for basic functionality. For anything beyond that, like code error checking and debugging, you’ll need a more advanced editor. 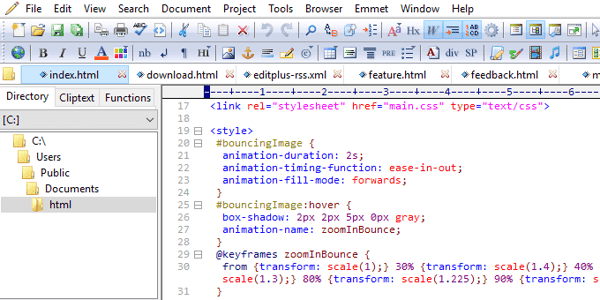 Edit+ is a premium code editor for Microsoft Windows. The pricing depends on the number of users that you need to buy a license for.

Whether you’re a beginner or a seasoned programmer, you might need an editor that can help you take control of your HTML and CSS (as well as other programming languages). In that case, check out the options below.

Visual Studio Code is one of the most powerful open-source, cross-platform editors. Rather than the standard syntax highlighting and autocomplete, VS Code offers IntelliSense, which provides smart completions based on variable types, function definitions, and imported modules. This makes it a powerful solution for debugging your code. VS Code also integrates with Git (as well as other providers) so you can push code to or pull from any hosted SCM service.

One major drawback is that there’s no preview tool, which can be frustrating for developers working primarily with HTML or PHP.

Sublime Text is like the Notepad++ for advanced users with sophisticated needs. It’s compatible with multiple programming languages like Notepad++. It offers the standard features that Notepad++ offers — and so much more, including cross-platform support, split editing, and multiple-selection editing. In exchange for this power and flexibility, you’ll have a much steeper learning curve.

For example, you can use a variety of keyboard shortcuts to quickly execute tasks in Sublime Text — as long as you can remember them. You can customize virtually everything in the editor, from key bindings to menus to snippets and more — as long as you have the time.

All of these features are included in the free version of Sublime, but you can upgrade to the premium version for more functionality. 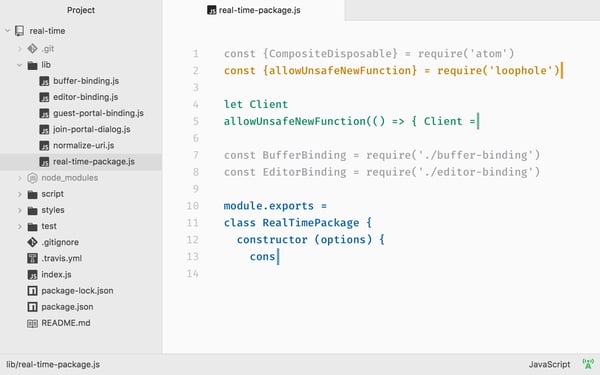 Developed by the GitHub team and maintained by the GitHub community, Atom is a free, open-source code editor. That means when downloading Atom, you’ll get the entire GitHub package so you can create and push out code in the same place and, secondly, that any developer can use, edit, or extend its source code.

To make it easy for developers to do this alone or together, Atom offers the Teletype package. You can think of Teletype as the Google Drive for developers. This package (shown in the image above) enables users to share their workspaces with invited collaborators who can join and make edits in real time.

Atom has several other powerful functions, including cross-platform editing, smart autocompletion, find and replace, and a built-in package manager. Each of these enable users to easily create and make changes in their own code as well as the program’s source code using whatever operating system they prefer.

Brackets is an open-source editor that’s designed to be both lightweight and powerful.

Brackets offers two important features: inline editors and live preview. With inline editors, you don’t have to jump back and forth between file tabs. Instead, you can open a window and put the code that you want to focus on simultaneously. So say you want to work on the CSS that applies to the ID “fancy.” Then you can hover over that ID, click “Command” or CTRL+E and all the CSS selectors with that ID will appear in an inline window.

With Brackets’ live preview tool, you can see how your code will look on the front-end before you deploy it. The only problem is that users have cited performance issues with the live preview tool, causing the application to run slowly or crash unexpectedly.

Since a code editor can help you create code faster and easier while avoiding errors, it’s a must for your web development toolkit. When making your selection, make sure its capabilities align with your needs. Whether you need a basic editor with syntax highlighting and live preview options or a more sophisticated editor with an advanced find-and-replace tool and code snippet library, the list above offers a range of options.

How to Apply CSS Padding Around Your Website's Elements