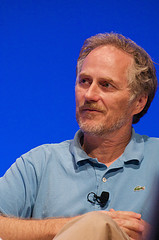 At South By South West Interactive, Tim O'Reilly took the stage for an interview with Jason Calacanis . Many see O'Reilly, the founder and CEO of O'Reilly Media Inc., as the best computer book publisher in the world. O'Reilly is also considered to be one of the premier visionaries when it comes to the Internet and the evolution of online technologies.

For nearly three decades, O'Reilly has worked as a publisher and thought leader in most new technology innovations. He began writing books for technical subjects that hadn't been covered before. These books led O'Reilly to start a publishing company. One of the keys to his publishing and writing success, he says, is being honest and clear about what technical features didn't work.

O'Reilly has established many great brands like Web 2.0 and OpenSource. Great brands have a core, he argues, they mean something. A strong brand is based on a big idea. These ideas generate interest and motivate people to move in the same direction. Building brands is about creating heroes. People want something to believe in and businesses have to tell a story to allow people to have something to hold on to.

O'Reilly says that the term Web 2.0 was about redefining the Web after the first bubble popped. Web 2.0 has been about user created content. It revolves around the idea of harnessing collective intelligence to make software more powerful and valuable.

O'Reilly thinks he has one great skill: pattern recognition. He believes that he has been able to see common threads across different situations. Because O'Reilly is all about the value of ideas, he spends most of his time asking others what they are working on in order to spot new patterns. To develop pattern-recognition skills businesses need to have employees who have an interest in people and want to learn about new innovation.  Successful businesses should spot patterns and exploit them for financial gain.

As a marketer, you should build a story that your potential customers can become passionate about. It is also critical that marketers understand and learn to identify industry patterns that are changing in order to shift strategies.