If you engage in regular ecommerce online or run an ecommerce website , you likely use and understand the importance of Amazon product reviews. Do you know where these reviews come from, and who writes them?

In this post, we break down the geographical characteristics of Amazon.com's top reviewers using an Amazon review dataset  from the computer science department at the University of Illinois at Chicago (special thanks to  @arnabdotorg   ). Which geographies drive the Amazon product review sphere, and which are under-represented?

The metrics we generated about Amazon reviews are ratios that can be understood as:

First, the states that highly over-index: 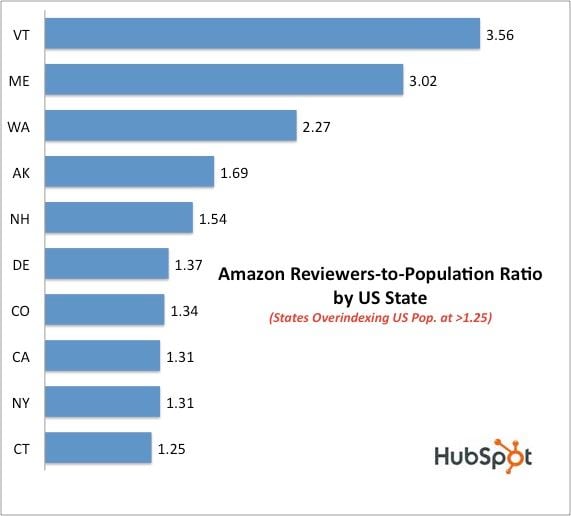 Vermont, Maine, and Washington state, followed by Alaska and New Hampshire take the lead in Amazon product reviews as compared to each state's US population contribution.

The lowest ratios of Amazon product reviewers per population contribution: 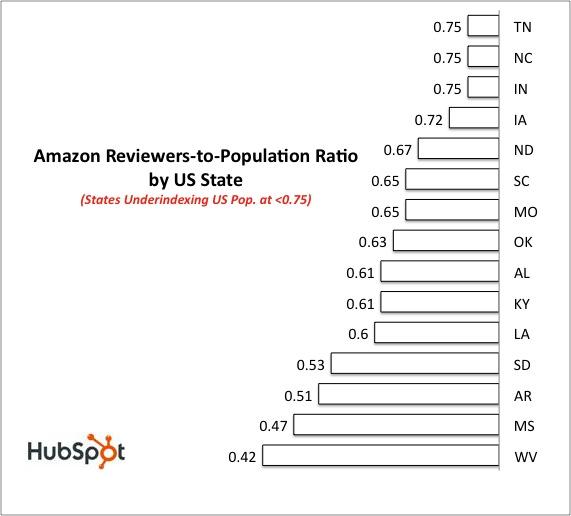 Also compiled is a full list of these Amazon-reviewer-to-US-population stats to see how all fifty states stack up.

The first correlation attempted with these ratios was to examine broadband penetration by state (as reported by the FCC: pdf link ). It turns out that the statistical relevance is quite low between broadband penetration and Amazon review concentration. This is in itself is interesting: there are other, more relevant factors to understanding why certain areas of the US have high or low relative concentrations of Amazon product reviews. Broadband Internet usage and availability is not one of these factors. 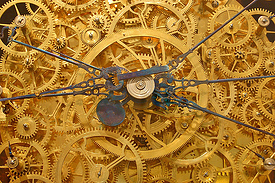 A further hypothesis is the role of geography itself. This investigation (using average state latitutde ) yielded a better correlation than the broadband analysis, but ultimately is not very illuminating. That is, it's readily apparent that the top indexing states are more northerly than the under-represented southern states. The geography hypothesis raises more questions than it answers.

The reason for this is that geography is not the defining mechanism but rather the emergent characteristic of the dataset. Naturally, it is also how the data is organized for this analyasis. As far as the actual mechanisms that cause people in Washington to write a disproportionate number of reviews as compared to hose in Louisiana, the potential answers are varied.

Could it be that colder weather and shorter days in the Winter lead to a more indoor, Internet-centric lifestyle? Does this in turn cause people to spend more time reviewing products? And what about a state population's engagement with ecommerce sites in the first place? There are myriad, intertwined micro-cultural mechanisms at work here, even if we can manage a categorization based on geography.

For ecommerce site owners and as well as consumer marketers, keep the following in mind while reading Amazon product reviews:

Everything You Need to Know About Gathering High-Quality Data

Customer Data: What to Collect and How to Put It to Work at Your Company