UPDATE: It has come to my attention that this only applies to the UK Branch of Ben & Jerry's, not their US branch. My apologies for the confusion. The articles I used for my initial research did not mention this fact, and so it was overlooked when this first ran. - Brian Whalley 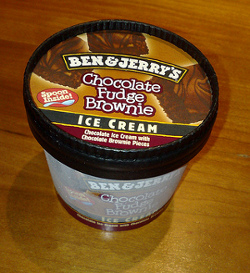 Ben & Jerry's Ice Cream of Vermont announced in an email to their subscribers last week that they will be discontinuing their regular email marketing campaigns, in favor of social media. This was a major surprise - Usually, I think of social media and email marketing as having a close relationship and that they are most effective when used together. However, Ben & Jerry's clearly feels otherwise and that their customers prefer contact through social media sites to email in their inbox. In their last email message, they invited their subscribers to connect with them via their Facebook or Twitter accounts, and this would be the last email they would receive from the famous ice cream brand.

Since this announcement, internet marketers and marketing blogs have been buzzing with the news. This is the first major corporation to completely discontinue email marketing, a mainstay of internet marketing since the 90's, for other internet channels. Ben & Jerry's customers had indicated that they disliked the email despite loving the brand, which means that it wasn't building the positive relationship that the famously brand-conscious ice cream company wanted.

Why is this working for them so well? Their presence in social media was already well established, and their fans wanted to continue the connection beyond the email. Their Facebook and Twitter profiles are already delivering tremendous value to them, and so it was easy for them to expand the energy behind those accounts. Their Facebook Page has over 1.3 million fans as of the time of writing, and they maintain several Twitter profiles (Such as @CherryGarcia and @   BenJerrysTruck ) with many thousands of followers each.

Since it is also much cheaper to tweet or send a Facebook message to that many people than to send that volume of email from a major email service provider and maintain that email marketing contract, they are also saving a significant amount of money in their marketing budget by focusing on social communication and then letting their fans spread the message for them. The cost savings was clearly a major factor in their decision to focus entirely on social media.

This doesn't mean that email marketing doesn't work, instead it means that you should listen to your customers and understand how they prefer to communicate with your business.

The Best Social Media Channels for Marketing in 2022, According to Company & Consumer Data

20 Social Media Marketing Myths to Leave Behind in 2022