Wouldn’t it be great if you could spend less money and time on marketing and sales, and still get tons of new customers? Some businesses have figured out a way to do this.  Companies like Skype, Dropbox and Google have figured out that they can get their customers do the work for them.   They've managed to build applications that 1) their customers want to share with their friends and 2) are easy to share.  These businesses prove that, if you have an exceptional product and you enable your users to invite others to use it, your product can quickly achieve viral growth. 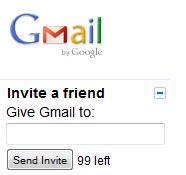 Google did this with Gmail in March 2004.  Only 1,000 people were initially given Gmail accounts.  Those 1,000 people each got a limited number of invitations to share with friends and family.  (This invitation-only model made Gmail invitations so coveted, that people started selling them for as much as $200 !)  Google finally made Gmail open to the public in February 2007, however by that time the application had already achieved viral growth.  By April 2006, just 2 years after the beta launch and still in invitation-only mode, Gmail had an impressive 7.1 million users .

So what did it take to achieve such growth in such a short period of time?  For those of you who enjoy playing with cool Excel models, David Skok recently published a great article around the topic of viral growth , which includes a handy spreadsheet containing the math.  You can use the model to project how quickly an application will gain adoption based on these variables:

I was curious to calculate what Gmail’s conversion rate had to have been in order to reach 7.1 million users within 2 years.  I ran the model for the Gmail scenario, assuming that each user invited 5 people to use Gmail and that the cycle time was 7 days.

Based on these inputs, Gmail experienced an enviable conversion rate of 21%: 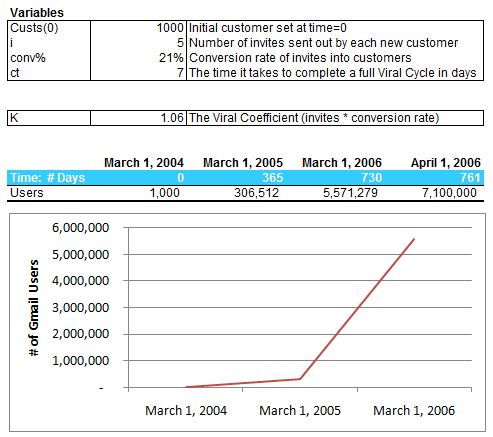 Although this kind of viral growth is elusive, you can still acheive efficient and consistent growth with the following key ingredients:

You don't have to be a software company to leverage viral growth for your business. Instead think about the problems your customers are trying to solve and create an automated way to help solve it. This is the approach we took with Website Grader here at HubSpot and it has now been used by more than 3 million people!

What can you do to apply this idea to your business?