The explosive growth in mobile usage -- specifically in app usage -- has created an ultra competitive marketplace. A whopping 1.4 million apps are on both the App Store and Google Play. In such an environment, app marketers face a difficult challenge as they battle hundreds or even thousands of direct competitors for user attention.

According to a new report from eMarketer, “the flooded app marketplace means paid install campaigns are a must.” Indeed, advertising is a big part of today’s app marketing toolkit, with acquisition campaigns attracting bigger and bigger chunks of their ad budgets. According to BI Intelligence, U.S. app install ad revenue alone will top $4.6 billion this year and grow to $6.8 billion by the end of 2019.

So if you're one of those marketers who is thinking about running, analyzing, and optimizing their very first app install ad campaign, keep on reading. We'll touch on some of most important things to know before you run an app install campaign for the first time.

Realistically speaking, the only way for apps to get noticed in a shark-infested competitive landscape is by generating a volume of installs from both organic and paid sources.

Organic installs mainly come from app store exploration or organic search. That means people discover an application after they search for a related keyword or brand search, look at top apps per category, or get a tip to download the app through an app store’s featured recommendations.

Non-organic or paid installs are installs that were driven by active promotions, especially in an advertising campaign or through an incentivized network, where users are prompted to download and install an app in exchange for virtual currency or another incentive. 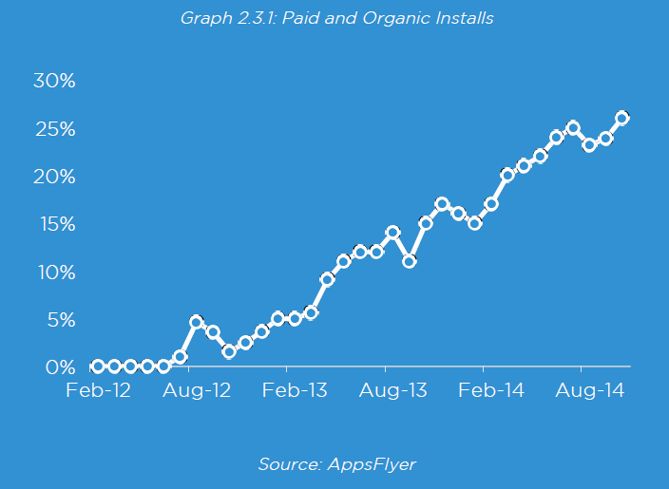 So if you're looking to boost your organic rankings, you should consider folding paid efforts into your overall promotion plan.

Before mobile took our lives by storm, tracking and measuring digital marketing campaigns was easy -- we just used cookies. Cookies enable online marketers to accurately and anonymously track users, measure the impact of their campaigns, and make smart decisions about their ad spend.

Then, the mobile revolution turned things upside down -- the cookie wasn’t supported on apps or on Apple’s Safari browser (at least not by default), which meant a large part of the market couldn't be tracked.

Without the cookie, the mobile world is deeply fragmented: there are both different operating systems (iOS, Android) and different environments (in-app, mobile web). To make matters worse, there’s no standardization. The good news is that there are ways to accurately connect the dots by using several identification methods: ID matching (e.g. Apple’s IDFA, Google Advertising ID), Google Play Referrer, and fingerprinting. 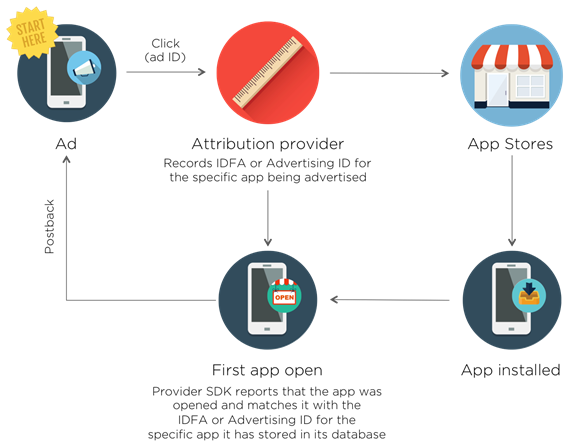 3) Beware the double or triple charge.

Today’s mobile measurement largely runs on a last-click attribution model. That means that the advertiser only pays the single network that drove the last click before the install (usually within a seven-day grace period). Attribution companies are able to do this because they are integrated with hundreds of networks and that gives them a bird’s eye view of the path to conversion.

Without this view, both the advertiser and the network would have no way of knowing which click was last. Networks that drove a click would then bill the advertiser - regardless of whether they delivered the last click or not. In this case, the advertiser would end up paying double or triple what it should pay as different networks will all claim credit for the same install.

To make sure this doesn't happen, you need to have the proper connections set up -- that way, the network is informed in real time (in what is called a postback) that it was the last click, and it doesn’t wrongly charge the advertiser. If it somehow does, the advertiser would immediately notice the gap between the invoice and the attribution data (and be able to fix it).

4) Figure out which ad network drives the "best" installs.

A common problem in app install campaigns happens when a network delivers tons of new users to an app only to find out that they’re low quality. The marketer’s user base may have grown, but many of these users may not have had any active app sessions nor completed any in-app actions. In an environment where most apps are free and therefore rely on in-app purchases to drive commercial success, that’s a big problem.

To propel business growth, a marketer needs to know not only which ad network drove an install, but also more importantly – which drove the best install (‘best’ could be determined by the highest revenue or best engagement or retention rates, depending on the marketer’s goals). This is done by continuing to follow the user’s post-install activity and in-app events, and then tying these events back to the acquiring network. When aggregated, a clear path can be easily drawn to the value each network is generating.

The following example shows the top networks sorted by the average revenue per user (ARPU) they acquired. Clearly Network 1 reigns supreme. If that’s a key goal for the marketer, he should consider increasing its budget.

5) Cohort analyses are your friend.

For marketers looking to increase the quality of their newly acquired users, cohort analysis is one of the most effective tools to help them understand user behaviors and target new user groups accordingly.

A cohort report allows marketers to group users with common characteristics together in order to measure specific KPIs for these groups over different time frames. As opposed to retention reports, this analysis allows the marketer to better compare their results.

For instance, the marketer can focus on users who came from a specific Facebook campaign in the U.S. (or any other geographic area) and measure average revenue over a day, 7 days, or even up to 30 days. They could then compare this cohort against another cohort group that came from a different source and see which source drove the highest quality users over time.

The following graph shows a cohort of users from the U.S. who installed an app in March, grouped by media source. The metric measured is the average number of in-app purchases per user. It shows that Networks A and B delivered great value with a growing number of in-app purchases from Day 5 and climbing after Day 14, while Network C generated some value but plateaued after Day 14. In this case, the marketer can increase the budget of Networks A and B, and launch a retargeting campaign with Network C starting Day 14 in an attempt to tackle the slowed growth. 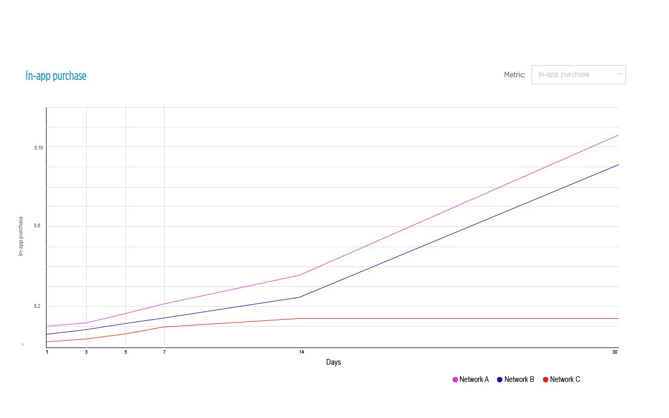 6) The “last touch” source isn’t the only one that matters.

Conversion is influenced by multiple touch points across the consumer journey -- each playing a key role in introducing a product/brand to a user, keeping the product/brand top of mind prior during the decision-making phase and actually leading a user to seal the deal.

Suppose, for instance, that a consumer saw an ad for an app on a social network, and later watched a video trailer for that app while playing a mobile game. Even though he might not have downloaded the app at that time, these touch points introduced the game and then kept it top of mind. After seeing another app install ad on another network, the user is ready to convert. She clicks on the ad, goes to the app store, and installs the app. In such a case, giving all the credit to that last network doesn’t make sense.

Flawed as last-click attribution is, it’s the industry standard. From a pure billing perspective, this is good enough since billing standardization for multi-touch attribution is not realistic at this stage.

However, just because it doesn’t impact billing doesn’t mean it lacks value. If marketers are able to measure the most common conversion paths that lead users to install their apps, they should continue to invest in these contributing networks. After all, these networks drove users down the funnel and made them “sales-ready.” If it weren’t for their presence, the user may have never converted. 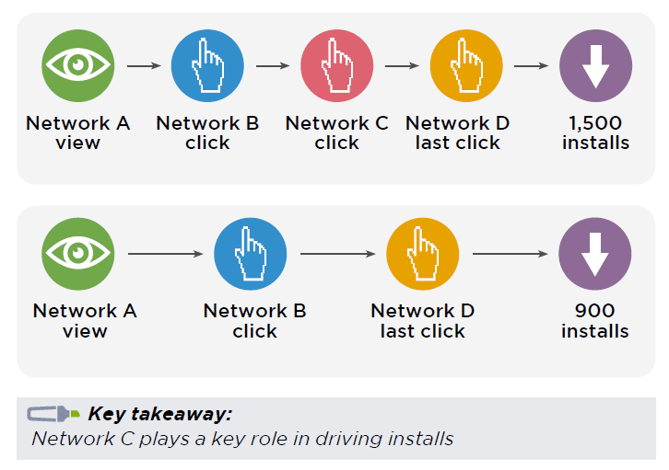 So marketers should keep the full-funnel in mind when making app advertising decisions. For example, if you choose to cut all budget from one network, you should look to see how conversions change on the other networks.

7) Use deep linking in your ad campaigns for a better user experience.

Deep linking is the technology that enables developers to send a user to a particular part of their app, similar to the way that URLs allow a user to go to a specific page of a web site.

With deep linking, the developer can use ad creative and calls-to-action that send the user to a specific app screen that is actually tied to the campaign in question, rather than the app’s home screen. This creates a non-disruptive user experience with higher engagement.

Take, for instance, the case of a hotel reservations app that wants to serve ad campaigns targeted to users based on what city they happen to be in. The app marketer could promote a 50% discount for the user to find a hotel room in San Francisco that night, and then, using deep linking, steer them to the section within their app that lists all hotels in San Francisco. The same process could be used by an ecommerce app to promote a specific line of clothing, or by a movie-streaming app to promote a specific movie, and so on. 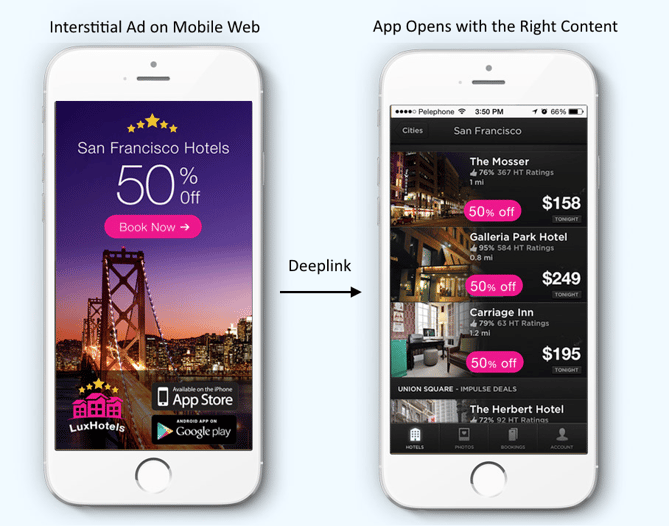 Deep linking allows marketers to get much more personalized and targeted with their ad campaigns, which leads to better conversions and a higher quality experience for users. And all of it is trackable thanks to the custom URLs enabled in the deep linking technology.