If social media teams at universities want to target the college demographic, they need to start by understanding and adapting to students' social media habits. Universities are lucky to already have a built-in community -- and Twitter is a great place for them to inform and engage with students, prospective students, alumnae/i, and faculty.

There are many universities doing well on Twitter, but we've curated 14 of the best ones we saw.

The social media team at MIT knows their audience. Most of the folks who follow them are interested in cutting-edge science, mathematics, and technology. From research studies to nerdy anecdotes (like the one below), they deliver great content that's catered specifically at their niche audience.

The key here is letting your personality shine by tweeting funny and interesting content along with more official content. Remember: People are on Twitter to be informed and entertained.

The social media team at Indiana University, Bloomington tweet out a lot of content -- but it's obvious that their posts are well thought-out in advance. For example, on Veterans Day in the U.S., they posted multiple tweets showcasing students connected to the cause. One tweet linked to an article about an IU law student who uses education to help her fellow veterans. The tweet below links to an article about a student's transition from veteran to student. All these tweets include cool, custom graphics.

Their team likely uses a social media content calendar to plan their social media strategy well in advance for events like this one.

We love the conversational style of the University of Glasgow's Twitter feed. A tweet that could've said, "@GUCareer Fair for the sciences today" instead said, "Interested in a career in the science sector? Reminder to pop along to @GUCareers Fair TODAY [link]." They make the tweets about their followers -- something that, while it seems straightforward, many universities fail to do in their tweet copy.

They also do a great job of integrating video content into their tweets. Here's an example of a simple but uplifting Vine video of campus on a rainy day.

Finally, they run fun contests that encourage engagement on Twitter. Their contest below had a particularly punny name: #UofGtrickortweet.

The University of Wisconsin-Madison's tweets cover the gamut of what you'd like to see on a university's Twitter account. Their feed is a combination of timely posts (like tweets congratulating new students and award-winners), links to blog posts on UWM's news site, cross-promotion with their other social media accounts, and informative posts, like one tweet announcing how street traffic will be affected during a local marathon.

We love the playful tone of some of their tweets and their use of images and even GIFs, which speaks to how well they know and cater to their audience. After all, tweets with images receive 18% more clicks, 89% more favorites, and 150% more retweets than tweets without images.

That moment when you hit “enroll” for that perfect Spring schedule. ⏩Enrollment tips: https://t.co/jNMiCkAuBm ⏪ pic.twitter.com/fevwFcfaxm

Not only is Georgetown's Twitter account chock full of interesting text, pictures, and links, they've done a great job experimenting with other cool formats that many colleges haven't taken advantage of -- not yet, at least. The tweet below is a great example of this experimentation: It features a fun, student-made video that links (in a CTA directly on the video itself) to the school's #GeorgetownStories campaign, which is already a really cool social initiative.

Joong Won (MSB'18) shows us one of his favorite campus spaces, the Rafik B. Hariri building. 💯 #GeorgetownStories https://t.co/u8JVGvjMDD

Georgetown's use of video in tweets follows a trend Social Media Examiner saw coming: When they asked marketers which form of content they most wanted to learn about in 2015, producing original videos came in second after creating visual assets.

Princeton gets the information for their tweets from a wide variety of different places. They post about everything from school history and events like theatre performances and sports games, all the way to faculty accomplishments and research opportunities for students. We love that they include the official #PrincetonU hashtag right in their Twitter bio.

Speaking of hashtags, they run a lot of cool social campaigns they encourage students to participate in, like #PUSocialDay:

The length of the #PUSocialDay hashtag is perfect: As it turns out, hashtags with 11 or more characters get 117% more retweets than those with between 6–10 characters. Keep this in mind for your next hashtag campaign.

Finally, Princeton's social media team uses Twitter effectively to cross-promote other social media channels their students are using, like Snapchat. After all, 77% of college students use the Snapchat app at least once per day, according to a study by Sumpto.

The first thing you'll notice when you go to Stockholm Universitet's Twitter page is their gorgeous cover photo. While most universities feature a picture of campus or a stock-like photo of students in a study group laughing hysterically, these folks created their own custom graphic that striking and colorful. The school's tweets themselves have a great balance of text-only tweets, picture tweets, retweets, and even retweets with comments.

Ohio State University's Twitter feed is filled with a breadth of relevant information for students, faculty, and alums. The post everything from football game announcements (with great custom graphics displaying all the information about each game) to daily photos to links to articles in the student newspaper.

At the same time, they retweet a lot from their alumni account, athletics account, emergency services account, and others -- making their feed a great source of information for OSU followers looking for pertinent information.

They find room for some fun, though. Their #ThrowbackOSU hashtag, for example, gives followers a cool glimpse into the school's history:

We love how the Universidad de Buenos Aires uses a custom graphic with a tasteful amount of text overlay for their cover photo. Notice how they optimized the text in the graphic for Twitter: Knowing the main profile photo would appear on the left side, they placed text high up on the left and lower down on the right. They also chose an image that just enough negative space -- the more, the better, as busy photos will make the text difficult to read.

They do a great job of creating custom graphics for their tweets, too. For example, the tweet below gives information on getting a graduate degree in agribusiness. There's too much information on there to fit into 140 characters, so they put the relevant text in a colorful graphic, and linked to the image in the tweet instead.

The folks at Universidad del Valle de México do a lot of great things on their Twitter account, but they do three particularly well: use visuals to promote events, use hashtags effectively, and engage students. For example, the tweet below is a reminder for students to join and participate in the Wobi conference the university is hosting, whether it's by coming in person or engaging in conversation online using the official event hashtag, #WOBIUVM.

The folks at Ruhr-Universität post tweets about a wide variety of things -- especially news content curation, events happening on campus, and posts from students like videos, photos, and art projects.

Visual content drives more traffic than plain text, and they're very adept at using visuals in their tweets. The tweet below, which they pinned to the top of their profile (a great move we haven't seen from many other university), includes a beautiful video timelapse of their campus -- a topic that will appeal to any and all of the university's target audience members.

One clever way to use your Twitter cover photo? Use it to highlight an upcoming event. It's the first thing people see when they visit your Twitter page, making it a great opportunity to spread the word. While the cover photo above is what'll appear on NUI Galway's account on a normal day, check out the cover photo they used to promote Postgraduate Open Day

Even in the first, "normal" screenshot, though, you'll notice that the main profile photo has a little addition overlaying the main image: a heart and the words "Gaillimh 2020 Galway." Here it is up close: 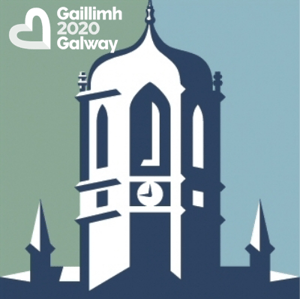 That's a nod to an initiative the university heavily supports: Galway's candidacy for the 2020 bid as the European Capital of Culture, a European initiative to highlight the rich diversity of cultures all over Europe.

Butler University's Twitter account isn't just there to inform students of events, news, and other official information. It's also a source of entertainment, thanks to posts that showcase a personality college students can relate to. For example, students use emojis in their tweets all the time... so why wouldn't their universities?

Here's another example of a great, witty tweet (and we applaud them for experimenting with new Twitter features):

At last, @ButlerMBB is back. Are you:

Here's another university with a cool cover photo: a collage showcasing a wide range of student activities. The collage conveys a message perfect for a liberal arts school: No matter your passion, you'll be able to pursue it there.