Everything You Need to Know About Billboard Advertising

Plan and launch an effective and profitable advertising campaign with this guide and set of templates.

I don’t own a car in Chicago, but I do take the train (referred to as the “L” here). On the L, most of my commuting companions pass the time by looking at their phones. But, my motion sickness prevents that, so I typically find myself watching the world — and many, many billboards — go by.

And I must say: Some billboards can be very, very entertaining.

Plus, if companies like MINI can incorporate inbound marketing elements in their billboard advertising, you can, too!

Billboard advertising is the process of using a large-scale print advertisement (a billboard, or a hoarding to those in the UK) to market a company, brand, product, service, or campaign. Billboards are typically placed in high traffic areas, such as along highways and in cities, so they’re seen by the highest number of drivers and pedestrians.

Billboard advertising is effective for building brand awareness and broadcasting your business (or product or campaign) to as many people as possible. Because they’re in such busy areas, billboards tend to have the highest number of views and impressions when compared to other marketing methods.

The cost of billboard advertising depends on many factors including the location of your billboard, the total traffic in the area, and how many people are estimated to see your advertisement. Billboard advertising costs are typically charged monthly and range anywhere from $250 on a rural highway to upwards of $22,000 in Times Square.

Billboard advertising is categorized as out-of-home (OOH) advertising, which is any advertising that reaches consumers when they’re outside their homes. Each OOH advertising opportunity (e.g. individual billboard) is given an OOH rating, which ultimately determines its value and the subsequent cost to advertisers.

Geopath is a nonprofit organization that uses technology and media research to estimate the weekly impressions of every billboard in the country and give OOH ratings. (OOH advertising companies [e.g. the companies that own the billboard spaces] pay Geopath for this data to share with potential advertisers.)

According to Geopath, there are up to 10 determining factors that make up an OOH rating and, therefore, the cost of each billboard advertising opportunity.

Here are the three main factors:

If you outsource your billboard design, expect the cost to range from $150 to $1000, depending on what agency or designer you choose, as well as the complexity of your desired design. If you’d like to design your own, however, check out the billboard design tips in the next section.

If you’re going to invest in an advertisement potentially seen by millions, you want it to do its job. Here are a handful of billboard design tips that’ll ensure your billboard is effective and eye-catching.

Successful billboards take viewers on a journey … even if that journey is a four-second glimpse over the steering wheel. Most billboard designs tell this story with imagery and possibly some text. In fact, most drivers stop reading after a few words. Use your billboard to convey the essence of an idea or campaign rather than describing it with text.

Take a look at this text-less billboard by Samsonite. It tells a story that Samsonite luggage lasts a long time, even longer than a billboard. 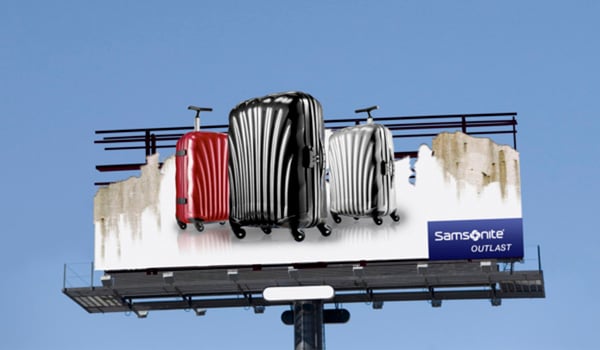 Make it bold and simple.

Drivers or passersby only have a few seconds to get a glimpse at your billboard advertisement. To reach the highest number of viewers (and potential customers), keep your billboard design simple. After all, some people may be blowing by your billboard at 70 mph. Use big, bold fonts against contrasting background colors and avoid narrow, script fonts.

Also, choose colors that stand out to viewers. If your billboard is in a rural area, avoid greens, blues, and browns. Check out this bright, bold (and funny) billboard by Lamar. 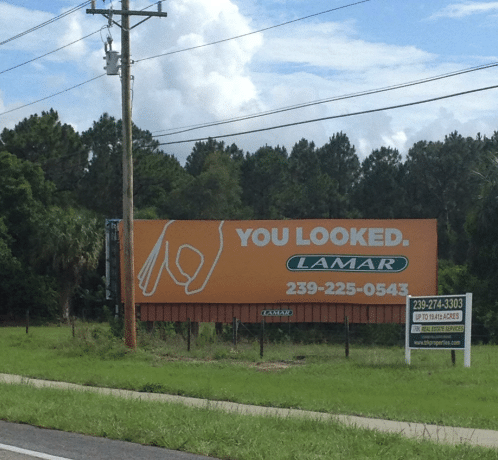 I’m not originally from Chicago, but I’ve been here long enough to foster a certain sense of pride. So, when I pass by billboards that play on the Cubs or Bears, or make jokes about the wind or traffic, I pay attention.

Well-designed billboards are reflective of their location. They take advantage of sports teams, nicknames, nuances, or inside jokes related to the area. This can make the billboard (and brand) much more impressionable to those who see it. Check out this billboard by SmileDirectClub in downtown Chicago. 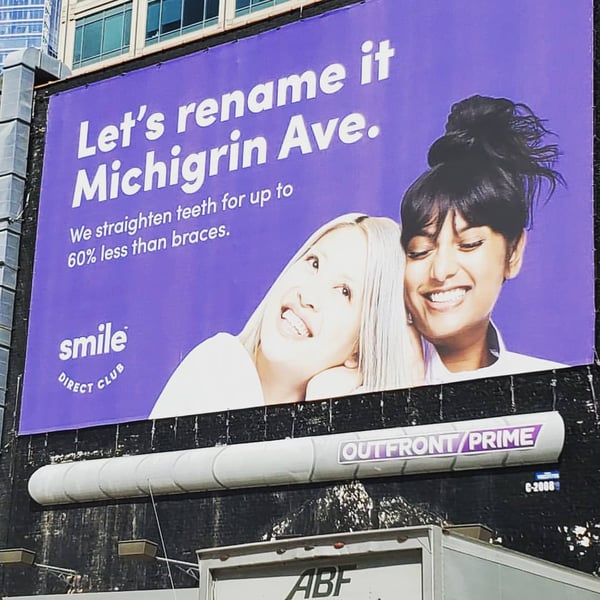 This billboard, advertising the new Grinch movie, is in New York City.

Depending on your billboard's location, you may be able to design it so it interacts with its surrounding environment. This strategy make your advertisement stick out among the noise and grab the attention of passerby (which we’ll talk about more in the next section).

Take a look at this Panasonic billboard that interacts with the wires around it.

Even if your billboard isn’t in the city, there are ways to leverage the environment around it. This billboard by Koleston Naturals used the sun to “color” the hair in the advertisement. 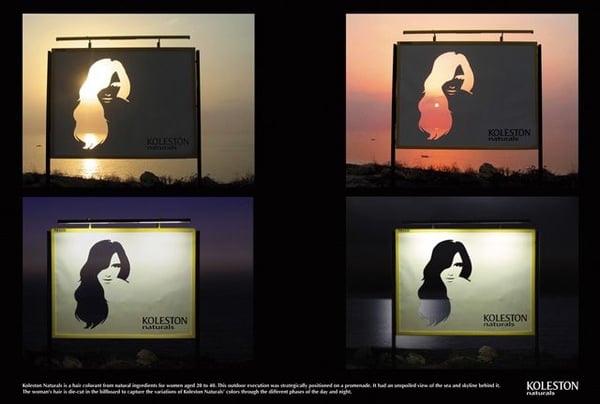 OOH advertising has to be creative in order to stand out among the hustle and bustle of a regular commute (or the monotony of a long road trip). Your billboard shouldn’t be any different.

Your billboard needs to tell a story and/or share a call-to-action in a way that’s interesting and memorable. Whether you call on humor, anger, empathy, or cleverness, use emotional marketing tactics in your billboard design to make it memorable. Take a look at these examples of eye-catching, creative billboards.

This example, established by the Colorado State Patrol, warns drivers of the effects of tailgating. 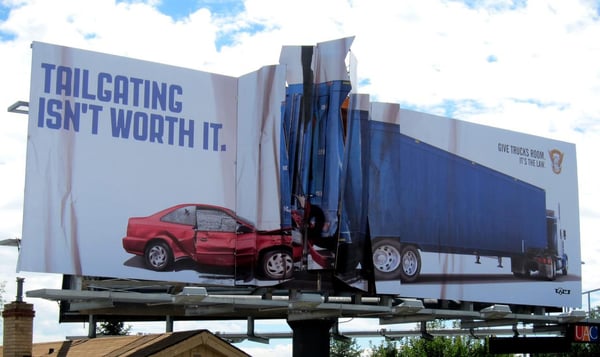 This one, advertising strong tape, is by Penline Stationery. 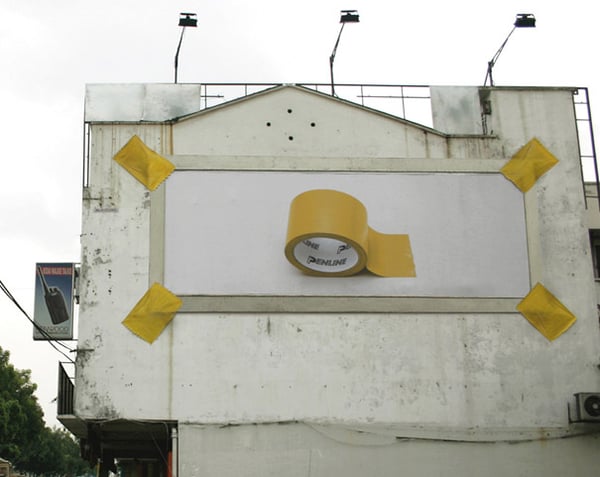 Coca-Cola designed this one to encourage people to drink Coke. 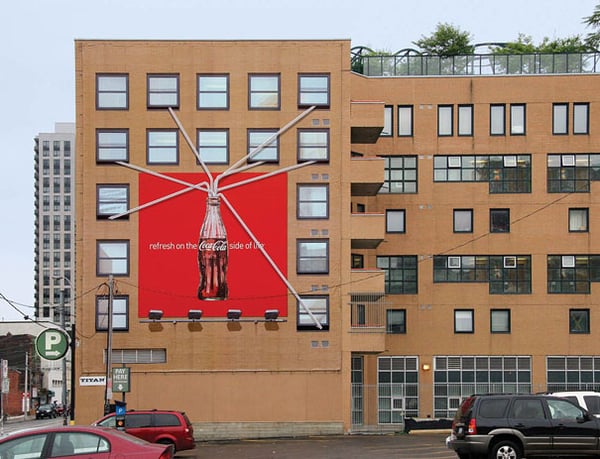 We’ve looked at some amazingly creative billboards and discussed how to design one of your own. At this point, though, you may be wondering: Do these billboards actually work? Do they reach the members of your target audience?

Billboard Advertising: The Marketing You Never Knew You Needed

Billboard advertising might not fall under the hood of inbound marketing methodology, but it can still be a highly effective way of promoting your products and boosting your brand. It can also work to strengthen other inbound marketing efforts you’ve invested in, such as blogging, online lead offers, or SEO.

Follow our billboard design tips above to create an impactful, memorable billboard for your brand. And, who knows? Someone may look out the window during their next commute and see your billboard — and become a new customer.