Design Disruptors: The Story Behind One Startup's Decision to Produce a Feature-Length Documentary

Many a marketing team, big and small, has gathered around a conference table to brainstorm a list of crazy ideas. You know what I'm talking about -- those "big, hairy, audacious goals" discussed so often that they've earned a place in the business lexicon.

Much more rarely, though, do teams actually execute on these crazy ideas.

David Malpass and the folks at InVision are the exception. Not only did the small marketing team from the growing startup take on the challenge of creating a feature-length documentary, but they managed to release a trailer in less than a year's time. A trailer that has garnered international attention, might we add.

Why take on something so ambitious? Quite simply, they have a story to tell that they want to get out to as many people as humanly possible.

Their documentary, Design Disruptors, will be released for free in early 2016. And as for the story they're so keen on telling? Well, spoiler alert: It's about design.

With no forced connection to the InVision brand, the documentary will explore how design has risen to become one of the most important roles in modern business. So much so that companies like Facebook, Twitter, Netflix, AirBNB, Spotify have all prevailed in a world rife with pop-up competitors -- all because they've placed an emphasis on a top-notch user experience and great aesthetics from the very beginning.

To uncover more about idea's inception, the company's intentions, and how this project has taken shape over the past year, we took some time to chat about the upcoming documentary with Mallpass, InVision's VP of Marketing.

When Malpass joined InVision as their VP of Marketing in July 2014, it became instantly apparent that, across the company, InVision innovates by doing the unexpected.

For the InVision team, the film was a powerful, long-term project that could happen in the background. In other words, they'd outsource the filming, editing, and so on, while focusing their efforts on constructing the narrative and planning promotion for the release.

"Our content is the backbone of our marketing," Malpass told me.

"We're always ambitious and innovative with the content we're putting out there -- whether it's blog content, ebooks, webinars, and so on. We never sacrifice quality for quantity, so this [documentary] is the ultimate example of the team going big, doing something very ambitious, and setting the tone for the content we put out in the future," he went on to explain.

InVision has always encouraged these big ideas. Companies may not do big things like this because there's risk involved -- but if you're comfortable with introducing a bit of risk into the equation, you can often achieve exponentially greater results. 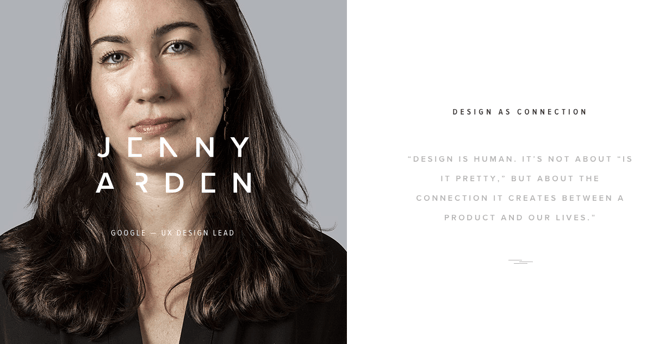 Is This a Marketing Play?

Going into the conversation with Malpass, I was fascinated with the concept of creating a documentary to market your company and your product. How was the film was connected with the InVision brand? How are they using it to sell their product? Where are all the calls-to-action going to be?

I quickly found out that the film isn't actually connected with InVision in any overt way. Nothing in the film or the trailer or the website directly promotes the InVision brand. It lives on its own URL, where the only clues that it's linked to InVision are a subtle mention on the page and the shortened URL in the click-to-tweet buttons. The Design Disruptors URL isn't linked to anywhere on the InVision website, either. In fact, the company isn't even mentioned in the film itself.

Why did the folks at InVision choose to spend so much time and so many resources on a documentary if they weren't going to use it to market their company? Why wouldn't they just write an ebook or something?

"We're not trying to sell our product. We're trying to bring attention to the increased importance of design in a company's success," Malpass explained.

"A lot of our work is based on doing things that'll create a positive effect on the design community and that will elevate the role of the designer within their organization."

They are, after all, giving this documentary away for free. When it's released in early 2016, it'll be shown for free online at the Design Disruptors website, at movie theatres, and on Netflix.

That's not to say the documentary won't benefit InVision in any way. Given that their community is comprised of smart, passionate designers, this documentary serves as a great opportunity for them to educate their audience by showcasing some of the industry's most talented minds.

He added it's also positive for InVision because they're the platform that most of the companies in the film go to for their design process, of course.

As for why they didn't write an ebook instead, Malpass says the goal is to get this story in front of an audience that expands beyond designers and businesspeople. While an ebook or a webinar would reach InVision's target audience, they wanted to break out of those limits to reach people who wouldn't otherwise be exposed to that content.

"A designer came to me and said, 'My mom saw the trailer and she called me and asked me if that's what I do,'" Malpass told me.

In other words, Design Disruptor's target audience includes designers and their moms.

The great thing about ebooks and webinars is that people sign up to see the content, so marketers can collect email addresses and capture leads. When you're giving away a film for free, how do you measure its success?

Since releasing the trailer in early October, InVision's growing marketing team -- which has gone from three to twenty-five since Malpass joined -- has already seen an overwhelmingly positive response.

"Design Disruptors" was trending on Twitter for three days, and at one point, it was the fourth most tweeted thing in the world. However, other than social shares, site visits, and articles written about the film, most of the film's success is intangible.

"We want designers to feel empowered to share this film with their organization, and for non-designers to recognize their success and elevate them," explained Malpass.

"Oh, and it's got to have a good score on IMDB," he joked. "No one wants to look back in ten years and have made a bad film."

For a sneak peek at the documentary, you can watch the trailer here.

Top Presentation Design Trends of 2021, According to Creative Experts