The Future of the Office: 7 Innovative Ways Companies Are Changing the Workplace

W. Clement Stone once said: "You are a product of your environment. So choose the environment that will best develop you toward your objective. Are the things around you helping you toward success -- or are they holding you back?"

That's what facilities managers and office managers around the world are asking themselves about the office spaces they're responsible for organizing. How can they set up a space that's not just a place to shelter all your employees, but one that's a strategic tool for productivity, collaboration, and growth?

What makes an office environment great is different for every company. A lot of it has to do with a company's culture and how employees there like to work. And the right office environment can set employees up with the right situation and motivation to tackle big, important projects (like getting inbound certified, perhaps?).

Want to get inspired by examples of what your workplace could look like? Check out the post below.

Thanks to wireless internet, laptops, and tablets, employees are finding they don't necessarily need to be chained to a single desk. Instead, they can move around their space more, technology in tow. And some companies have taken this to the next level by eliminating personal desks and opting for a configuration called "hot desking."

Hot desking simply means no one in the office has an assigned desk or seating area. Instead, when you come in to work in the morning, you can sit anywhere you please -- from open tables or desks set up with cables and monitors, to more public spaces like couches and chairs. For this to work, a company should take special care to create spaces in the office that can easily be reconfigured for different tasks and evolving teams.

The financial services and mobile payment company Square has done some experimentation with hot desking. In an Inc interview, Maja Henderson, Square's global facilities manager explains why hot desking has worked for them:

We don't want our employees sitting in one chair all day, because that's not good for them and it's not good for collaboration. We just get these really great intersections of people and ideas ... Suddenly and randomly, we'll have these conversations with people from finance, legal, design, and you get these collaborations that wouldn't otherwise occur. I love how flexible it is, and that there are always different people sitting at my desk. It makes me feel more in touch with my co-workers and what's going on in the company." 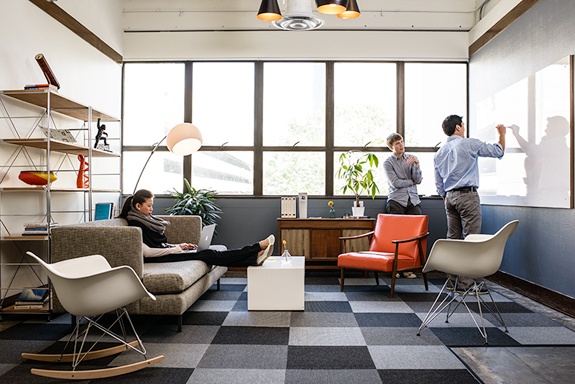 But be aware that hot desking may not be an effective way to create movement in the office. One study found that when people didn't have an assigned desk, they didn't move around more; instead, they would find a place to work and then stay there for the rest of the day. So, while interaction among employees did increase by 17% in the study, the number of individuals' encounters during the day actually dropped by an average of 14%. As a result, team communication actually dropped by 45%.

... You could do what Skullcandy did at their international office in Zurich, Switzerland, and use desks that can be reconfigured to work individually or collaboratively. Desks there fit together like puzzle pieces and can be moved, reworked, and reattached as employees see fit -- a nod to the values of modern office design, which include mobility, flexibility, and collaboration. 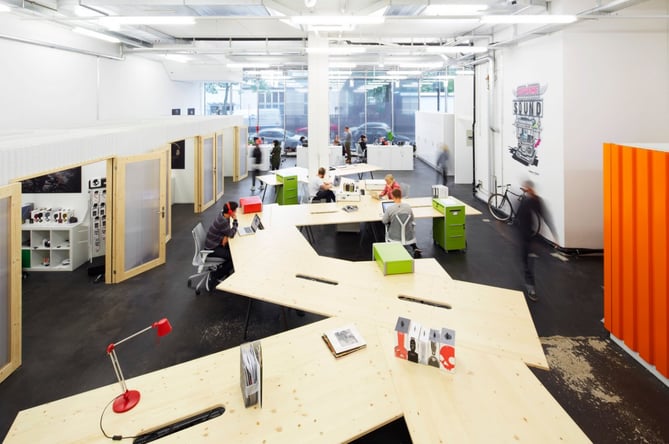 Research from the University of Michigan showed that when scientists worked in a space where they ran into one another -- in areas known as “zonal overlap" -- they were more likely to collaborate. The data suggests that creating opportunities for unplanned interactions among employees both inside and outside the organization actually improves performance.

The most creative ideas aren’t going to come while sitting in front of your monitor,” said Scott Birnbaum, a VP of Samsung Semiconductor. That's why the folks at Samsung made plans to build an office that includes large outdoor areas sandwiched between floors that encourage employees to hang out and mingle in shared spaces. According to Birnbaum, the new space is "designed to spark not just collaboration, but that innovation you see when people collide."

The main staircase at ad agency Grupo Gallegos' office is another great example of a zonal overlap. To inspire more collaboration in their office, they started by knocking down walls and barriers to give more "visual connectivity. The stairway is a place where you can often find employees sitting down and having informal meetings. 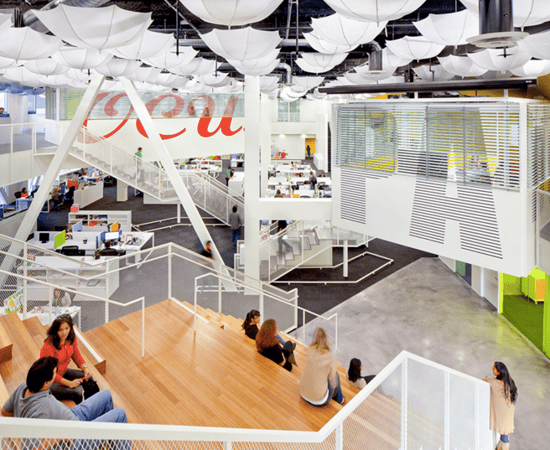 Zappos purposefully planned to build a smaller office for their U.S. headquarters to increase the metric they call "collisionable hours" -- in other words, the number of probable interactions per hour per acre. In the University of Michigan study, scientists working in a smaller space increased collisions by up to 20% for every 100 feet of "zonal overlap." So Zappos decided their headquarters would allot about 100 square feet per employee, as opposed to the 150 square feet that was originally in their plans.

At LinkedIn's headquarters in Mountain View, California, employees can jam out in a music room that's stocked with high-end music equipment like drums, guitars, keyboards, AV equipment, microphone stands, and even stage lighting. Check out the garage doors on the left in the picture below: When the weather's nice, they can open those doors and play an open-air show.

"While the benefits to employees are obvious, we have uncovered many benefits to the company as well," Michael Oliver, the former engineering director at LinkedIn who helped build the room back in 2010, wrote in a LinkedIn article. "Musicians perform, which improves the office culture. The program improves the company’s marketability to potential employees, especially musicians, both as a specific perk and also as a 'think different' means of demonstrating our commitment to fun.

Bullhorn, a recruiting software firm out of San Francisco, also has a music room -- converted from a conference room -- where employees can jam out at their leisure. It's equipped with four guitars, three amps, a bass, a bass amp, an electric drum kit, a keyboard, three microphones, and two PAs. 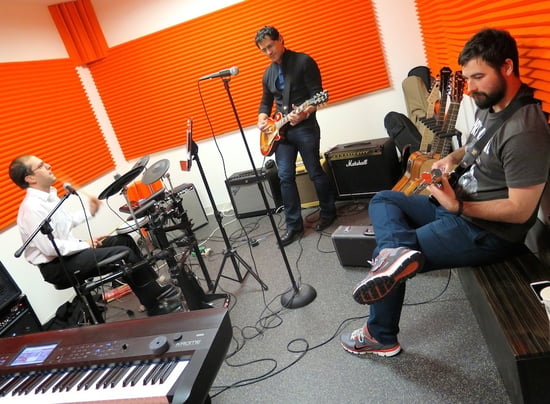 To ease the landlord's concerns over noise complaints, they hired an architect to figure out how to completely soundproof the room -- although they still have a rule where sound levels need to stay at or below 90 decibels (which is about as loud as a jet engine at takeoff).

5) Pets in the Office

Whether or not allowing pets in the office boosts or hinders productivity is an often-debated topic. But there are a lot of companies out there that do allow folks to bring their pets to work, and they have a lot of good things to say about it -- it improves work-life balance, serves as a social catalyst, and helps people de-stress.

For example, letting people bring their pet to work means those people don't have to worry about leaving their pet to sit at home all day or paying a dogwalker. It also eliminates the worry of rushing home at the end of the day to feed or let a pet out -- so they can focus more on work and getting stuff done later than usual if they need to.

Pets are also a great facilitator in de-stressing and creating social relationships among employees. Jennifer Williams, who manages operations at a New York ad agency, said having dogs in the office helps "create a moment of separation from the chaos of the day."

In fact, a Virginia Commonwealth University study found that employees who bring dogs to work produced lower levels of the stress hormone cortisol. In the study, as the workday progressed, the employees who'd brought their dogs to work experienced a decline in stress levels of 11%, while those who didn’t saw their stress levels rise by up to 70% by the end of the day.

Finally, office pets -- especially dogs -- give owners an excuse to take a break, which has been shown to be restorative and boost productivity later on.

Designing an office space around the "open office" concept is one thing. But what about creating a shared desk for your company's entire staff?

To represent their collaborative approach to work, the folks at the Barbarian Group built a 4,400-square-foot desk that weaves through their 20,000-square-foot office headquarters in New York City, which can sit up to 170 people at once. 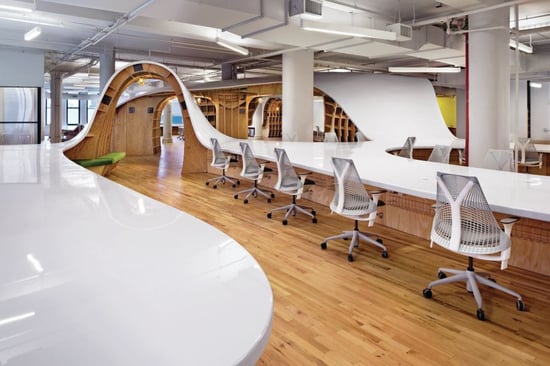 For employees who want to work in a quieter space or have more private discussions, the desk lifts into large arches that have seats built underneath them. 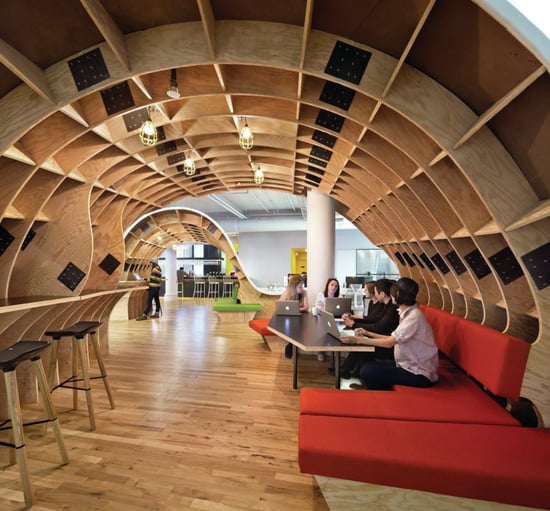 “The coffers of the arches themselves offer acoustic privacy, and then within them we put acoustic insulation,” said Chester Nielsen, an associate at CWA, the company that created 3D computer models of the desk. 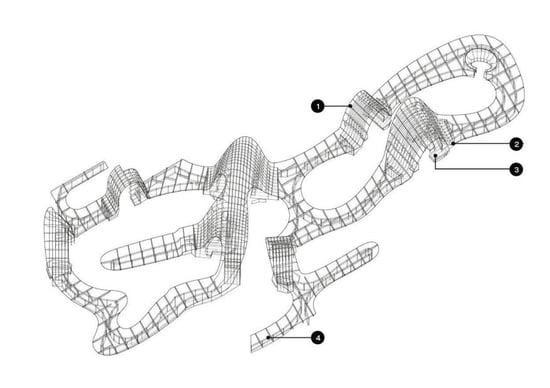 Not only did the desk's design help CWA win an award for interior design, but it also became a symbol of collaboration and innovation for the Barbarian Group itself.

It isn't too hard to believe that spending time around nature and sunlight and fragrant greenery is good for the soul. But now, there's scientific research to back that claim.

Researchers have found that adding plants and greenery in an office can help increase employee productivity by 15%. “A green office communicates to employees that their employer cares about them and their welfare,” said Psychology Professor Alex Haslam, who co-authored the study. "Office landscaping helps the workplace become a more enjoyable, comfortable and profitable place to be.”

Some companies have even started investing in installing plants and greenery around the office help make their employees happier and healthier (and boosting productivity at the same time). For example, Google's office in Tel Aviv, Israel has an indoor orange grove that turns an otherwise normal, collaborative space into a relaxing area that makes you feel like you're sitting outside on a park bench. 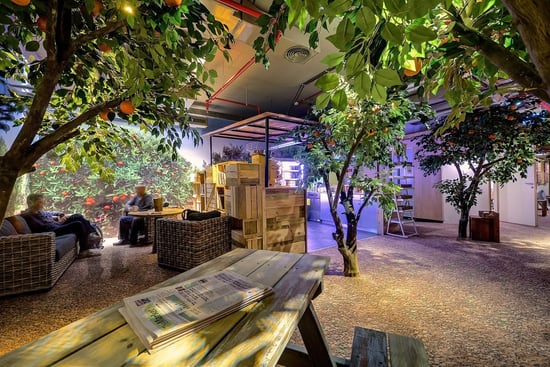 Venray installed a hanging garden above its conference table. 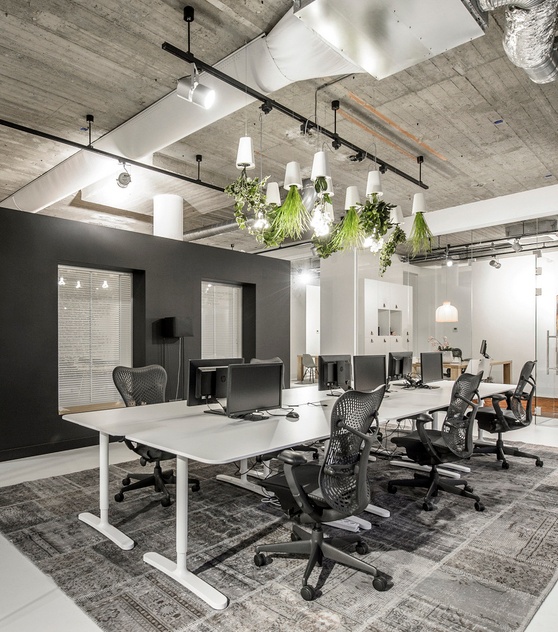 Plus, all those live plants in the office need natural light -- and natural light does a great job to diminish monitor glare and reduce eye strain, says Teri Ianni Driscoll, director of marketing for a company called KA Inc.

That the same study, employee productivity went up even in offices where there was landscape imagery or large windows with views of the outdoors. We've seen this first-hand at HubSpot -- we have a few rooms with wallpaper mimicking the outdoors: 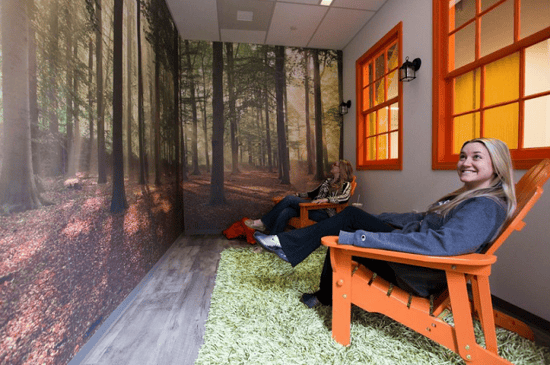 Other health benefits of decorating with plants and greenery? NASA reported that live plants can have a significant impact on reducing toxic chemicals in the air emitted from furniture, rugs, and so on. For those interested in decorating air-cleaning plants, the best ones include Boston ferns, Kimberley Queens, and palm trees. 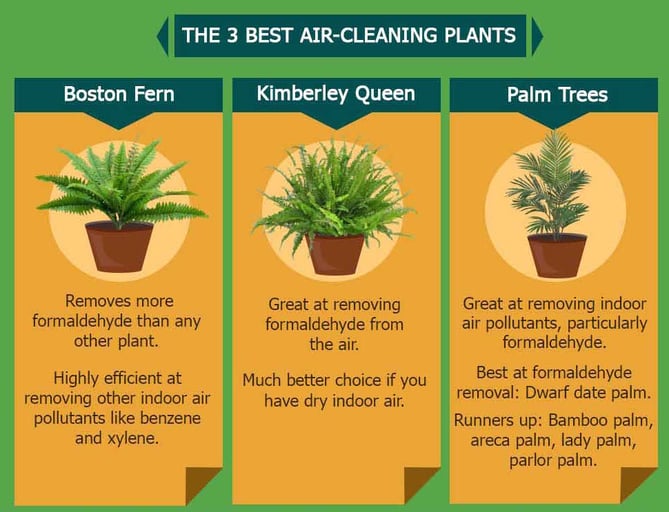 And that's it: a collection of the latest office designs sweeping the business world. Now, over to you: What designs do you think companies should implement in the future?