It’s graduation season once again, which means a new batch of college graduates is eager to get their diplomas, and a new round of commencement speakers is excited to receive their honorary degrees and impart wisdom on the new graduates before they disperse into the “real world.” 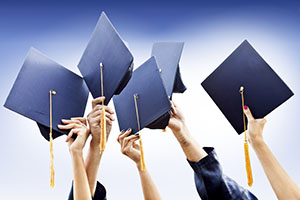 Beyond all of the pomp and circumstance, the typical commencement clichés, the jokes about hangovers and not remembering who the commencement speaker is, there are some truly remarkable and timeless graduation speeches that will be remembered for a long time to come by people of all ages.

This article will provide a roundup of some of the best graduation speeches of the 21st century, as well as a few highlights and key takeaways that I think anyone in our industry can really benefit from. Enjoy, reflect, and take notes!

Charlie Day is a television actor, producer, and comedian. He is best known for work on the hit sitcom “It’s Always Sunny in Philadelphia,” which is on track to be one of the longest running sitcoms of all time. His commencement address at his alma mater offers various life lessons based on experiences from his own life. Beneath all of the humor are some important life lessons about taking risks, success and failure, and overcoming fear. Some of the best takeaways for marketers:

In his 2011 commencement address at Dartmouth College, Conan O’Brien manages to poke fun at Dartmouth for its inferiority complex, insult all of the Ivy League schools except for Harvard, Yale, and Princeton, suggest groundbreaking policy, and still find the time to impart wisdom on the graduating class. Through a remarkable combination of wit, humor, and originality, Conan discusses evolving dreams, failure, and the importance of not trying to be like everyone else. My favorite quote from the speech that I think business owners and entrepreneurs in particular may find inspiring:

"It is our failure to become our perceived ideal that ultimately defines us and makes us unique. It’s not easy, but if you accept your misfortune and handle it right, your perceived failure can be a catalyst for profound reinvention."

In her 2008 commencement address, J.K. Rowling delivered her speech entitled “The Fringe Benefits of Failure and the Importance of Imagination.” Throughout her speech, she offered riveting stories based on her own experiences to illustrate the things that people can learn about themselves through failure, as well as the role of imagination in changing our world for the better. Here are some of her highlights:

Michael Lewis is the author of the best-selling books Lair’s Poker and Moneyball. His 2012 commencement address focuses on the motifs of success and luck and the profound connection between the two. Through anecdotes from his own life, Lewis illustrates the fascinating idea that all success is accompanied by some degree of luck. For those successful folks out there that can poke a bit of fun at themselves ... a takeaway:

"Success is always rationalized because successful people don’t want to acknowledge that they were actually just really lucky."

At the time she delivered this speech, Marissa Mayer was an executive and spokesperson at Google. She is currently the CEO of Yahoo, where she has been since 2012. Her address offers personal stories, and both insightful and practical advice about topics ranging from the importance of asking the right questions, to surrounding yourself with the right people, to finding the courage to do things that are uncomfortable, and the power in sharing information. A few things she recommends that I think anyone in business can stand to be reminded of:

Denzel Washington begins his speech discussing failure and the importance of taking risks, like many of the other speakers on this list. His most unique and interesting point comes later in his speech when he talks about the notion of having something to “fall back on.”

Rather than underlie the importance of this cliché, Denzel offers an interesting, alternative perspective. Arriving at the central thesis of his speech, Denzel explains that if he is going to fall, he wants to “fall forward.”

Although at first this seems like it is simply an optimistic take on the traditional cliché, he then offers two anecdotes to illustrate his point and to really make it resonate with his audience. He, almost poetically, proclaims:

This is easily the most famous commencement speech on this list. In this renown address, Jobs shares heartwrenching stories from his personal life about his first days in this world, being fired from Apple, and grappling with illness, in order to tackle topics like connecting the dots, love and loss, and even death. Here are some of the most notable moments:

Admiral McRaven is the ninth commander of the United States Special Operations Command. Although most of the speeches included in this list are from people in some way connected to media/tech, I felt that this speech just had to be included. In it, Admiral McRaven offers ten life lessons based on and supported by aspects of his NAVY SEAL training.

All ten of his lessons, and the stories that accompany them, are worth watching, but here are a few highlights: