12 Tips for Writing With Unforgettable Personality

A writing personality is just as real, unique, and nuanced as your personality in everyday life -- except you only release it when you create content. And if you can create content that brims with personality, I guarantee that people will love reading it. They’ll come back to it again and again. They will share it.

Your personality becomes your authentic signature, a trademark that appeals to your target audience. Not to mention, it'll serve as a source of incredible brand power and potential.

Want to let yourself shine through in your writing? Check out these 12 methods for writing with unforgettable personality.

12 Methods for Writing With Unforgettable Personality

Neither of these is the right approach. You can’t “follow the rules” and expect to have an unforgettable personality. Nor can you try to force a personality that isn’t yours.

You have to discover and shape your own personality in your writing. It takes time and effort, but it’s possible. Each of these tips will help you do just that.

To have a consistent writing personality, you need to start by having a consistent area of focus. This can be something broad like marketing or more specific like social media. The important thing is that you're not all over the place.

After all, one of the basic tenets of content marketing is dominating a niche. This aids your SEO and your entire digital marketing effort.

Food blogger Ree Drummond is a great example of a writer who has a clear topic. She could write about anything and do a darn good job, however, she uses her writing personality to focus on one topic, and one topic only. 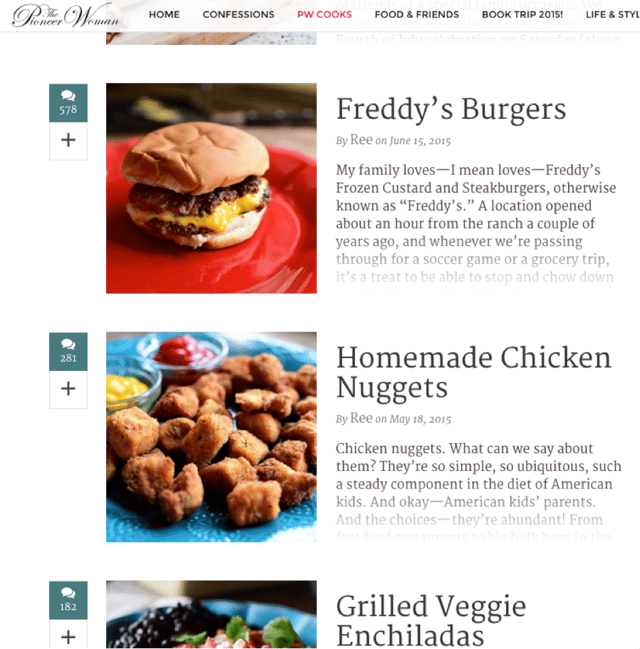 Some people are inveterate rule breakers. And that’s okay. While we don't recommend you throw grammar out the window, breaking a rule every once and a while can serve as a great way to amp up your personality.

What kind of grammar rules should you break? It depends. Here are some common ones:

Again, be careful with rule-breaking. If you’re frivolous with your grammar, people may start to suspect your intelligence rather than respect your personality.

I like what T. S. Eliot, an iconoclastic poet, wrote about rules:

4) Get to know your audience better.

The principal group of people who should shape your personality is your audience.

Why? Because they are the ones consuming, accessing, and subscribing to it. Make sure that your personality does not cross their boundaries of proprietary, offend their sensibilities, or rub them the wrong way.

Comedian Milton Berle used to tell five one liners at the beginning of each routine. Based on the laughter from each one, he would know how to shape the rest of his routine.

His overall personality was, of course, funny guy. But he tailored his funnies to the particular audience.

You can do the same thing with your writing. You don’t need to reshape your entire personality, but you should adapt it to your specific audience. And the better you get to know your audience through social media, blog comments, in-person interactions, and research, the better you’ll be able to tailor your personality to them.

5) Highlight a personality trait that you have in real life.

Your writing personality isn’t exactly the same as your real life personality. Writing and in-person interactions are intrinsically different. However, there is usually some overlap.

If you’re known as a smart and serious individual in person, then your writing can convey that. If people know you as “the funny guy,” then let your humor shine through in your writing.

It’s your personality. Own it.

Matthew Inman of The Oatmeal creates hilarious content and comics. 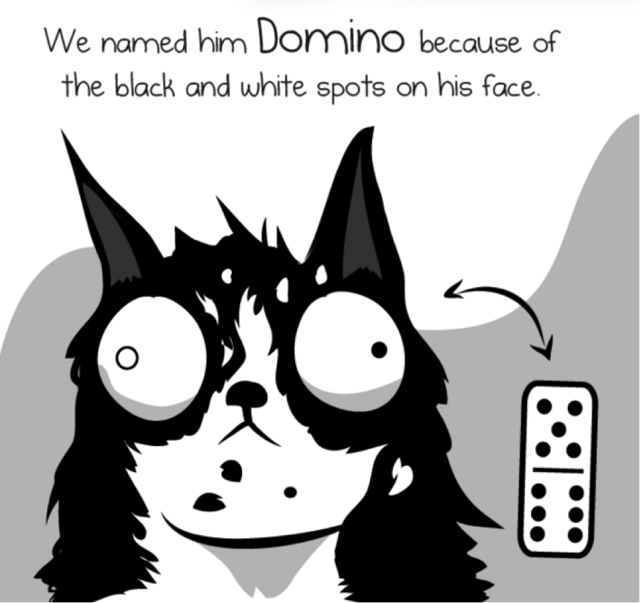 People expect Matthew to be a funny guy. And he is.

The lesson? If you find a way to infuse your writing with your real life personality, go for it. After all, people like reading content that feels like it has actually been written by a human.

To truly own your personality, you have to talk about yourself. Many successful bloggers and writers aren’t afraid of using “I,” “me,” and “my.” It’s not self-centered. It’s just a natural way of communicating.

Michael Hyatt runs a successful blog that reaches tens of thousands of people. His writing is personal, and he refers to himself.

Take this recent post as an example. He refers to himself seven times in the first few sentences. 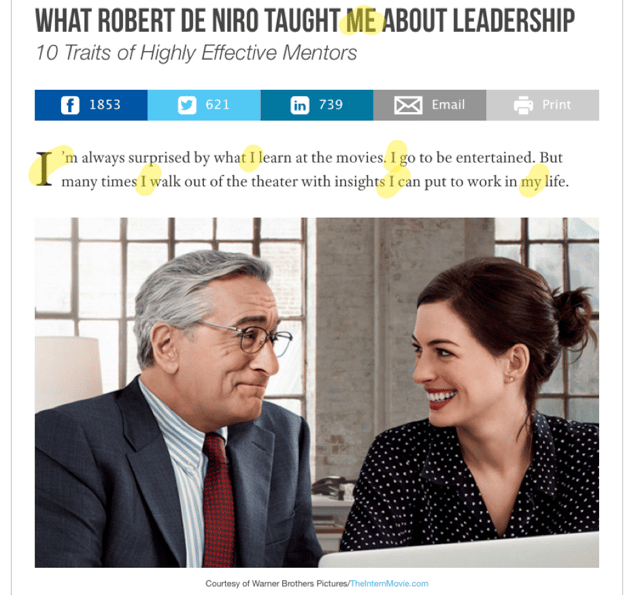 While this is a great way to show off your personality, it's important that you also remain focused on your readers. And their wants. And their needs. Inserting yourself into your work makes it easier for people to connect with you, but at the end of the day, you're creating content for them, not you.

Writing like you talk is generally a good idea. Obviously, you want to cut out useless filler words. “Um” and “uh” aren’t necessary in writing.

At the same time, your style of speech is a mark of your personality. If you’re sarcastic, gentle, incisive, crude, bombastic, or use outrageous expressions, shake a little bit of this into your writing.

Don’t allow your personality, whatever it is, to throw off your organization.

Good writing is inherently organized. If you have a disorganized and scatterbrained personality in real life, don’t try to import this into your writing. People don’t like to read scattered and disorganized content. Create an outline and stick to it.

Tim Ferriss is an example of someone who writes brilliant content. Often, his articles are far-ranging, discussing things like chickpeas and angel investing (like this one). 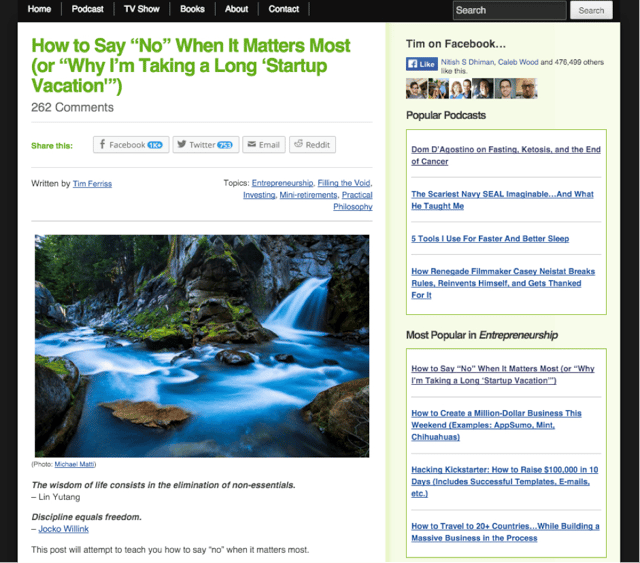 However, Ferriss maintains a well-ordered structure in each article. His personality is evident in the way that he can move from subject to subject while keeping his outline intact.

To create personality, find a trademark technique that you can use every time you produce content. One of my trademarks is asking a question at the end of every article.

James Clear’s trademark is starting each article with a true story from history. 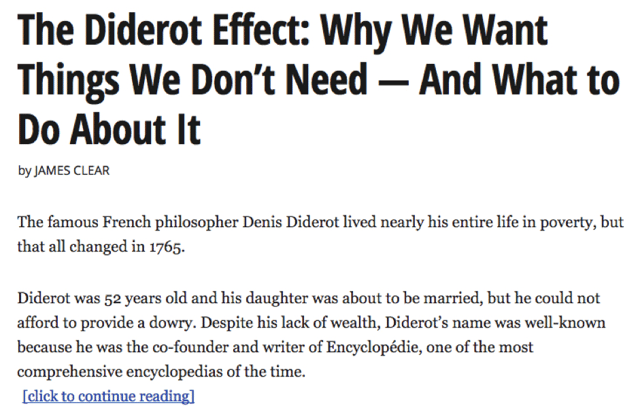 Here’s one of Clear’s articles, in which he tells the story of Robert Wadlow:

Clear’s next article starts with a story, too. 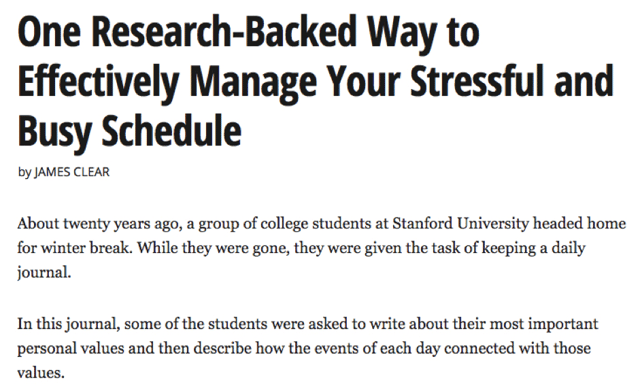 Clear’s readers have come to know and expect this style. It’s his consistent trademark, and an excellent facet of his writing personality.

When you enjoy the way that you write, you know you’re hitting a personality stride.

Blogger Crystal Paine explains in her book, Money Making Mom, that when she wrote about her daily life, challenges, and similar topics, she found fulfillment and joy.

Her readers could tell a difference, too, and they responded with strong affirmation.

While Crystal still posts about daily deals and giveaways, her best posts are the ones that are filled with her personality.

A post about daily stress garnered lots of shares:

But a post about a daily deal was less impactful:

If you’re forcing it, people can tell.

Ramit Sethi is completely authentic in his writing. His personality is everywhere. You read a single post, and you practically feel like you know him. 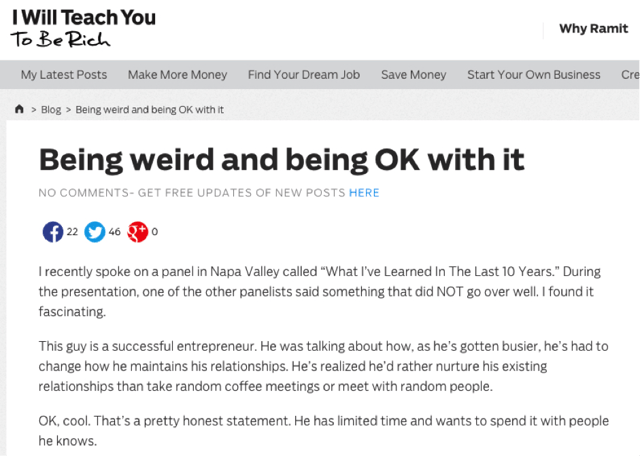 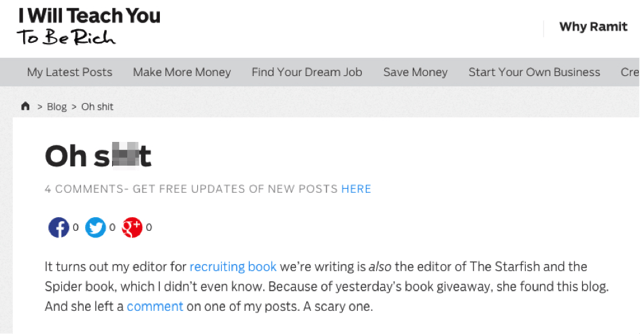 This is his personality, and he’s being authentic. While this might not work for every business or industry, inserting a bit of authenticity into your writing can help to make it more relatable.

Seth Godin is a brilliant writer. Even though a lot of conventional content marketing wisdom says to create long-form, image-heavy content, Godin doesn’t go for it.

Instead, he creates bite-sized articles with no images.

Is that okay? Yes. Because it’s his style.

(Besides, Seth Godin is basically the king of marketing, so he gets to write some of the rules.)

Finding your style and sticking with it will serve you much better than flitting off to create a new personality, even if it does seem better.

Ready to let your personality shine?

You are you, and your writing needs to have your fingerprints, timbre, voice, and personality all over it. Unleashing that personality in your writing starts with knowing it, owning it, and not being afraid to let it loose.