Virtual Reality Could Become Ubiquitous. But Can It Be Monetized? 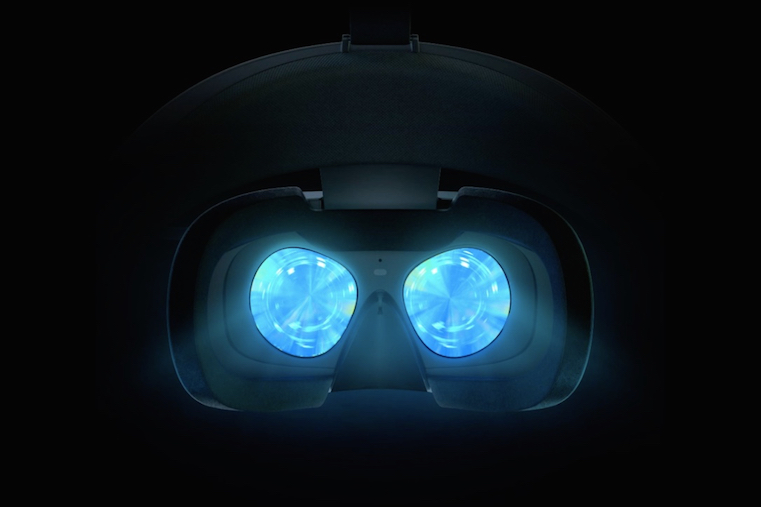 The other day, someone asked me if I'm "bullish" on immersive technology.

At the very least, it could be said that I'm rooting for the technological underdog of sorts that is XR: an all-encompassing term used to describe virtual, augmented, and mixed reality (VR, AR, and MR, respectively).

I've written on reasons to care about it. I've written on business and marketing cases for it. And now, I'm here to cover recent survey findings that say some industry experts believe XR will become mainstream within the next six years.

That last piece comes from a recent report published by Perkins Coie LLP and the XR Association, which found that in a survey of immersive technology professionals, 86% believe that XR "will be as ubiquitous as mobile devices in the consumer market."

But where, again, do marketers, growth companies, and businesses in general enter the XR picture -- and will they find ways to monetize it?

Here's a closer look at how some additional findings from the report could answer that question.

How the Future (And Potential) of XR Is Currently Viewed

To understand XR's current monetization models -- and where they could be going -- it's first important to cover two things:

We'll start with the former. As previous research has found, VR is presently gaming-centric, in terms of both how it's used and how content is developed for it -- leading to a vicious cycle of supply and demand.

It was at last week's Game Developers Conference, for instance, that Oculus -- a virtual reality company acquired by Facebook in 2014 -- unveiled its latest headset: the Rift-S, the official page for which contains gaming-rich language, like "Blast, slash and soar your way through our incredible VR gaming library."

Findings within the Perkins Coie report align with the immersive technology sector's focus on gaming, with 48% of respondents saying that they're developing video games over other types of VR content.

Gaming also seems to be where most respondents -- which included tech executives, XR startup founders, and advisers -- expect to see the most XR investment in gaming, and see it as the most relevant area of immersive technology. 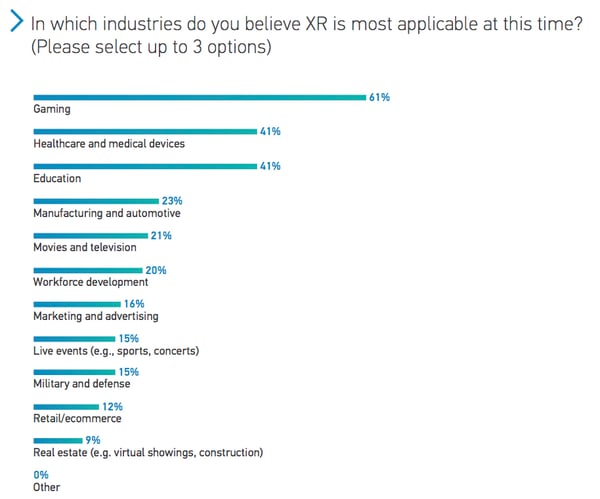 Despite some survey respondents indicating optimism in some areas of XR content creation, they also identified obstacles standing in the way of this immersive technology going mainstream.

The most common barriers identified for both VR and AR technology were issues pertaining to user experience -- hardware that's cumbersome, and technical glitches with it even once it's acquired.

It appears that a fair segment of XR industry professionals do have concerns over immersive technology content that is lacking in both quantity and quality. But if that's the case -- why is it that the majority continue to develop content for one category: Gaming?

Following that leading concern was one pertaining to the breadth of content, with an average of 21.5% of respondents saying that XR is currently falling short in quality and selection of content.

That points, however, to the figures cited above. It appears that a fair segment of XR industry professionals do have concerns over immersive technology content that is lacking in both quantity and quality. But if that's the case -- why is it that the majority continue to develop content for one category (gaming)? 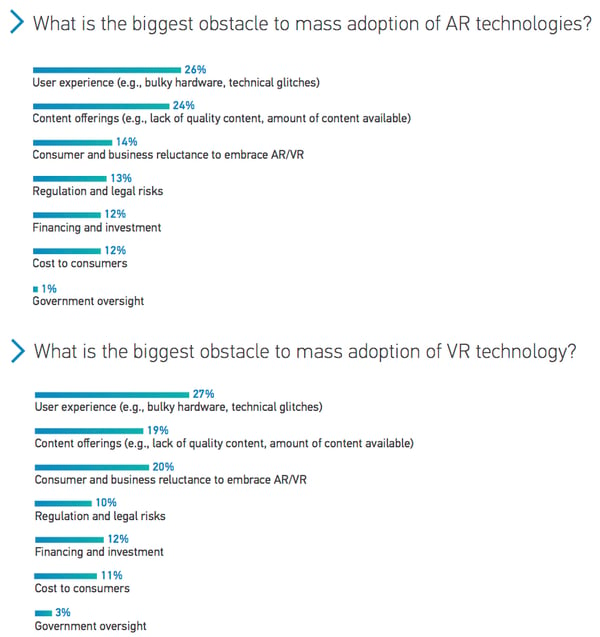 The question points to yet another area of concern among survey respondents over mass adoption of XR, which is "Consumer and business reluctance to embrace AR/VR." In other words, part of the audience questioned seems to believe that not enough people -- whether in the consumer or professional sector -- care enough about VR to try to buy into it.

But at the same time, more than half believe that the biggest investment in XR will be in a single category -- gaming -- which raises another question: If investors and industry professionals alike are worried about the scale of audience adoption across businesses and consumers alike, should the developed use cases for this immersive technology be more diversified?

Can XR Be Monetized?

When the topic of monetization is broached -- especially where content is concerned -- there are typically two models that come to mind:

Take, for example, streaming video or audio entertainment platforms -- such as Spotify and Hulu -- which provide users with free options that are supported by ads, or ad-free options available for a subscription fee.

But can immersive content be monetized in the same way?

For the Perkins Coie report, it seems that the audience surveyed is currently monetizing its XR products and services largely in the same way -- through subscription sales, in-app purchases available for a fee after free content has been initially downloaded, or advertising by way of in-app ads or product placement.

The exception, however, are hardware sales -- such as the sale of headsets used for something like VR or MR in the first place. While that wasn't directly listed as an answer option within this survey, 48% of respondents did say that their largest source of monetization is or would be the "sale of products or subscriptions."

Where XR Monetization Can Go From Here -- If Anywhere

What's particularly intriguing, however, is the 69% of respondents who said they monetize (or plan to do so) via some form of advertising, including product placement.

Just shy of a year ago, Ilyse Liffreing of Digiday wrote a piece arguing that "VR ads are still a long way off."

"Unlike with other types of content, VR cannot be repurposed quite as effectively for other channels," Liffreing wrote, "unless a company counts uploading a 360-degree version of a VR film to YouTube or Facebook as repurposing."

Unlike with other types of content, VR cannot be repurposed quite as effectively for other channels, unless a company counts uploading a 360-degree version of a VR film to YouTube or Facebook as repurposing.

She went on to quote Barbarian creative agency CTO Chuck Fletcher, who told her, "Interruption advertising in VR sounds like a horrible proposition. Imagine how long a 30-second ad spot feels when you have no choice but to take it in, with no fridge or pee break possible."

But a simple Google search for "ads within VR" yields results for at least a handful of XR-specific ad agencies, all boasting their unparalleled capabilities in creating immersive promotions -- in some cases, without disrupting the user experience.

In some cases, this lack of disruption involves a creative form of the aforementioned product placement -- for example, by placing virtual ad billboards within a VR experience. Here's how one XR ad agency, Admix, did that to promote the NatGeo series "Mars."

It's not impossible, then, to monetize XR by way of ads -- though considering one of the biggest aforementioned barriers to mainstream market permeation is user adoption, Liffreing could be right -- and it could be "a long way off."

AR as the Next Monetization Frontier

Where there could be greater monetization potential for XR ad revenue, however, is in the area of augmented reality (AR).

Generally, industry experts and analysts see the adaptability of AR as greater and quicker than VR or MR -- largely do to the fact that, much of the time, it can be experienced by way of a device many of users already have (a smartphone), rather than a large, expensive headset.

In fact, 70% of survey respondents in the Perkins Coie report say they expect the AR market to surpass the VR one -- nearly half of whom expect it to do so within the next five years. 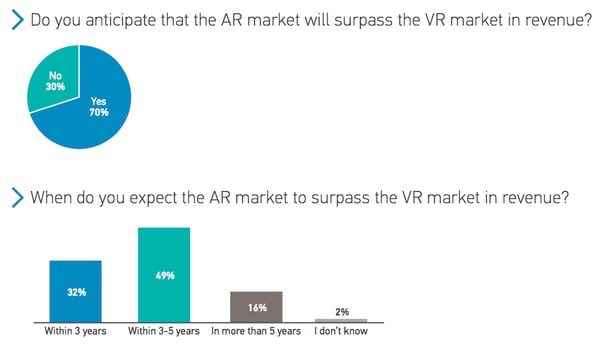 "I imagine these could come in the form of customized billboards, messages, or other calls to action for the person holding the device for an AR experience says HubSpot Principal Video Animator and Editor.

But these types of in-experience ads are in the earliest stages, and monetizing XR content -- while possible -- will face its share of roadblocks and detours.

"The simple answer to the question, 'How can growth companies and advertisers monetize the XR experience and the content?' is, 'Not easily'," Watkins explains. "But even though experimenting with this can be difficult and expensive, the opportunities are massive, and have a lot of room to grow."

What's the Business Case for Virtual Reality? Here's What the Experts Say.