Last week, a friend of mine asked me how my day was.

"Busy, but productive," I replied.

But what did that even mean? I suppose what I'd really meant was that all I did was work: I got to work early, worked through lunch, broke for dinner, and then proceeded to sign back online to wrap a few things up after that. And now that I think about it, I barely even moved.

Trouble is, that's not entirely true. In fact, countless studies have proven that some of the things we might think of as "a waste of time" -- preparing and eating a healthy breakfast, watching a kitten video, taking a midday run -- actually boost our productivity by leaps and bounds.

To help put this idea in perspective, check out the following counterintuitive productivity hacks. Sure, they may sound a little strange, but don't let that deter you from trying them for yourself.

Not only does working long hours cause health problems, but there's a wide body of research that shows productivity actually improves with shorter hours.

A 2014 study published by John Pencavel of Standford University found that how much employees get done takes a sharp drop after 50 hours of work in a week, and even more drastically after 55 hours. The study found that employees working 70 hours per week actually produce nothing more in those extra 15 hours.

What gives? Well, the more you work, the more mentally and physically tired you become. At some point -- usually around the eighth hour of work in a given day, according to Sara Robinson in Salon -- the resulting fatigue causes a drop in productivity. Unless you're invigorated by something like a critical deadline, you're unlikely to deliver to your full potential at that point.

In Jeff Sutherland's book Scrum: The Art of Doing Twice the Work in Half the Time, he writes about the threshold above which working more hours meant people stopped producing more output. It happened on a curve, he explains, which he calls the "Maxwell Curve": 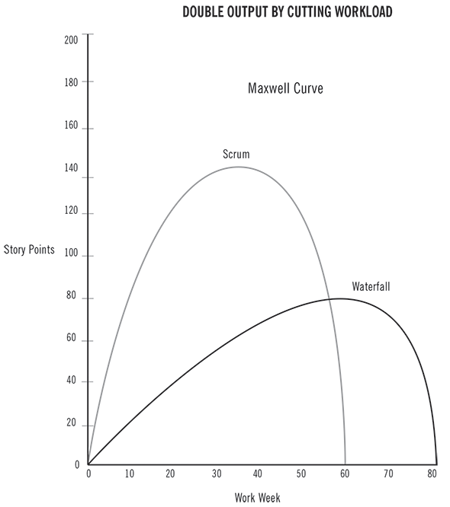 The Y-axis is productivity and the X-axis is hours of work. Notice the peak of productivity falls just under 40 hours per week, although that curve will vary for different people -- or even for the same person, but at different times in his or her life.

You might be thinking to yourself, "the faster I get out the door, the faster I'll be able to start working, and the more I'll get done." Not so fast, though. What we eat -- and whether we eat -- actually has a direct impact on our performance at work.

We all wake up with low blood sugar first thing in the morning because we've technically been fasting for the past eight or so hours. That means that many of us wake up feeling tired, sluggish, apathetic, and even a little irritable. While your morning coffee can give you a solid caffeine boost, you're likely in for a crash later that'll harm your productivity.

Instead, opt for healthy breakfast foods with the fiber, protein, vitamins, and minerals that'll give you the energy you need to start a productive day. Foods rich in vitamin B -- like oatmeal, bananas, pineapple, and avocados -- can help improve your concentration. Avoid breakfast foods with added sugar like sugary cereal, donuts, Pop Tarts, and even bagels. Here are some more breakfast food ideas from our productivity diet infographic: 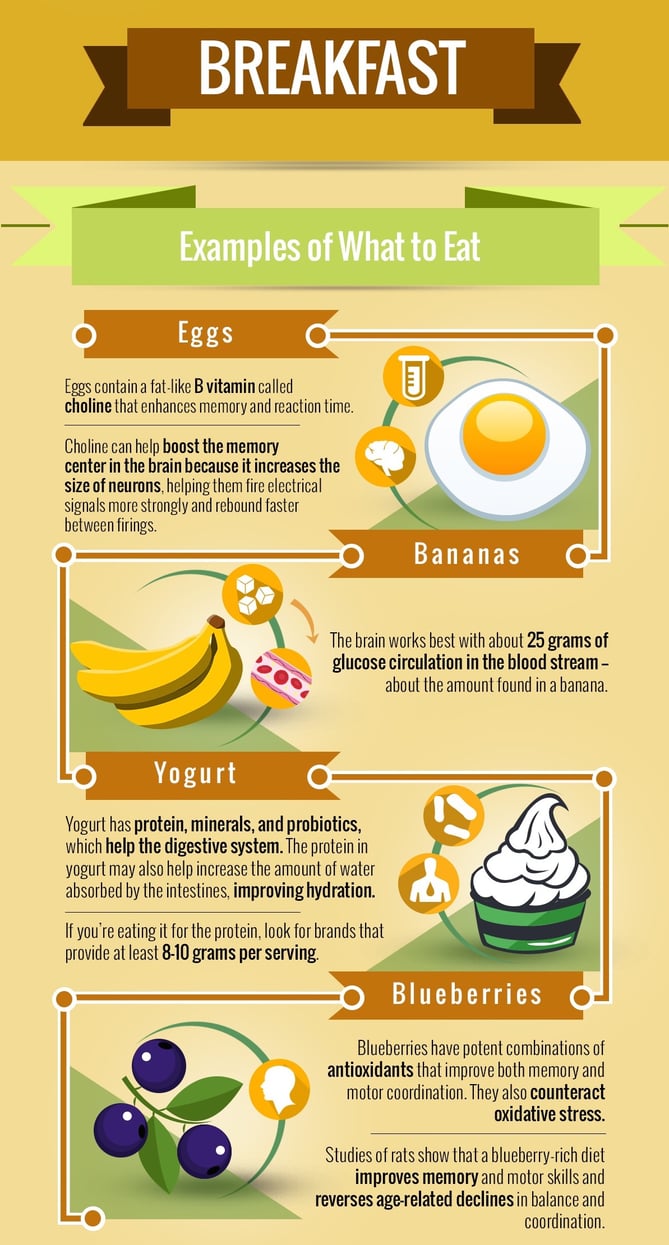 The rumors are true: You need an adequate amount of sleep if you want to get more work (and better work) done throughout the day. So before you hop back online after dinner to keep working, think twice.

Not only does lack of sleep have both long- and short-term health implications, but it's also a big, big productivity killer. According to a study from the Journal of Occupational and Environmental Medicine, sleep-related reductions in productivity cost $3,156 per employee with insomnia, and averaged about $2,500 for those with less severe sleep problems.

How much sleep do you need to be productive? It varies a little from person to person, but not as much as you might think it does. Only 1–3% of people can actually pull off sleeping five or six hours a night without their performance suffering. In fact, most adults need seven or eight hours of sleep per night to operate at peak productivity the following day. Read this blog post for tips on getting the most out of your sleep.

4) Stop being a perfectionist.

Perfectionism, while helpful in certain contexts, can be a major roadblock for productivity. Yes, there will always be something you can do to make a piece of work a little better. But what are you sacrificing by making minor improvements? At some point, you should be asking yourself: When is good enough good enough?

Keith Frankel wrote a thoughtful piece on our blog outlining a formula for "good enough." He wrote about how he used to think of "done" as spending "every possible moment working on something -- improving, polishing, and refining it -- until I absolutely have to ship it." But that wasn't realistic. Here's the formula for "good enough" that he came up with:

Once you come to the point where you feel comfortable deciding something's good enough to move on ... just move on.

In a recent article for Jezebel (warning: NSFW language), Tracy Moore took a humorous yet science-backed stance on why we should take breaks regularly. Apparently, only one in five people actually leave their desks or the office for a lunch break. NPR took a look at the consequences of this, and found that staying in one place all day is "bad for thinking, bad for creativity, bad for productivity, [and] bad for your body."

It doesn't even matter if you eat during that lunch break -- "you just need to get out," Kimberly Elsbach, a professor at the University of California, Davis Graduate School of Management who studies workplace psychology, told NPR. "And it doesn't have to be between 12:00 P.M. and 1:00 P.M. to have a positive impact. It can be just going outside and taking a walk around the block. That in itself is really restorative."

There's a reason many modern workplaces boast nap rooms in the office: It's to boost employees' productivity during the rest of the workday.

How? While a nap won't make up for a poor night's sleep, studies show taking a power nap in the middle of the day can help you process new information and even learn new skills. One study by NASA found that a 26-minute nap can boost productivity by as much as 35% and increase alertness by 54%.

If you find it impossible to take a nap in your work environment, try taking a break to take a walk or even daydream.

I'll never forget the day in 2012 when a study by Hiroshima University in Japan blew up the internet. It found that the simple act of viewing images of cute animals can significantly increase your performance on tasks involving concentration. 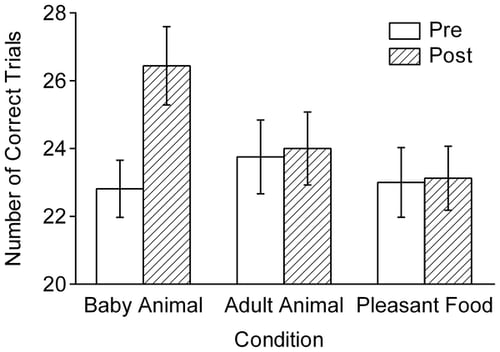 In a hilarious medley of simple and technical language, the study concluded that "cute objects may be used as an emotion elicitor to induce careful behavioral tendencies in specific situations, such as driving and office work."

Many of us find it hard to concentrate when our desks look like a tornado just went through. The papers, the crumbs, the piles of books we're never going to read ... it can all cause quite a bit of stress, and has actually been proven, in some cases, to undermine our productivity.

On the other hand, some people claim to love their messy desks, and there are actually studies out there that have found, for example, that disordered environments make people focus on their goals more effectively. In the end, it's all about "being honest about your clutter style," Julia Mossbridge, M.A., PhD, and visiting scholar at Northwestern University Department of Psychology, told Fast Company. Otherwise, you'll find yourself wasting time working against your natural tendencies.

One study published by the University of Windsor in Canada looked at how listening to music affected work quality and time-on-task of software design, specifically. The study found that software developers who listened to music finished tasks more quickly and came up with better ideas than those who didn’t -- but for a very specific reason: because the music improved their mood.

“When you’re stressed, you might make a decision more hastily; you have a very narrow focus of attention,” said Teresa Lesiuk, who headed the study. “When you’re in a positive mood, you’re able to take in more options.”

The study found that personal choice for what you were listening to mattered a lot. After all, if you don't like classical music, why would listening to it make you happier? So put on a pair of headphones and check out this list of six science-backed music playlists for increasing your productivity.

While music by itself may not be responsible for a productivity boost, studies show that the ambient sounds of a coffee shop can be. A study published by the Journal of Consumer Research explored the effects of ambient noise on creativity. Results from five experiments concluded that a moderate level of ambient noise (70 decibels, which is roughly how loud the music in a coffee shop would be) enhances performance on creative tasks. A high level of noise (85 decibels, or about how loud a motorcycle sounds when it passes you) hurts creativity.

If you can't escape to a coffee shop, you can recreate the ambient buzz of a coffee shop with Cofftivity. It offers non-stop coffee shop background sounds at varying intensities, from "Morning Murmur" and "University Undertones" to "Lunchtime Lounge" and "Brazil Bistro."

11) Exercise during the workday.

Chances are, you've heard that regular exercise can do wonders for your health, happiness, and productivity. But what about exercising during the workday? Researchers have actually found that people who exercise during normal working hours are actually more productive at work, even though they technically logged fewer hours. Here are 10 ideas for sneaking in exercise at work without looking silly, from taking short "active breaks" to replacing your desk chair with a stability ball.

12) Use your vacation time.

Burnout is real, folks. When you work for months and months without taking a significant break, you risk sliding into a state of chronic stress that leads to physical and emotional exhaustion, detachment, and feelings of ineffectiveness and lack of accomplishment.

The benefits of taking time off for your productivity and work performance are more numerous than you might think. Almost nine out of ten American workers feel like time off increases their happiness -- which, in turn, can do wonders for your productivity. Not to mention 91% of business leaders believe their employees return recharged and ready to work more effectively. 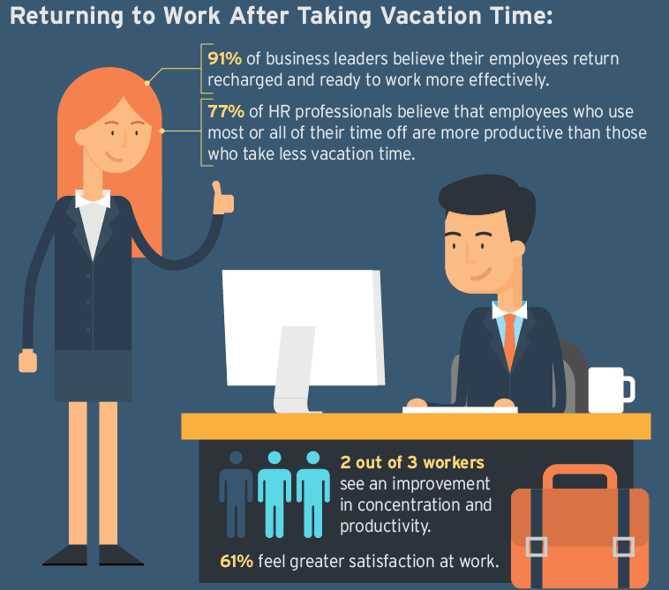 Plus, a healthy dose of time off means you'll create lasting memories with family and friends, which can reduce your stress levels and risk of depression, high blood pressure, and weight gain. But it's up to you to give yourself that time off: No one's gonna do it for you. In the end, you'll be more productive for it.

What other surprising productivity hacks actually make you more productive? Share with us in the comments.